Abbotsham School In The 1960's - a Memory of Abbotsham.

Growing up at Fairy Cross, Alwington and as our village school had closed in the late 1950s we had to catch the school bus daily morning and afternoon to Abbotsham Primary School. (Shown in the centre back of the picture next to St Helens Church). I started in 1963 in the "little ones class" of the two roomed school. Mrs Elston was my first teacher there and she had also taught at Alwington School before it closed - Miss Ball was the headmistress throughout my time there. I can remember the outside boys toilet block in the playground (no flushing then) before they were replaced later in the decade and also there was an old victorian cloakroom (never used by us then -  complete with all the hooks and very dusty and dirty because nobody went in there but we could look in through the locked gates) and after one summer holiday break we came back and found that Miss Ball had a new office thanks to the old cloakroom and they knocked a hole through the wall for the door into the classroom!!  Also towards the end of my time there after a holiday break we came back to find the new swimming pool on the block opposite the school - probably around 1968/69.  In winter when it was freezing cold there was a radiator fire in each classroom and if we got to school early we would go in and warm our hands on the top of it.  We used to get quarter pints of milk delivered each day for each pupil then in glass bottles - in winter they somtimes froze and the birds somtimes pecked through the foil tops to get  the cream at the top of the milk !! At Christmas Miss Ball always had an Advent calendar with a window opened each day and candles lit at morning prayer - very exciting when you are young! We were never much good at sport as we never had any male teachers to coach us but I remember we used to play rounders on the playing field next to the village hall and we also used the hall for some indoor events like the high jump etc. -  the parents came a few times to see our display.
Other things I recall are the desks with ink wells, blackboards and chalk, the old clock ticking on the wall that seemed to go so slowly when you couldn't wait to get away in the afternoon, the piano which Miss Ball couldn't play that well, mainly just the melody line!, and the record player with a selection of 78rpm records of mainly classical music for the "little ones" to march from their classroom down a small flight of stairs to the big classroom for morning prayers.
And of course there was the old oak tree with the seat around it where we waited for the school bus - the first to see the bus coming would yell BUS!!! and everyone would know to come right away or risk missing it.
Special times were the Christmas and harvest services in St. Helens Church next to the school and the yearly fete on the vicarage lawn where we also danced around the maypole.
Yes, village life was very simple and straightforward then and I consider myself very lucky to have lived through this period - I don't recall being stressed (don't think the word existed then), always seemed to have time to do everything without rushing and tearing, respect and courtesy were commonplace and people seemed to be happy with what they had and not worry about keeping up with anyone else.
Maybe I'm looking through rose coloured glasses as they say and it couldn't have been all good - no, perhaps not, but most of it was and it's great to be able to say that!!! 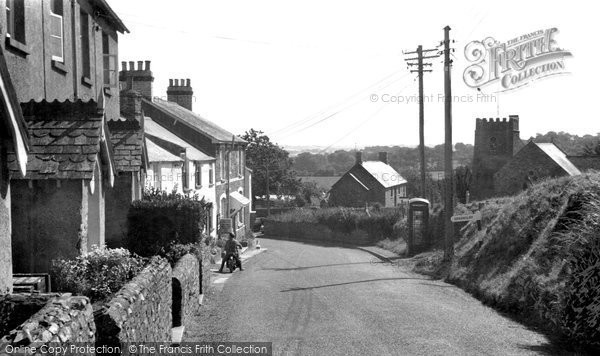 Abbotsham, the Village and Church c1960