River Roding - a Memory of Abridge.

The bottom of Silver Street on the other side of the bridge ended at the river with some railings over a drainage outlet.  This was a good place for children to get into the river from the middle of the village and paddle upstream under the bridge.  It was quite shallow in the middle of summer and small fish about three inches long with red tips to their fins could be seen at this point swimming  in the vicinity of the reedbeds.  I think these were baby Perch.  Perch grow into quite big fish as I later found out when one was pointed out to me in the Cripsey Brook up at High Ongar.  I loved paddling in the river as a child even if I cut my feet on bits of glass.  I found the underwater life very interesting and would spend whole days down by the river.

At the time this photo was taken the bridge had not been widened to accommodate two lanes of traffic, so traffic had to take turns from either direction to get over the bridge.  Also there was no footpath.  There were large granite bollards set against the walls of the bridge to stop vehicles' wheels damaging the parapet.  It was extremely difficult for large lorries to turn from the village side of the bridge to cross the river.  The widening must have taken place in the early 70s.

The building on the left is the back of the White Hart public house which has now been turned into flats.  Of the three pubs in the village, the White Hart was the least interesting.  It did not have the cosey character of the Maltsters, or the billiard table, dartboard and stuffed boar's head with red light bulbs for eyes which flashed on and off that the Blue Boar possessed. 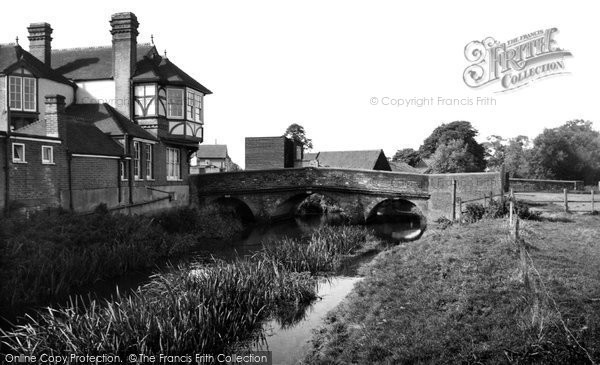