Ww2 Memories At St.Catherine's - a Memory of Almondsbury.

I boarded at St. Catherine's from 1942 until 1948, which I believe was connected to Middlesex County Council during that time. I was 3 years old when I started, my home was in Victoria Square, Clifton and my parents were both involved with the Services. The name Cooper sounds familiar for the Principal but I cannot be sure. He was a professor at Bristol University and his wife & daughter ran the school. I seem to think that the oldest pupils would have been 10 or 11 years, boys and girls and probably numbered less that 40 in all. We shared large dormitories and I remember being confined in isolation to a small room - the San - above the front door to recover from measles or chicken-pox.

I remember that the tower was used by civilian volunteers for aeroplane spotting and that there were lots of cards with aeroplane silhouettes for recognition purposes. Someone refers to the homemade concrete swimming pool which I remember well, a static water tank - no circulation pump - that we filled in spring and emptied and cleaned in autumn; it must have been filthy by the end of the summer. The girls were allowed to wear costumes, but the boys had to swim naked. I also remember clearly a vintage motor garaged on the RHS of the building which we played on and slowly dismantled. There was an avenue leading from the back of the building to the escarpment overlooking the Severn valley and I remember well the Cattybrook Brickworks, the many dens we made in the woods leading down the escarpment and dropping pebbles down the smokestacks of the steam engines as they passed under a bridge.

The very cold winter of 1947 is vivid in my memory; there was no central heating, just a log fire in the large room overlooking the lawns at the back. My hands had to be permanently bandaged because of chilblains. During the summer term no one wore shoes, we just ran around bare-footed and when we went home at the end of term my mother had great difficulty in getting me to wear shoes; the soles of my feet were like leather.

My memories are all very happy, great cameraderie, boys in gangs and lots of fights. My collarbone was broken twice whilst I was there. It was a time of food rationing, of course, and some of us were encouraged to become vegetarians, me included, so that the school would get more eggs and cheese; my mother was furious when I got home at the end of term. I remember that each child was given his or her allowance of jam, sugar and butter (2 ounces!) every week on a Monday and mine had always been finished by the Tuesday! I can't remember much about the food except the amount of swede we were given, which I still dislike, and the dried bananas.

The only other name I can remember is my best friend, David Chalk and the schooling could not have been too bad - we even learnt Latin - because when I left in 1948 I successfully passed an entrance exam for a preparatory school in Sutton, where a young Colin Cowdrey was scoring centuries at the age of 7!

The principal's wife or daughter was very 'arty' and encouraged us to paint and act. I remember playing one of the children of the 'old woman who lived in a shoe' at the Colston Hall in Bristol. I still have a photograph of the cast involved in a drama about the slaying of a dragon. I remember sketching one of the cottages near the entrance to Knole Park and being well rewarded by the lady of the house with scones and jam!

Although I cannot remember a school uniform I did have a cap with a badge of a Tudor rose, which I've still got somewhere.

I returned to Knole Park several times during the 60's and 70's and as one of the other correspondents has noted, found the front door open on one occasion. The building had obviously been vacated for some time with accumulated rubbish and broken windows, and I imagine that it was demolished soon after, apart from the tower. I always understood that there is a reference to the tower in the Domesday Book.

Many happy memories of a healthy and trouble free childhood

Thu Dec 21st 2017, at 11:18 pm
clivewood48 commented:
I was at St Catherine 's between 1955 and 1963. My name is Clive Wood .
Ralph Cooper or should I say Prof Ralph Cooper was a good and honest man. Fair but strict. His wife , Joyce Cooper's mother lived in Clifton and we often visited .
The school has been destroyed but the tower still stands. I have visited at least 3 times.
Add your comment
Report abuse 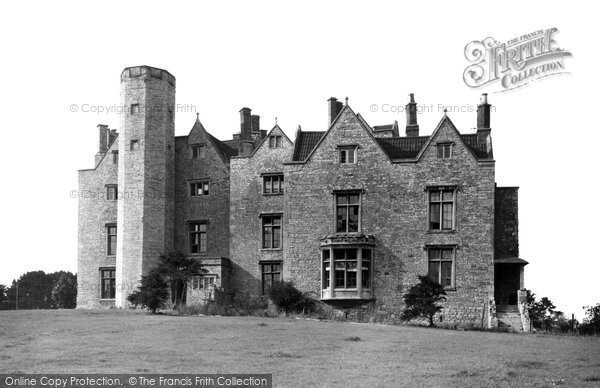