War Memorial - a Memory of Amesbury.

I remember the War Memorial being opposite the cinema. When I visited Amesbury last week no one could remember it being there and it is not there now. Does anyone else remember it? I also remember the railway bridge where we all stood letting the steam from the trains blow over us. There was a huge park, well it seemed huge back then, near a cemetery. Are my memories correct I wonder? We lived on the RAF base at Boscombe Down to start with and then we moved to the new council estate in Amesbury. Solstice Rise was the name of our road and everywhere was surrounded by fields unlike what I saw last week!

Sun Jan 21st 2018, at 4:08 pm
Dennis Hall commented:
I was stationed at RAF Boscombe Down on two occasions the first for a relatively short period for training préparions for the RAF contingent in the 1953 Coronation, and for one year post one year later. I became fairly familiar with the region my motor cycle assisting me with certain considération especially the sunny summer Sunday afternoon when inspired perhaps too much by the legendary Rolland (Rollie) Free, Head down, I exploited that long straight ´A’ road that went by Stonehenge which was on my right heading towards Amesbury, to reach 96 mph
(and no crash-helmet either in those days! I think afterwards I vowed never ever to be so foolish again! I think it was the experience of realising that one big problem at that speed was keeping my feet firmly upon the footrests and that had that firm contact been lost all would have been lost! Thus, a lesson well learned and in good time I thought!
But to the point ie of how places change over time and with memory sometimes making strange recording in one’s mind. A few years ago I paid a visit to Amesbury aiming at making an approach to the Station Main Gate from the Village via the small road that went uphill for precisely one mile. That was clear in my mind because that was how it had been from the bus stopping at its terminus in the Village and the road sign that beheld us all with the single number « 1 » or was it « 1 mile » to the Camp. But none of that exists anymore, all the roads inevitably have been expanded and rebuilt and changed out of all recognition at least from Memory’s point of view, and with the additional housing in the area too, to confuse matters further. There not being many people around on that day my sole acquaintance to sound out for help was a milkman on his delivery rounds and I approached him with certain confidence that he would know and set me on good course. How wrong I was and how bewildered I became when it became obvious he had no idea of what I was talking about!
I didn’t give up though, but I certainly did feel absolutely lost as there was nothing of any kind that looked familiar as some vestige of what used to be familiar through daily occurrenc . In the end I wandered off trying to find some kind of boundary sign of sorts, found a path and a few sheep grazing, not many but some fairly dispersed between themselves, then a clearing with some big old trees and then a wire fence! But no sign or indication of what the property was on the other side. I followed it round and the ground began to rise to go uphill and finally I came across and to my great surprise «  the Main Gate » in question! Guarded of course by two armed policemen who of course would not allow me in despite my « memory bashing » this was a different kettle of fish from my younger days there! The sacred Square was still there, now with cars parked oh what sacrilege thought I now mildly delirious after all my « despair » at not being able to reconcile past memory with the present some moments before, then post much physical effort in walking up and down hilly and tiring wild growth, all the time with eyes on the time not to miss last public transport to Salisbury, time flying so fast let it not be overlooked! But I had at least located the « Main Gate » and noted that the side buildings might be but perhaps weren’t in truth the former Guard Room which included prison cells too in my day. This time they seemed not so imposing. The old SHQ building still stood upon its site overlooking the Station Square and I reflected upon the many days I and many other old comrades drilled and rehearsed our stuff for the Annual Visit of the AOC....And then I had to go, for memories are truly made of this, that we cannot hold onto them for too long, which seems sad at times.
Add your comment
Report abuse 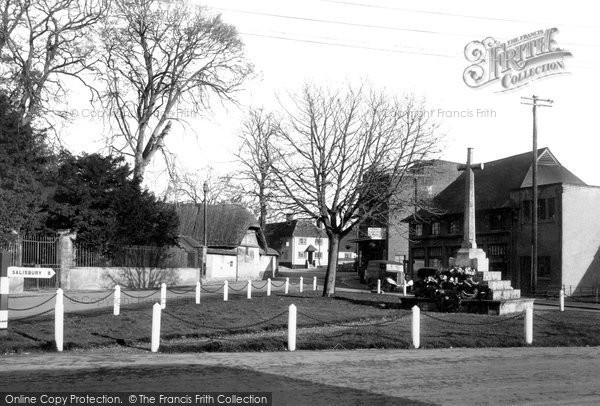