Butchers Shop - a Memory of Ampthill.

Browsing Ampthill, for the first time, I came across the above photo.  On the left just above the logo is a shop blind that used to protect the meat in the window display from sunshine (when it appeared).  That blind was the bain of my life in 1952/3/4 when I was a so called "butchers boy".  It never ran correctly on it's tracks, and I caused many a car to swerve my long pole manipulations putting it up and down.  Funny when I think about it.  The bicycle outside (possibly me pictured) was used for deliveries.  The carrier full of orders for Maulden and surrounds was a steering hazard particulary in the snow.  One Saturday morning I came to grief down Maulden hill and spent an hour scraping dirt and stones from meat with my pen knife before going on my way.  The complaints arrived back at Ampthill well before yours truly.  Oh the humiliation and all for 2/6p a week.  Humiliation was for being caught out, not for stony meat.  On the positive side the grumpy woman that lived down I think it was called "Duck Lane" never ordered meat again.
As a retiree I live in a nice environment/climate in Tasmania. 15 years ago I passed through Ampthill on a visit and I believe the butchers shop was a launderette.  That's progress for you!!!!
It has been great to reminice with the aid of the Ampthill web site.  Keep it up.
I can see my old Ampthill address, 14 Flitwick Rd on Google Earth.  How Ampthill has altered.
Anyway, Greetings from Tasmania,               Paul Guyton. 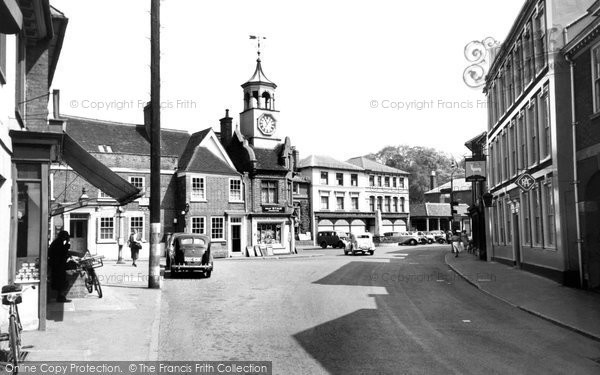