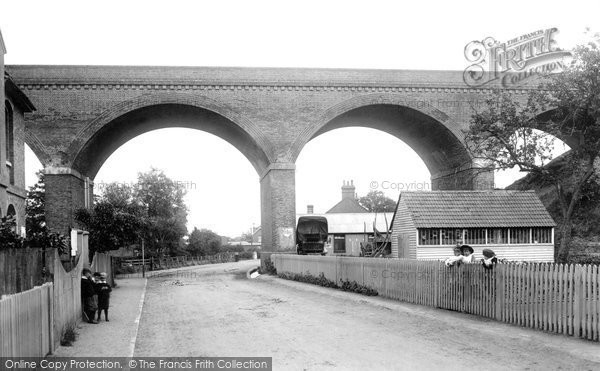 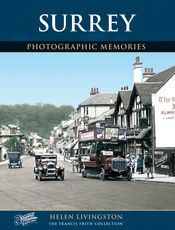 The photo 'Bagshot, Viaduct 1901' appears in this book

Caption for Bagshot, Viaduct 1901: Children idly watch the photographer - and each other - from either side of the road, and wagons stand under one of the arches in Kemp and Sons' yard. On the extreme left is Peel House, built in 1851 and once the police station.

An extract from Surrey.

Clipping The Hedge At St Annes

My dad, Eric Berry, used to clip this hedge - BY HAND! When we're little, things always seem bigger than they really are, but my recollections of watching my Dad clip this hedge on the days he did the gardening at St Anne's church, were pretty accurate. It really is as big as I remember! I also recall going (...Read full memory)

The house in the background is Pinewood, built by my great grandfather, Sir Howard Elphinstone, VC, KGB etc. He was one of the first soldiers in the Crimean War to win a VC. His VC is now in the Imperial War Museum. He was born near Riga, Latvia (then Livonia) in 1829. He was educated in Germany, before the family moved (...Read full memory)

My father was promoted to the rank of Sergeant in the Surrey Constabulary. We were moved from Coldharbour in Surrey to the police house in Bagshot. My father is Eric Shields and was the police Sergeant for Bagshot, Windlesham and Lightwater until his retirement in 1979. We lived in the police house (on the (...Read full memory)

Share it:
Back to Bagshot
Back to all Bagshot Photos