Family Holidays At Barmston - a Memory of Barmston.

My grandfather bought one of these ex-RAF officers bungalows after the Second World War so that the family could have a holiday base. In the B850004 photo, our bungalow is roughly alongside the white car you can see parked in the road - it was more or less halfway along the road. We all lived in Sheffield - in those days, a 3 hour drive away. I must have holidayed there from the age of 18 months to about 8 or 9 years old. We sold it a year or so before it finally succumbed to coastal erosion, to the Bott family from Sheffield for £50. I recall 2 other Sheffield families having bungalows too - the Spencers from Mylnhurst Road and the Marshmans.

I can still see, hear and feel the coarse, sandy grass under my bare feet, the howling wind from the North sea, the rain beating on the metal-framed windows, the light from Flamborough Head light house faintly illuminating my bedroom every 4 seconds or so at night, the sound of the waves and the smell of the sea, the ancient board games in the bottom drawer of the kitchen cupboard, the fascinating Put-U-Up that Auntie Lottie would sleep on, the marigolds bravely cheering the garden up, the ghastly and ineffectual concrete sea defences, the muddy cliffs and the cold sea, being given a twelve sided threepenny bit for being the first in the family to 'see the sea' and going to spend it at the open-sided corrugated-iron amusement arcade, being allowed to 'steer the car' sitting on my dad's lap as we drove the last 200 yards down South Cliff to the house, Uncle Cliff's cigarettes, the morning ritual of collecting a small canister of fresh warm milk from Warkups Farm in the village and the cricket matches on the field adjacent to the church.

Swifts garage on the Bridlington road was where we always filled the tank up with petrol for the journey home.  Jack Swift and his family lived near the cliffs and young Michael and I were a similar age.  There is a photo of the two of us in romper suits sitting on the Put-U-Up.  I last returned in the 1970s and found a sea eroded brick.  I brought it home and fondly imagine it may have been from our house.  But then, it might have been from yours! 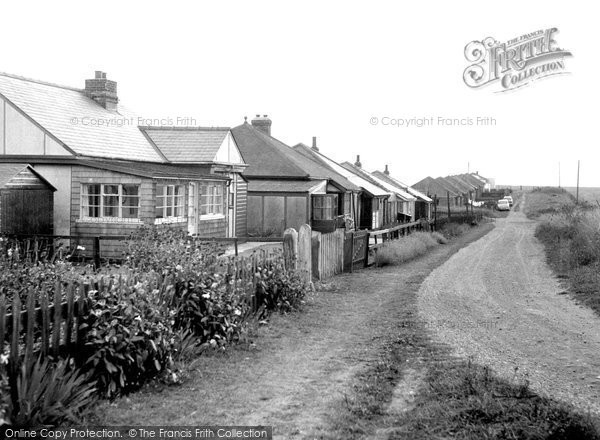