In the days before a refrigerator was in every house, freezers were still a novelty and convenience foods unheard-of, the housewife bought fresh food nearly every day. Street markets were a regular and vibrant part of the life of most towns. However, post-war Britain saw a change in people’s shopping habits, as self-service stores started to appear. The advantages were a wider range of goods stocked, and cheaper prices. There were advantages for the shopkeeper, too. Fewer staff were needed, and experience showed that more goods and more choice meant more purchases – so much so that in 1956 the government warned women ‘not to be lured into overspending’.

A national survey reported mixed reaction to self-service shops. The big store owners reported sales had doubled or quadrupled, but a majority of shoppers felt that ‘it encourages pilfering…removes the personal touch…and threatens the livelihood of small shopkeepers’. Supermarkets were still few and far between in 1956, but it wasn’t long before they became a novel and exciting feature of every town centre.

Here are some nostalgic photos of these early supermarkets in the past – some names are now long gone, like Fine Fare and the International Stores, but others are still with us, like Tesco, Waitrose and Sainsbury’s. 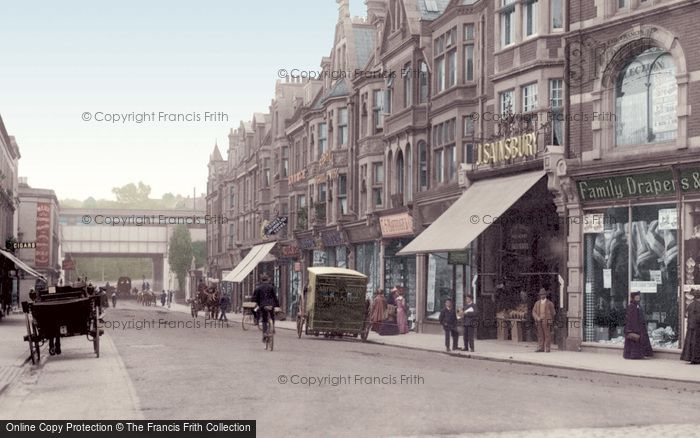 This photograph of Redhill from 1906 shows an early Sainsbury’s store on the right. Founded in 1869, by John James Sainsbury, the company became the largest groceries retailer in the United Kingdom in 1922, was an early adopter of self-service retailing, and then became one of the country’s most important supermarket chains. Today, apart from the railway at the end, this same view is unrecognisable. There are now offices to the left and new shops to the right. 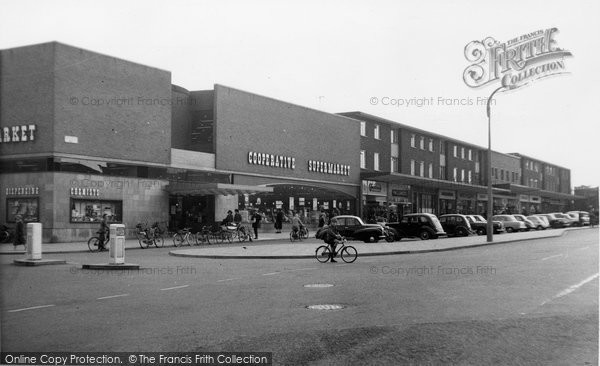 I lived in Ashby as a child. When I was 11 in 1948, Broadway was nothing more than an overgrown field, I realise now there must have been houses there that had been pulled down ready to build Broadway, but as a child all I saw was a field fronted by a picket fence. When they built Broadway it was so exciting to go in the Co-op, and climb the central stairs up to the clothing and underwear counters, the stairs were wide and had benches half way up on a wide landing, people including my mother and myself would sit and look over onto the makeup and perfume counter below." 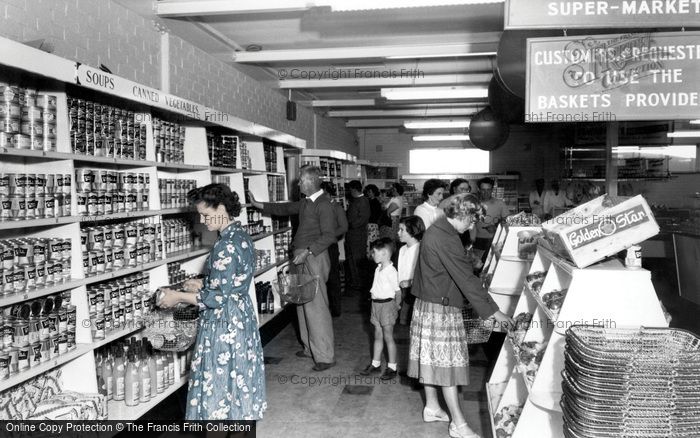 Rockley Sands was one of the earliest holiday camps. It catered for family groups who
wanted outdoor holidays with plenty of activities. For years this was Poole Council’s only concession to the tourism industry, which did well in neighbouring Bournemouth. Well-filled shelves in the camp shop provided daily basics for self-catering families. Supermarkets at this date were still a modern idea. As you can see in this photograph, there was a large amount of tinned food and soup, as most accommodation at the holiday camp did not have a fridge. 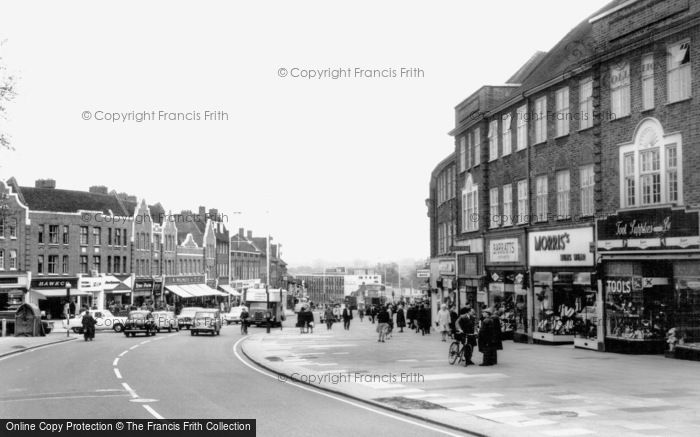 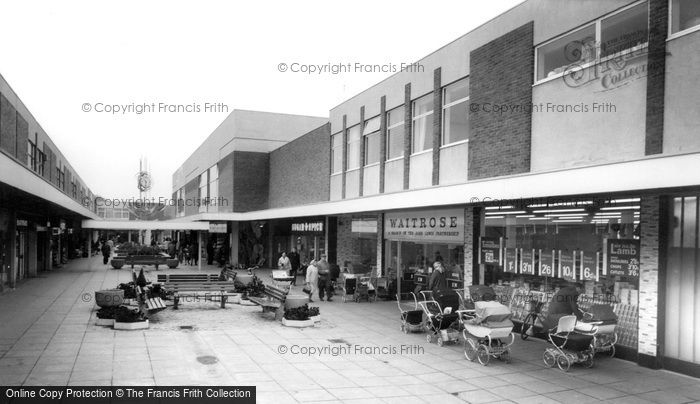 Note all the old-fashioned heavy prams parked outside the Waitrose supermarket in this photo. In those days all the mums would leave their prams or pushchairs outside the store with their precious little ones securely strapped in. It was the quite the norm then, but no mother would dream of doing this nowadays.

The shop sign for the Melia’s store is a fine example of the signwriter’s art. This was a well-known chain of high street grocery stores at this time. 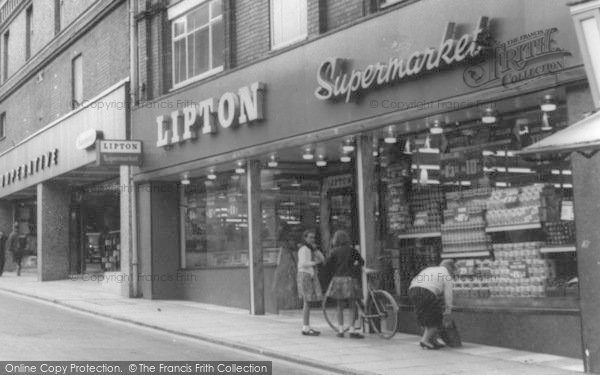 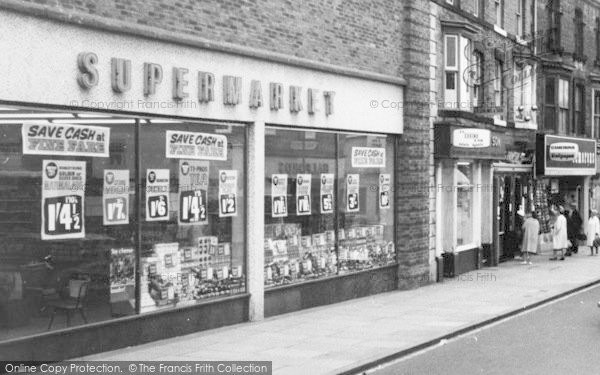 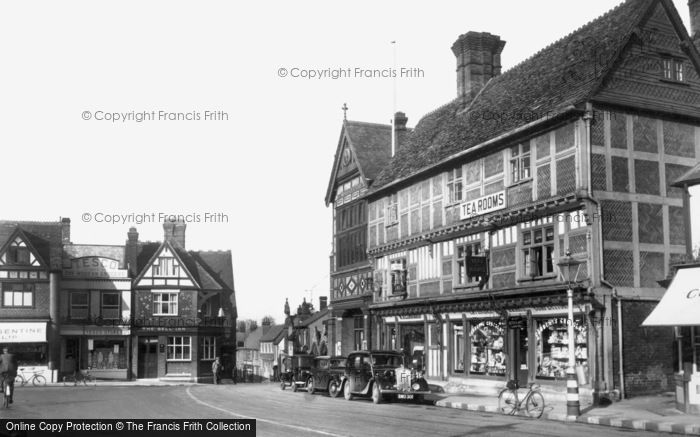 Note the variety of architectural styles in this corner of the Market Place at Wantage. The building on the right is timber-framed and infilled with herringbone brickwork. Next to the Bell Inn is a very early and picturesque branch of Tesco, describing itself as the ‘Modern Grocers’ – a far cry from today’s image of the famous store! 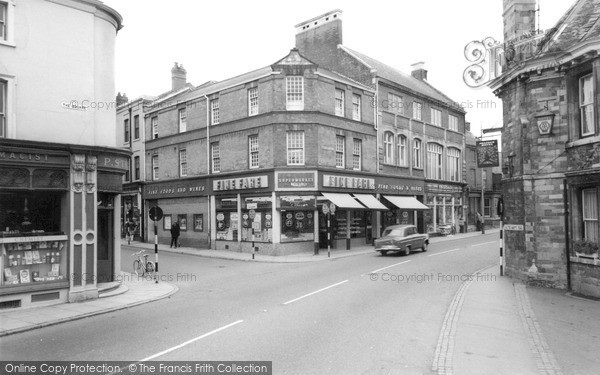 This building on the corner of St Mary’s Road and Adam & Eve Street in Market Harborough housed the Fine Fare supermarket when this photograph was taken c1965, which was the first supermarket in the town. 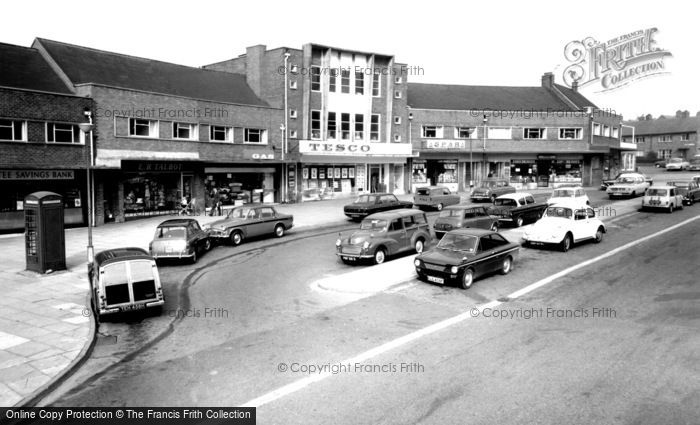 This was in the days when supermarkets complemented high street shopping, and there was still room for the smaller, independent retailer. Out of town shopping and subsequently deserted high streets were still some way off in the future.

This post has the following tags: Places,Nostalgia,Memories.
You may find more posts of interest within those tags.