Do you remember when there was a cinema in the centre of most towns in Britain? For many children in those days the highlight of the week was the visit to the local cinema for the children’s matinee – the cinema club. Oh, the thrill of the silver screen for children in the 1950s and 1960s, and the fun to be had at the cinema in the past at the Saturday morning children’s cinema club! 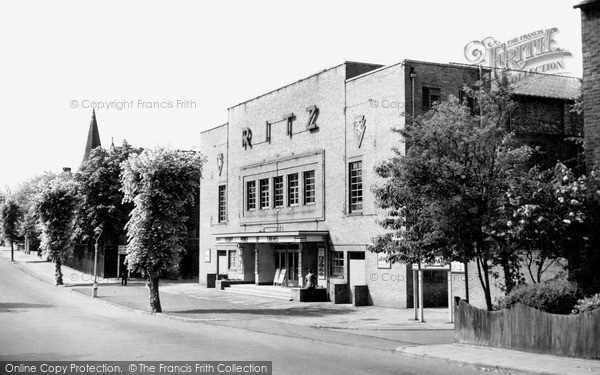 Do you remember the words to the song of the Minors of the ABC? (Sung to the tune of 'Blaze away')
”We are the boys and girls well known as
Minors of the ABC
And every Saturday we line up
To see the films we like
And shout aloud with glee
We love to laugh and have a singsong
Such a happy crowd are we
We're all pals together
The minors of the ABC” 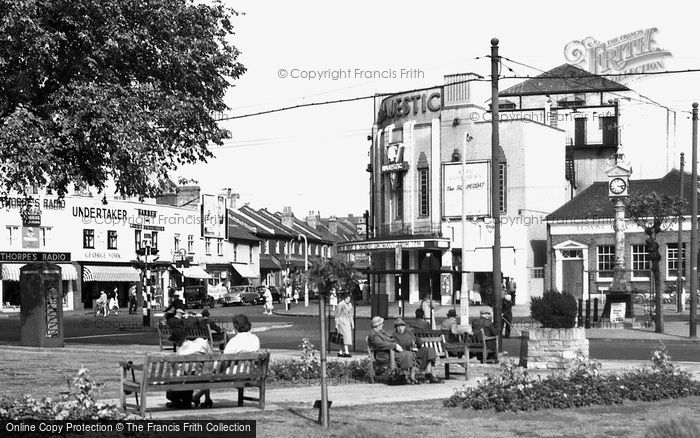 Sixpence for lollies and ice-cream
"When we were small we were given a shilling to go to the Saturday morning pictures at the Majestic in Mitcham - The ABC Minors, we were called. We even had a song we sang before the films began. Sixpence was used to get into the cinema and we had sixpence to spend on ice lollies or ice cream that was sold from the counter between the entrance and the doors into the theatre. It was always noisy in that area where you would meet up with other kids you knew and see where they were going to sit. I remember the westerns with Hoppalong Cassidy, The Cisco Kid and The Masked Ranger with Silver, his horse, and his sidekick Tonto. I also remember the cartoons Bugs Bunny, Popeye, Donald Duck and all those Warner Bros characters. I have them on DVD and my grandchildren watch them now."

A memory of Mitcham contributed by Carole Baldwin to The Francis Frith Collection website. 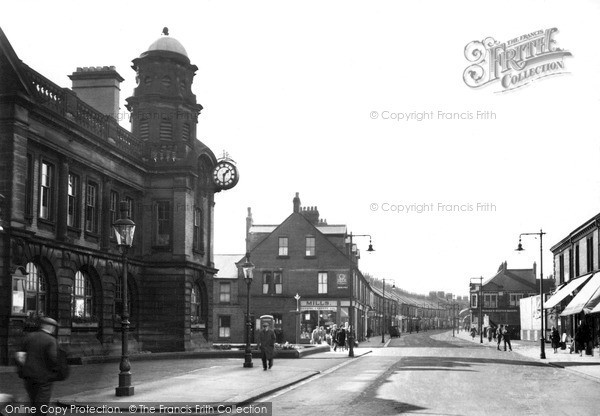 Boys and girls of the ABC Minors!
"I was born in 1951, so belong to the generation of Saturday morning cinema goers in Wallsend who just couldn’t wait for Saturdays. The choice was big in the late 1950s: the Gaumont (corner of Park Road and High Street East), the Royal (High Street East) and now the Lloyds TSB bank, the Tyne (Station Road) pulled down to make way for The Forum, the Queens (Station Road) behind Woolworth and opposite the Memorial Hall or the Ritz (High Street West). The favourite was The Ritz, an Art Deco cinema palace. I was an ABC Minor - the junior cinema-goers club - and still have the badge to prove it. Sixpence got you into the stalls and a shilling got you into the circle. With only a shilling pocket money a week at the time (£0.05) it was the stalls, threepence for an ice lolly and threepence left for the rest of the week. Happy memories. As ‘going to the pictures’ was replaced with TV in the 1960s and 1970s, the picture houses disappeared."

A Memory of Wallsend contributed by Michael Innes to The Francis Frith Collection website. 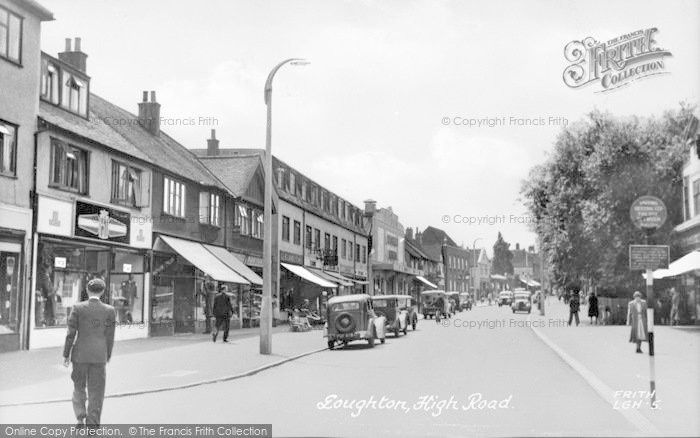 Saturday Morning Pictures
"I went to Saturday morning pictures in Loughton every week. We were members of a club with a badge that said ‘Grenadier’ as it was a Grenada cinema, though the actual building said Century over it. There was a confectionary shop next door that sold packets of fake cigarettes – they were hollow tubes with foil at one end to look like glowing ash. We filled them with talcum powder and blew it over the kids in front. They must have been very dusty!At Christmas we had a competition to make the best decoration. I won it one year, but for some reason they thought I was a boy and my prize was a kit to make a toy tank! I don’t really remember any films – it was a social event, as much as anything else. But there was always a serial; I never quite worked out that if the hero died there wouldn’t be anything on next week – was I daft, or what?"

From a memory of Loughton contributed by Susan Capes to The Francis Frith Collection website. 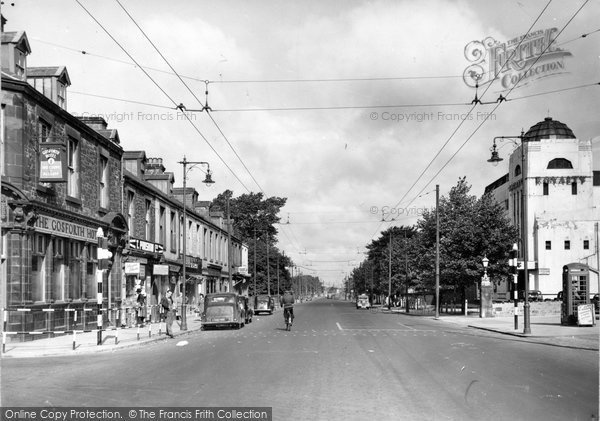 Heroes and villains of the silver screen!
"Of course you remember it ... well most of us do! It all seems so long ago now, but it’s beginning to drift up from the fog of ‘times gone by’. Hot and damp and steaming gently in the heat of the old Globe cinema at Gosforth (you sold more drinks and ice cream if you kept it very hot!), in from the rain and sitting there with our knees under chins and feet on the seat with sweaters pulled up to our eyes and pulled down over our knees so we looked like rows of strange beasts - so God help the ice cream girls! There must have been about 1,000 screaming children rooting for Roy Rogers and Trigger and hell-bent on making as much noise as possible! But they never noticed that Roy’s hat never fell off in a fight and that he had more lipstick on than Dale Evans, his love interest. They would never imagine that poor old Trigger would end up being stuffed and mounted on a plinth outside Roy’s ranch. Hands up if you remember “The Perils of Pauline”, and you must remember “Flash Gordon and the Clay Men”. Then there was “Zorro” - now there was a force to be reckoned with! We all wanted to be Zorro! After the show, there we were, galloping up the road on imaginary horses with our navy blue school raincoats over our shoulders buttoned at the neck so it looked like Zorro’s cloak, with home-made eye masks covering most of our faces, brandishing our homemade swords with bits of chalk tied to the tip - zizz zizz - at any stray dog or imaginary enemy who came across our path! We left Zorro’s mark ‘Z’ on any door or wall we passed! Zizz zizz and the deed was done, and off we went to find another enemy to fight! I suppose we could all go on for a very long time rekindling our childhood memories of the Saturday matinees that we lived for, as in many cases it was the highlight of our week."

A memory of Gosforth contributed by David Hinge to The Francis Frith Collection website. 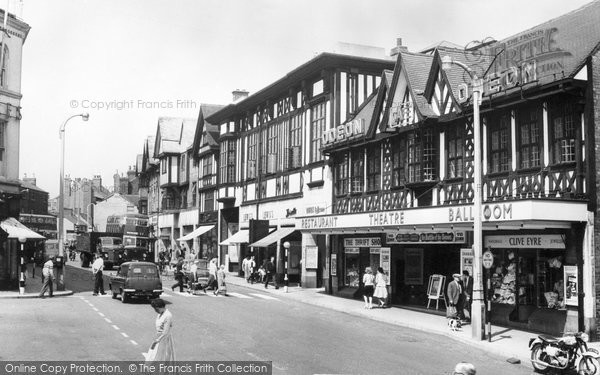 Did You Know? The Odeon cinema chain was started by Oscar Deutsch – and the acronym of the name was jokingly explained as ‘Oscar Deutsch Entertains Our Nation’! 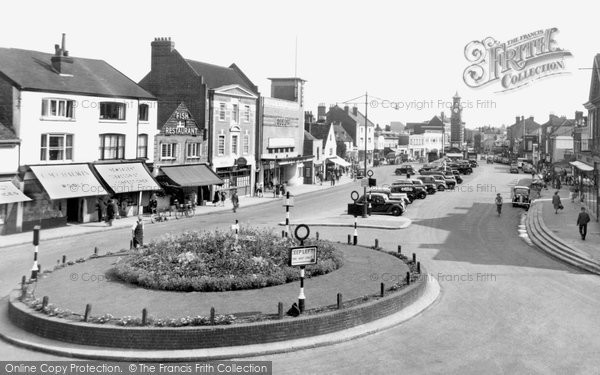 The Saturday Morning Matinee in the Cinema
"During the Second World War, as youngsters we would look forward to the Saturday morning matinee at the Odeon cinema (4th building from the left of photo of Epsom, E37053). Entrance was thruppence (three pennies). With our pocket money we would lash out on a penny peashooter with a packet of peas, the matinee used to start with a sing-along, a cartoon, then two half-hour films, the last being a western serial.
One that I remember well ends with the good guy entering the cabin and then it explodes, next Saturday’s serial shows the guy coming out of the back door just before the explosion. Bad guys always wore the black hats, this was the time for the booing, the good guys wore white hats, this was the time for the cheering! The noise was so loud the cinema manager would come up on the stage to ask the kids to keep the noise down, I’m sure it could be heard half way down the High Street.
Now, this was the time for the peashooters. Years later in 1955, when I was posted to Epsom in the Metropolitan Police, the Saturday morning matinee was still operating, with the same cinema manager. If I happened to be on the beat in the High Street on a Saturday morning he would call to me, “Constable, come and speak to these children”. Not on your life was I going to stand up on that stage!" 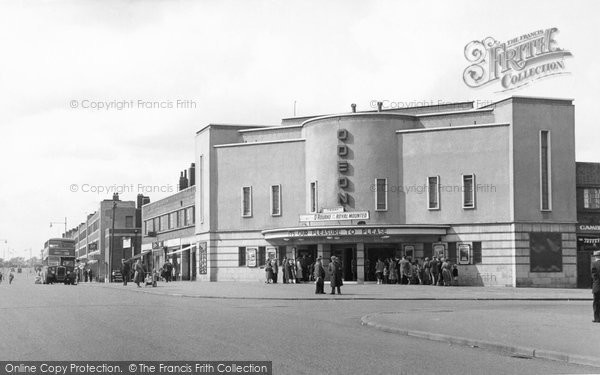 The ONLY place to be on a Saturday!
"Saturday morning could not come quick enough for our family. Myself and my brother Marty would walk 5 miles to the morning cinema show with a shilling between us, looking forward to cartoons with Mickey Mouse, on-going serials with the Lone Ranger or Flash Gordon where the end finished with the hero about to come to a nasty end that you had to come back next week to see. The shows usually started with a sing-song generated by a compere, then a different game show like eating a doughnut on a string the fastest or, my favourite, a singing contest. The first one I won was singing “She Loves You” by the Beatles. I won a big bag of mixed sweets that we shared with all our mates. I remember walking through the tough winter of 1963 up to our knees in snow to get there and being most annoyed to find the cinema could not open. I remember thinking “Well, I walked 5 miles, what’s the problem?!”. That’s how much we enjoyed our films."

An excerpt from a memory of Corby contributed by John O’Connor to The Francis Frith Collection website.

Singalongs at the interval!
"I lived in Belvedere. My sister and I would walk to Bexleyheath, crossing fields to go to the Regal Cinema. This cinema had a fine organ that came up from nowhere and was played by Reginald Fort during the films interval. Words of the songs were flashed on the screen and everyone sang along. Popular songs at the time were “When the Poppies Bloom Again” and “Her name was Queen Mary, she sailed the seven seas” etc. Unfortunately, the Second World War put an end to the organ. A bomb fell in about 1942, hitting that part of the cinema wall containing the organ pipes and electronics. The Regal was demolished in the 1950s and the site became a Bowling Alley and then Sainsbury’s Supermarket."

A Memory of Bexleyheath by Stanley Gray contributed to The Francis Frith Collection website. 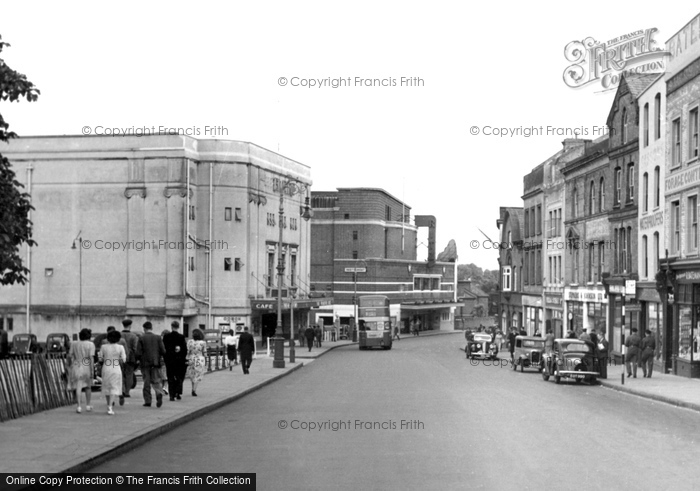 "The ABC song certainly brought back memories of my regular Saturday morning trips to the pictures in the late 1940s and early 50s. In Aldershot we were lucky that the ABC – the Ritz, and the Empire – an Odeon cinema, were situated right next to each other. We looked at each programme displayed and, depending on which film we fancied, chose the one we wanted to see. It certainly gave our mums an hour or so without having to amuse their kids at weekends!

My most vivid memories are of the huge ruched curtains which went up at the start of the show and of horrid boys who kept clambering over the seats or threw their sweet wrappers at us girls. Imagine the despair if we were too ill to attend one week and had to miss the next exciting episode of Flash Gordon or other gripping serial instalments.

Here is the kids’ Odeon song we used to sing at the beginning – as loud as we could – and the noise would be deafening! 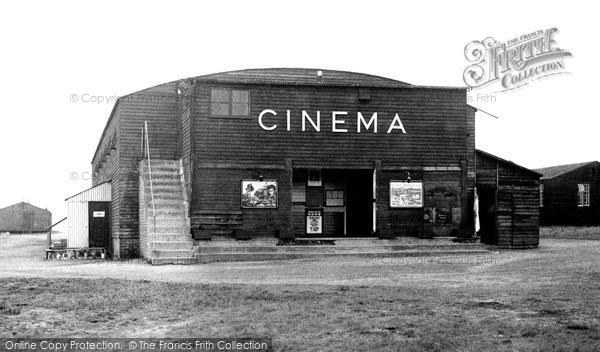