Real Holton Sparkes Of Cary In Castle Cary - a Memory of Castle Cary.

My great uncle Mr Arthur Real who was born at Axmouth Devon in 1886 and grew up there, started a business in Castle Cary Somerset with Mr Walter Holton from Trowbridge Wiltshire in the 1930s. They named their bakery business Real & Holton. Mr Holton was a master baker and confectioner and worked in the bakehouse in Fore Street from 4am in the morning until he finished his day. The first batch of bread would be ready by 8am. Mr Holton would then cycle to his home in Torbay Road to have his breakfast while the staff would take the hot bread from the bakehouse into the shop, ready, when the shop opened at 9am. My great uncle ran the business side and lived above the shop and cafe with his wife Clara. Above the shop and cafe there was a large grand front room with two windows, one a bay.  These two windows overlooked Fore Street. The view was beyond the Market House up the road, and down to the Horse Pond with an exciting toy shop opposite for us children to visit, known as Spearman’s.
Inside our front room there was an enormous marble fireplace. On both sides beside the grand fireplace there were brass handles with decorated porcelain knobs. These were to pull back to ring a bell downstairs. This drew the attention of the staff to a bell chart to identify which room the sound had come from. This was a little like "Upstairs, Downstairs". From the first floor you could walk through various rooms towards the rear of the house and come out at the level of the garden. There were many rooms. Some of the staff with an early start in the bakehouse needed to live in. A large extension had been built from the rear of the original house in the area of what was known as the yard. Inside the yard we had a big black working water pump that was used to wash down the flat flag stones laid in the yard. From the yard there were steps beside the bakehouse up to the rising garden.
One Saturday morning in June 1943 Mr Holton had baked his first batch of bread at the beginning of another early day. After 4 hours in a hot bakehouse he began to cycle home for his usual breakfast and suddenly started to feel very ill.  With great difficulty he got home to his wife in time to sit down in his chair and passed away. He was a few months away from 70 years old, born in 1873. He was committed to his job and an active member of the Cumnock Gospel Mission Hall. His burial took place at Bath.
Without him Real & Holton continued. In 1946 my great uncle retired early at the age of 60, passing the business on to his nephew, my father Mr William Tom Sparkes. My father had been demobilised in the March of that year from the Royal Air Force. He was born in Shaftesbury, Dorset in 1914 and grew up in Beer, Devon. We, my mother and younger brother Graham, had been living in Fore Street since the summer of 1944. My aunty and uncle moved out and bought a detached house in Station Road near the rear of Squibb’s Garage.  Soon after, Miss Peggy Dare who had worked in the bakehouse for many years followed Mr and Mrs Real to Station Road and lived in as their paid housekeeper. In 1947 King George VI and Queen Elizabeth, announced their daughter’s engagement to Philip Mountbatten, formerly Prince Philip of Greece.  Real and Holton supplied a wedding cake to Princess Elizabeth (Elizabeth II). This cake was made in the Fore Street Bakery of Castle Cary and delivered to Buckingham Palace. I, Kay, have written a small book about it.  The book is titled "ROYAL ICING ON THE CAKE”.
In the early 1950s the marble fireplace was removed from the front room as my mother disliked it and wanted something modern. When the fireplace was dismantled my father didn’t know what to do with all the marble, so he got our gardener Mr Loveday who lived in Florida Street to dig a big hole in the garden. This beautiful fireplace is now buried in the garden. My dear Aunty Clara, who had been proud and fond of this wonderful fireplace, was horrified at my father’s decision. My father expanded the business in Fore Street from the existing shop cafe and bakehouse, adding a snack bar, restaurant, office, and an extra kitchen. He dropped the name “Real and Holton” in the late 1940s, and renamed the business "Sparkes of Cary". He later had two cake shops, one at Shepton Mallet and the other at Bruton. He used the local Roundhouse as his trade mark. He was the first businessman in Castle Cary to use this image as a trade mark. The Roundhouse was built as a prison in 1779, with a distinctive roof similar in shape to a policeman's helmet and can be seem at the top of Bailey Hill, behind the Market House. Part of the bakehouse can still be seen from the cart passage of Fore Street, but no longer used as a bakehouse. The main ground floor premise is now a Co-operative supermarket and the upstairs accommodation has been turned into flats. Mr Real lived his last days in Seaton Devon, with his wife Clara, and died at the age of 85 in 1970. Mr Sparkes also lived his last days in Seaton Devon and died age 72 in 1988. Both men died at Axminister Hospital, Devon. 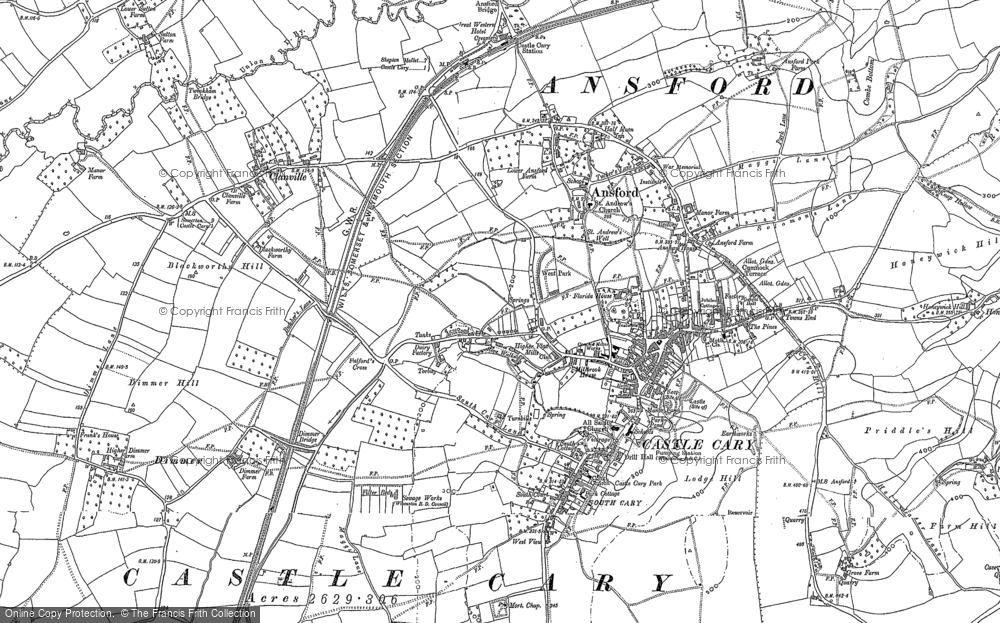