Morris Dancing With The Clitheroe Morris Men - a Memory of Clitheroe.

This was a weekend to remember!

The Clitheroe Morris Men invited several other dance "sides" to join them for a weekend of dancing, music and - of course - beer drinking! By a lucky chance I was included in this invitation due to a strange set of circumstances...

Just the Autumn before, in 1979, I had begun to play my piano accordian for the Whitethorn Morris team in Harrow, Middlesex. After a month or two of enjoyable music I spotted an advertisement in the Watford Observer which said that the Pumphouse Women's Clog Morris urgently needed a musician to play for their practice evenings on Monday nights. Well, I lived in Watford, and I badly needed the extra opportunities to practise playing for dancing on my accordian myself. So I got in touch and found myself twice as busy: Mondays nights playing in Watford for the Pump House Clog Morris and Thursday nights playing in Harrow for Whitethorn Morris. This worked well and my standard of playing improved immensely. In fact in next to no time the lovely women in the Pump House Clog Morris team decided they, and I, were good enough to dance out in public with other morris sides. And so what happened next was a trip to Clitheroe for a weekend of dancing, music and beer along with their friends from the other Watford morris dancers - Woodside Morris.

We set off on Friday night in a minibus and may have had a few beers on the way! Saturday passed in a blur of lovely pubs - the names Swan and Royal, White Lion and New Inn spring to mind. We processed from one pub to another by dancing down the streets striking sparks on the cobbles from the steels underneath our clogs. We danced by the Castle gardens and also admired the bridge over the river and of course as the day wore on we became more and more merry!

I think I stayed the night in one of the local dancer's homes as did all of us visitors from Watford. The hospitality was excellent and needless to say Sunday was a similar orgy of dance, music and beer followed by a long drive home down the M6 and M1. Somewhere I have some photos of this lovely weekend showing us dancing in the streets outside the pubs and ignoring the northern damp weather! Altogether it was a pretty good weekend and maybe if the Clitheroe Morris Men ever get themselves organized again I may have an opportunity to play my piano accordian there once more. 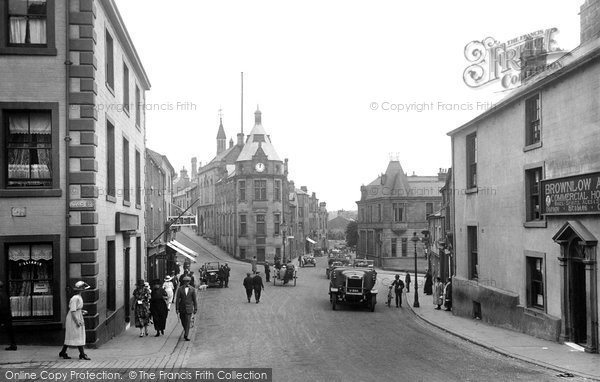