My Years Growing Up In Clovelly - a Memory of Clovelly.

My name is Sam Burrow I was born in Hartland in 1936 - the family moved to Clovelly in 1939 and lived in Home Lodge. My father, J A Burrow, was the estate foreman. My mother, Florrie, was the school cook throughout the war years preparing meals for not only village children but also the many who had been evacuated from London and Plymouth. After the war she managed the tea rooms at the car park for the estate company. There were four brothers John, Bill, Sam & David. Upon leaving school we each left Clovelly for different occupations. I moved to St Albans in 1951 and now live in Nottinghamshire. I love to visit Clovelly to retrace the happy memories of a childhood growing up with total freedom of being able to play on the boats, in the woods, and in particular the beach at Mouth Mill - 'happy days'. Mrs Asquith was the resident owner of Clovelly. I clearly remember the Xmas when a fire destroyed a large part of the Court which was being used as a convalescent home. In particular I remember the winter of 1947 when it snowed so much that it was level with the hedge tops up Slerra Hill and nothing moved in or out of Clovelly for many days. The Rev Chandler and his family were our neigbours across at the Rectory. Mr Hesketh was the headmaster assisted by Barbara Cruse, Mrs Fisher and many others - all crammed into Wrinkleberry College.

The Mullbury harbour and the warships that anchored in the bay sounding sunset.

Running to the lifeboat station whenever the rocket went off and staying until all hours awaiting its return.

Walking the beach from Bucks Mills to Mouth Mill - beach combing for anything washed off ships - many interesting finds were made.

Its been 61 years since I last lived in Clovelly but its nice to be able to visit and be recognised still by John Glover & Barry Perham who seem to have forever been part of the unchanging tapestry that makes Clovelly.

The 1960 picture of the High St shows Cecil Braund and his donkeys outside the post office. 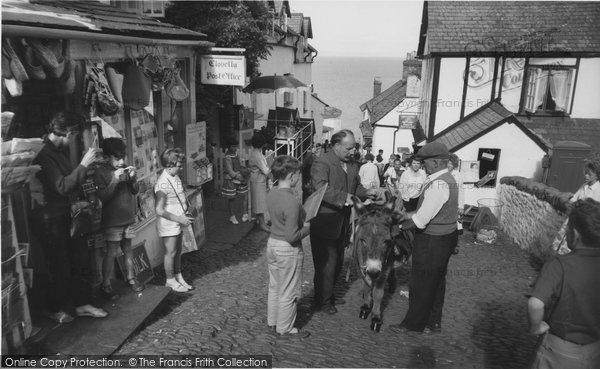