We have been advised by Royal Mail & Parcelforce that their collection and delivery services will be disrupted by industrial action on the following dates: Friday 9th December 2022 so this may affect the delivery of some orders.

Crichel House During The War Years

A Memory of Crichel Ho.

Dumpton House (Preparatory) School was evacuated to Crichel during the Second World War from Broadstairs in Kent. My older brother (Paul Cremer) was already at the school and due to the war my parents sent me (Jonathan Cremer) to the school at Crichel House in May 1940 when I was only seven years old.

I loved Crichel. Everything about it seemed magical to me as a 7-year-old - the house itself, the village, the lake with its quaint boathouse and swans' nests, the beautiful cedar trees with their very special smell, the grass tennis court with all the sweet smelling camomile flowers on the grassy banks surrounding it, the crystal-clear stream with all its wonderful watercress, the dining hall with its enormous chandelier, the wonderful portico where we did PE, the beautiful Italian Garden so good for relay races, the unbelievably squalid 'ink room' in the basement, the fantastically beautiful and elaborately decorated lavatories with seats 4-feet wide, the majestically long gallery on the top floor, the sumptuously red-carpeted and wonderfully wide spiral staircase, the lovely weeping birch tree beside the croquet lawn, the lovely rural walks and last but most certainly not least the whole area which was alive with butterflies of almost every variety... White Admirals, various Hairstreaks, Silver-Washed, Pearl-Bordered and Dark Green Fritillaries, even a High Brown Fritillary and a Small Copper.

Living at Crichel House was like living in a dream. It even had a strictly out-of-bounds 'Egyptian Room' where surely we thought there must be a ghost.

At home I had a nanny and she was sent with my younger sister (Waveney Brooks) to stay with Mr & Mrs Jolly in Moor Crichel, then later she moved to Higher Farm in Long Crichel. Close to Mrs Jolly's home were the stables run by Mrs Outhwaite, and in another corner of the stable block was the home of Mr Miller the butler. Then down the side of the stable block was a long room which the school used as a .22 rifle range. I have vague but pleasant memories of Mrs Jolly's house (she had a large poodle called Pierrot - what a strange thing to remember!) as being at one end of a semi-circle of houses which centred on a well. And it always seemed to me that it must be just like the well described in the Book of Genesis where Jacob watered the sheep for his future wife Rachel.

One of my fond memories is of the weekly choir practice in the Crichel House Chapel with the local organist whose name was Mr Gilbert. I always especially looked forward to the one Sunday in each month when we sang the 'Benedicite, Omnia Opera' starting "O all ye works of the Lord, bless ye the Lord: praise Him and magnify Him for ever". I remember that I particularly liked singing the verse "O ye Whales, and all that move in the Waters, bless ye the Lord: praise Him and magnify Him for ever" and it was that verse which narrowly took precedence over the next verse which was almost as good because in the next one it was "O all ye Fowls of the Air" who got roped in for a praise session. I used to wonder what it would sound like with all the Whales and Fowls of the Air praising the Lord and I always wished we would be allowed to sing it twice per month rather than only once!!

I seem to remember a very unusual lady who lived within the private wing of Crichel House whilst the school occupied the main part of it. She was unusual insofar as she had a black patch over one eye. I think her name was Miss Cotton-Stapleton or something closely resembling it. Then I believe there was a Lady Anna Sturt who also lived in the private wing of the house, but i do not remember ever seeing her.

In the Crichel Estate workshops there was a very kindly and patient carpenter whose name I never saw written, but it sounded like Mr Jye or perhaps it was Gye, I just don't know. All I know was that he was a very very nice man. Thanks Mr Gye (?) for being so patient with and kind to a boy lacking any skill in carpentry.

Another local gentleman I remember from those many years ago was a not very tall man. He owned the garage near the Witchampton Post Office. His name was Mr Biles (not sure of the spelling) whom we rudely called 'Bilious Biles'! He was so short that it seemed he could scarcely see over the dashboard of his large taxi. He once drove a group of us boys all the way back from Dorset to Kent at the end of term - no mean feat during those war days. Thanks Mr Biles, you did a great job there, and I'm sorry I spoke rudely of you.

Yes those were very happy days for a young boy. Living in Crichel House we seemed a million miles from the war - until suddenly one Saturday morning in December 1941 when I was called out of class to be told that the ship H.M.S. 'Prince of Wales' [my eldest brother, David, was serving in as a Midshipman in the Royal Navy] had been sunk off Singapore by Japanese torpedo bombers. Fortunately my brother survived that ordeal.

I think that perhaps the school moved from Crichel House just before the end of the war - we had to relocate to Gaunts House near Wimborne. I never knew whether the owner (Lord Alington) asked the school to move or whether the School thought it had found a better place.
From the point of view of this particular boy nothing ever could have been better than Crichel House.

This memory is written about Crichel House, 1904 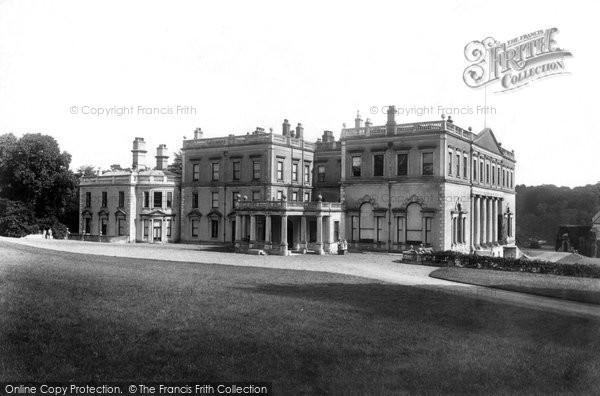 My mother, then Sheila Harris lived in Long Crichel from the age of 4, in 1927, until a few years after WWII. She often recalled working for a short while at Crichel House during the early part of the War (until she joined the WAAF), helping to 'bath the little boys' as she used to say. She remembered them as evacuees from a Prep school, but could never remember its name. Now we know! Thank you. Pauline Rowley
By plrowley on Wed Jun 29th 2016, at 5:19 pm
Contact User
Report
Hello Pauline, I'm glad to hear that my "Memories of a 7-year-old' at Crichel House were able to supply that little bit of missing information from your mother's memories - - - - ha ha! I suppose it is even possible that I was one of the many little boys she bathed while she was working there. One thing is for sure though, she would not recognise this 83-year-old (with a beard and walking with the aid of 2 sticks) as one of the children she bathed during the war !!