As I remember the Almshouse have stood on the corner of George St and North End .Wilsons coffee shops were in North End and George St-also in Purley
The photo of Surrey St in 1955 might show a stall selling gramoohone records ran by a rosy cheeked lady.
I went to South Croydon Secondary Modern school from 1956-60 and still have some photos including school trip to Interlaken in 1959.
If you are out there Bernard Corby, I would like to hear from you

A memory shared by rogerpage0 on Feb 11th, 2020. Send rogerpage0 a message

Wed Sep 8th 2021, at 6:06 am
Robert Germaney commented:
I used to love the smell of the coffee roasting,my first job when I left school at 15 was working at Wilsons bakery on Drumand road in-between Kennard's and Lyons coffee shop. I remember days were long , 7 am till 5 pm and 1 hour for lunch, and half day Saturday, then when I turned 18 I went to work at Sainsburys at the South Croydon working as a butcher, used to live up the hill in Sanderstead where I lived behind the fire ststion
Add your comment
Report abuse
Sun Feb 16th 2020, at 9:02 pm
Marilyn Aylott commented:
Yes I remember Wilson’s as well, I was bought up in Croydon between about 1953 ( I was 7) till 1964 ( 18) I went to Kingsley primary school and then to Lanfranc Sec Mod. Loved going to the rec in Mitchum rd would take a bottle of lemonade and some penny sweets from Gilliam’s corner shop. My best friend was Bonny Hughes and my first boyfriend was David Tomblinson, ha! .my sister Jackie and I lived in Croydon Grove on the corner, our mum worked in Kennards Arcade on the handbag repairs, we were always hanging around there, lunch times mum would sometimes go to the Dog and Bull in Surrey St, my first sat job was on the perfume counter in the arcade phew! Did it smell.... I then got a lovely job working in Rothwells the jewellery shop opposite British Home Stores, I was given the job of cleaning the jewellery with Salvalatery.strong smelling stuff, I’d go to Saturday morning pics in Broad green ABC ..loved it, used to show off by walking along the front just to get seen ha! . I also used to play truant from school and go to the club in town where I met my most famous boy friend Jeff Beck ) he played with a group called the del tones , he used to play Shakin all over for me on his electric guitar....he lived in Wallington and I can still remember going round and bleaching his hair...ha! Lost touch then he got famous. Maybe someone else can remember some of my things I remember too. Hopefully, il see if I get a response , then maybe write some more.
Add your comment
Report abuse 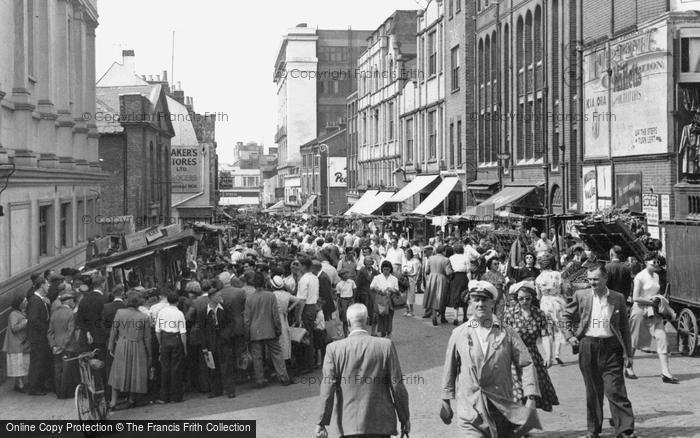