The Cross - a Memory of Eastry.

Most of the names state the obvious. This is an important crossroad. Turn right to go to Mill Green along Mill Lane. Turn left to go to Vye's Stores (pre-1960) and then to the Church in Church Lane or down Brook Lane, where we assume the Brook never ran dry. We also assume that Eastry was much closer to the sea 1500 years ago. There is a view from the church of a vast flat area which we imagine has seen the sea recede. In the distance the road goes to Dover and this is the Roman Road which goes straight through the village. The watering holes are the Plough to the right, the Five Bells on the Cross and the Bull behind us. In front of us is a magnificent sort of Tudor style shop/house which we knew as Haddin's. Once, when we had a village fair we had to guess how many sweeties were in a huge jar in the shop window. To the left is the Chemist's where we hardly ever went unless ill of course and where we used to get our photos very professioanlly developed. This area is still where people get on and off buses to the north or south or east. Long ago the famous and very solid horse trough was where horses were tethered while farmers did their business or had a drink. Perhaps the market place was here. Nowadays, in 1965 the garage was on the right hand corner and a different mode of transport. Behind us is the High Street and across the road was Joe's Cafe. He said he wasn't Jewish but he wasn't from around here. He also had a Rover as a taxi. Oh, in 1960, we all wanted a Rover one day! 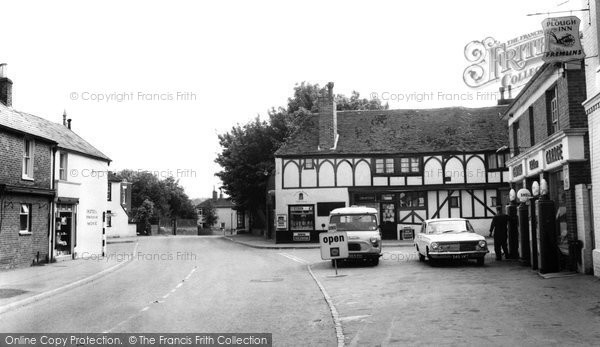