I was born at 117 Bury Road in 1930. Soon after we moved a liitle further along the road to 388 Whalley Road just past the Duckworth Arms. Our neighbours were Mrs Bretherton and children Nellie, Jim and Clifford?. On the other side lived Mrs Mason and son Alfie. We could not have wished for better neighbours and I will never forget their kindness to me during my pre-school years. I attended Sunday school at St John's and was a member of the Church Lads Brigade. Around 1939 I was page boy to the Rose Queen at that time, a Miss Florence Maudsley. I well remember the vicar, Mr Robinson.

I attended Peel Brow school and around that time made friends with two boys who lived within 50 yards of my home, Neville Walls and Roy Beswick. These two and myself became our gang and we spent many happy years growing up together. Neville attended Peel Brow and was about 3 years younger than me. We always went together and many thought we were brothers. Roy attended Edenfield Church
School until moving to Radcliffe Tech.

In our spare time we made full use of the area we lived in, making full use of any suitable piece of land for playing cricket or football on. Cricket was just possible as all we could muster was a batter, bowler and stumper.

During the earlier part of the Second World War, troops were stationed at Cuba Mill, Stubbins, and
carried out training exercises in Edenwood and fields adjoining Sheep Hey Farm. Earlier exercises seemed to involve the use of oil drums to make a smoke screen, a little basic considering the size of the drums involved. Later on we noticed that mortar bombs that gave off smoke were used, these could
be found burnt out but intact and were very collectable!

Later on an assault course was built in Edenwood with the usual tunnels and rope ladders etc. The main hazard on this course was the placing of a Bren Gun just over the fence on Edenwood Road about 50/70 yards from the mill. This was pointed across the brook and fired into a pile of sandbags on the other side. Although I never witnessed this, the idea was for the troops to pass under the bullets as they were fired. When this was in progress Red Flags were placed around the area,these were usually being taken down as we arrived home from school so our first job was to race down to Edenwood in search of spent bullet cases and sometimes a live bullet. The actual bullets could be found in the target
area amongst the sand bags.

Another place in Edenwood quite near to the above firing range was a mystery building we called the cave. When viewed from downstream it seemed to be built from solid rock. On the outside were 2? windows and a doorway looking down the brook towards Rosebank works. Inside was a room about 10 ft square with a fireplace and L shaped stone cupboard. The roof of the cave was overgrown with grass except for the chimney outlet and anyone passing that spot would be unaware of any building nearby. It was never a place we visited very often as the entrance was not that accessible. Local history seems a little vague as to its origins but its use as a Shooting Lodge has been mentioned.

Hope this has brought back a few memories. 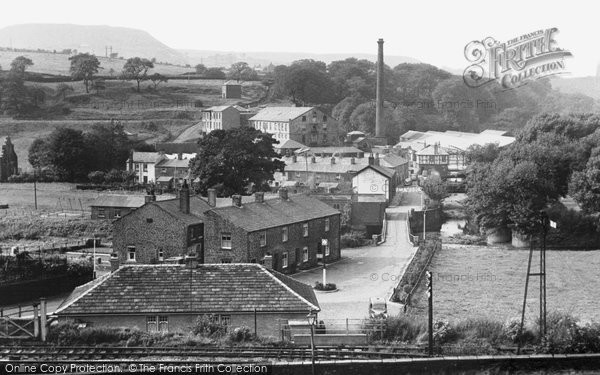