I was 6 mths old when my parents moved into Magna Close, my maiden name being Stenson. 1955 I was born. Well, I have many warming memories of my childhood in Great Abington, some of which relate to the post office. Harry and Hilda Jaggard owned and ran it then, Harry seeing to the post office side of things and Hilda looking after the shop. To this day I still remember the penny arrows, the 2d bars of Cadbury's chocolate, the toffee cushions, winter mixtures, fruit salad and black jacks (I'd love to be able to get 4 for a penny nowadays wouldn't you?), liquourice (comforts, bootlaces, pipes and catherine wheels), all manner of spellbinding goodies and Hilda, bless her heart, she had the patience of a saint as the village children would take what seemed like forever to try and get as many sweets as possible for our 3d or 6d. Treasured memories indeed. The vegetables got tumbled into the vast brass dish of the weighing scales and Hilda would pick up the weights and place on the other end to see if an extra potato was needed to accuire the requested weight. I also remember that if you couldn't find an item that was on the list, Hilda would go down to the cellar to obtain what was required, nothing was too much trouble. Harry Jaggard was equally as nice, he would stand behind his glass window, usually with a cigar for company, attending to the post office needs of the village folk. He would always show unlimited patience with us children as we would offer a small hand under the bottom of the glass so that we could get stamped! We'd be thrilled to bits with our very own post mark, that was of course until he would tell us that we were being sent to London! Harry and Hilda had two daughters, Helen and Jackie, and a huge Airedale called Trigger, he was rather frightening. The photo of the post office is as I remember it (until it was re-arranged some time later) as a child. I remember very well the amount of times that huge lorries would mount the pavement and knock the corner of the building above the door, resulting in repairs quite freqently. In those days the A604 was the main road and was incredibly busy and I'm sure there are many former pupils of the school that will remember the incident of the Turners refrigerated lorry that ended up in the front playground, we, as children of course thought this was exciting! As a result, crash barriers were placed outside of the school. However, with regard to another memory of the post office, there used to be a machine on the outer wall which one could purchase either cigarettes or chocolate outside of opening hours, well, the cigarettes had the relevant change inside the outer wrapping, of course we didn't want the cigarettes, but we would push our small hands up inside the machine and obtain the boxes to get the money (little devils). The chocolate was just a bonus. Well, I've really enjoyed my trip down memory lane, I've shared them with you because they are such treasured memories and I do hope you enjoy just one or two of my memories as much as I have in sharing them with you. Maybe I'll be in touch again to share some more but for now, goodbye. Chris Cooper

Mon Dec 31st 2018, at 9:16 pm
jhnstrt1 commented:
Thank you Frank, I've forwarded your interesting comments to Geoffrey. We didn't have a puppy but Mirzl herself when she was quite old. She was a lovely pet for us children.

Add your comment
Report abuse
Tue Oct 16th 2018, at 6:52 pm
frankbolton1 commented:
Just read the posts ,bought back loads of memories of the past and time at Abington school thanks for that John .I was there when your brother Geoffrey was there he was the fastest runner in our class no body could catch him .The head was Mr Faulkner we called him froggy Faulkner .and yes my mother sold a puppy to you The bitch called Mitzl and Father Bonzo were the breeding dogs and my best friends ,I see my sister has also posted a message on here so glad I was browsing .
Francis Bolton
Add your comment
Report abuse
Sun May 1st 2016, at 4:30 pm
jhnstrt1 commented:
I started at Great Abington school in 1948 and have read Christine and Anne's comments with nostalgic delight. Brother Geoffrey started there in 1952 and sister Susanne in 1959, and I'm sure they'll be equally interested. We lived in Hildersham. I'd love to hear more. My family acquired a boxer bitch (named Panfield Mirzl) from the Bolton family at, I think, the petrol station in Little Abington.

Add your comment
Report abuse
Fri Feb 27th 2015, at 7:37 pm
annehowes1 commented:
Have enjoyed your Post Office Memories. I lived in Hildersham from the age of one year old. We moved to Little Abington when I was 5. I attended Great Abington school from 5 years old until the age of eleven when we moved to Yorkshire. I knew Harry,Hilda,Helen and Jackie. Jackie was one of my best friends. Harry and Hilda were always welcoming. I also found Trigger scary. My mum bred Boxers and they were good natured.
I really enjoyed your writing. You brought back some wonderful memories. Anne Howes maiden name Bolton 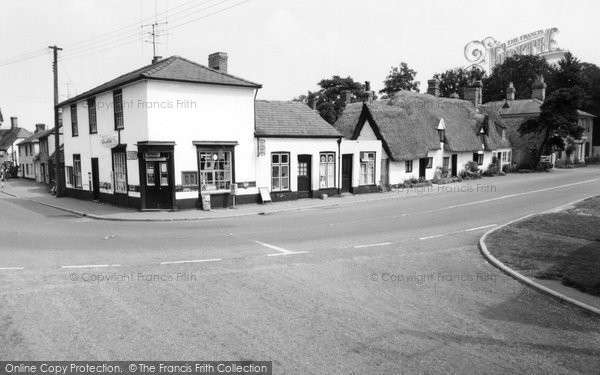