Helsby Bi Sports Ground In The 1960s - a Memory of Helsby.

Now here's a place with some very happy memories. Beyond the field with the cows in was the BICC cricket ground (factory chimney in the background) - if you look closely the white building to the right of the picture was (and still is) the club, bar and changing rooms. To the left in the middle of the picture you can see the white sightscreens used by the cricketers in the summer. To the left of the field, out of shot, was the BICC football pitch. As kids growing up in the '60s the edge of the cricket pitch was a great spot to have a game of cricket with your mates and as the BICC always kept the pitch well mown 4 or 5 of us would often play an imaginary test match against Australia on a summer's evening. There was only one problem and that was a man who I believe was called Syd Thornton. Syd was a cheery enough bloke but he worked for BICC and took great delight in chasing us kids off the sports ground premises. We were doing no harm, not vandalising anything, just playing cricket. But no, he had to chase us off the field just as we were about to beat Australia for the Ashes! Another memory was about a lad called Steven Spencer - he was 9 or 10 like ourselves but he was not a great player of fast bowling. For my age and size I was quite a fast bowler and when we were playing with a proper hard cricket ball he did not like my bowling as we had no cricket pads and if you got hit by the ball it hurt! Anyway, his Dad heard about this and decided to give me some of my own medicine by coming down and joining in the game with us kids. When it was my turn to bat he bowled me some fast real missiles which had me ducking and diving all over the place - just getting his own back for Steven I guess! Sadly some time in the 80's (I think) they concreted over the cricket ground and built a massive warehouse on top of it. What a shame!

Another memory is about the field with the cows on - every year in the 60's H.J. Wallis's Fun Fair used to come for a week in the summer. This was an exciting experience for us kids and to see the Wallis' orange Scammel tractor lorries pulling the fair trucks onto the field was the highlight of the year. We always got told to clear off by the fair men but watching them build the Waltzer and Dodgems was something we had to see. It wasn't a big fair - just the 2 main rides and maybe a dozen small stalls - but the romance of the travelling fair was magical. The Waltzer always made me sick but I still remember spinning round on it to the latest hit from Cliff Richard or the Hollies. It also was the reason why I made my first visit to hospital - one year, I was probably 11, we went down to the fair while the Waltzer was still under construction and the fair ground men weren't around, so it was all quiet. Don't ask me why but we went under the waltzer to see how it was built. So we were scrabbling round on the ground under the steel beams and timber blocks supporting it when one of my mates shouted that the men were coming back. In the rush to get out from underneath it I banged my head on one of the steel beams and was surprised to see my beige coloured jacket turning red not long after - I'd cut my head wide open, blood was pouring out and hadn't realised it. I was in hospital in Chester within the hour and 20 stitches later had a lovely white butterfly bandage in the middle of the top of my head which had to remain in place for a week while the cut healed. Needless to say I was the laughing stock of the First Form at Helsby Grammer for the following week - humiliating doesn't come in to it! 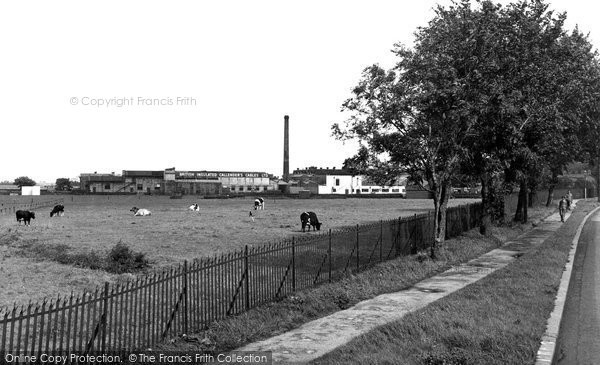