I have vivid memories of the shops shown in the photograph. The shop on its own, on the right of the picture was Galley's Newsagents run by brothers Roy and Dennis Galley. Having said that Dennis' wife used to serve in the shop and was my favourite person as (I was 9 in 1960) if you smiled at her and ordered 2oz of sweets you could guarantee she would give you 4oz at no extra charge! The shop immediately across the alley from Galley's was the Co-op Butchers and next to that was the Co-op General Stores. The lads working in the Co-op Butchers were always out to pull your leg and I remember going into the shop (as a Cub Scout during Bob-a-Job week) to buy some sausages for a neighbour in Rydal Grove. Anyway I must have been 9 or 10 at the time and they thought they would have a laugh at my expense. I asked for the sausages to be told.. "none in at the moment son ... hang around for a while and they'll be in later!" Anyway, I did hang around by the front door for what seemed an eternity (probably an hour or two) until one of them shouted from behind the counter "You still here! .. .try next door in the General Store.. they sell sausages too you know!" ... and they did of course... what a mug! I learnt a little bit about human nature that day!
From 1963 - 1970 I was a paper boy at Galleys with an evening round of about 40 papers and between 1968 - 1970 a morning round of 30 papers as well. Unbelievable, when I look back because for the evening round, which I did 5 nights a week, in all weathers, I got the princely sum of 5 shillings (which is 25p in today's money) a week! And finally, in 1970, when I went off to uni after 7 years of dedicated service I'll never forget getting a 'final tip' of 2 shillings (yes, that's 10p!) for all my hard work over that time! Having said that you could buy a Mars Bar for 5p ... so times have changed. In the 1960's the BICC factory across the way from the shops (to the left in the photo) was the major local employer in the area and thousands worked there at the time. Galley's was always busy and people were in and out all day long. On a Saturday afternoon and Sunday it was like the village closed down in the area around the factory - there was no one around and it was like a ghost town. In the last 20-30 years, with the factory closing, the site being redeveloped and a largish Tesco built on part of the cleared site these shops fell on difficult times . In recent years Galleys has been converted into a private residence and the butchers and general stores, which were a local neighbourhood store for a while, became a bed showroom (2013).

Thu Aug 25th 2016, at 12:43 pm
kathy.shaw commented:
I remember this photo / postcard
as the people walking by the Co-op are my Dad Peter Hughes Grandad Arthur Lomax and grandmother - Maggie Lomax
Add your comment
Report abuse 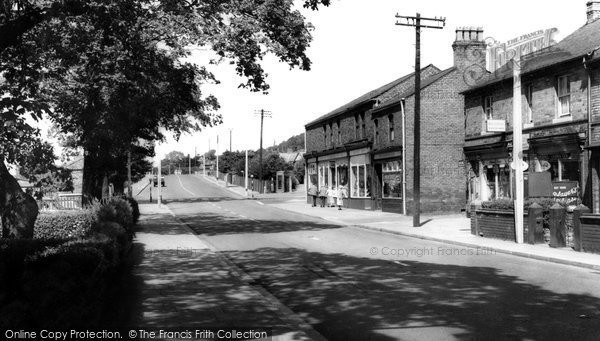