The history of Inverness and specially selected photographs

Inverness is a Gaelic word meaning 'mouth of the River Ness'. The city is situated at the northern end of the Great Glen, a steep, flat-bottomed rift valley, or glaciated trench, which runs for 60 miles from Loch Linnhe at Fort William in the west to where the River Ness flows into the Moray Firth. Much of the land on which today's city is built would have been bog-land on the flood plain of the River Ness and prone to regular flooding. The first settlements were on more elevated ground to the west and east, and on the edges of the flood plain between Loch Ness and the Beauly Firth.

The first farmers, Neolithic people with stone and flint implements, arrived in northern Scotland about 3500 BC; their standing stones and chambered cairns (tombs) can still be seen, especially at Clava, just outside Inverness. Here, situated in shadowy woods, there is a fine group of chambered cairns which are amongst the finest Neolithic monuments anywhere in Scotland. The site is now in the care of Historic Scotland.

Overlooking Inverness from the west is Craig Phadrig ('Peter's Rock'), an Iron Age hill-fort and settlement which was occupied from around 350 BC and again in the 6th and 7th centuries. Archaeological discoveries and historical research over the past twenty years have cast a little more light onto the Dark Ages, the period from the disintegration of the Roman Empire in the early 5th century AD to the emergence of Anglo-Norman influence in the 11th century. To this day very little is known about the original occupants of Craig Phadrig, although excavations by the Inverness Field Club in 1971 produced evidence of re-occupation in Pictish times in the 6th and 7th centuries AD. The most significant archaeological find from this period was a mould used to produce ornamental metalwork; it is the first evidence that such metalwork was produced anywhere in Scotland. Inverness Museum houses an excellent display of Pictish artefacts and stonework.

There is debate amongst Pictish and Dark Age scholars as to whether Craig Phadrig or Castle Urquhart (on Loch Ness) is the fort at which St Columba met King Brude of the Picts in AD 565. This encounter is mentioned by Adamnan, the ninth abbot of Iona, in his ‘Life of St Columba’, written in the later 7th century. It is said that King Brude refused St Columba entry to the fortress, but when Columba knocked at the castle's gates and they opened of their own accord, Brude was quick to convert to Christianity!

Adamnan's book is also noteworthy for containing the first reference to and eye-witness account of Nessie, the monster said to reside in Loch Ness. According to the story, one of Columba's followers was swimming across the River Ness to fetch a boat from the opposite bank when a monster swam to the surface and, with an almighty roar, sped towards the swimmer. Columba made the sign of the cross and commanded the monster to leave, which it did 'as if dragged away by ropes'. The locals, apparently, were 'impelled by the great power of this miracle, which they had seen with their own eyes, to magnify the God of the Christians.' Sceptics point out that Columba and his followers would have been well aware that river monsters were important in the Pictish world, and it would have been in their interest to be seen to thwart such a heathen beast.

In the 10th century Inverness was the centre of government for the Province of Moray. The best known of the Mormaers, or Rulers, of Moray was Maelbeatha, perhaps better known as Macbeth. Macbeth succeeded to the Scottish throne in 1040 and reigned for 14 years. The debate as to the precise site of Macbeth's stronghold in Inverness will probably never be resolved. There are some who believe it was situated where Auldcastle Road now is, although there has never been any firm evidence to support this. It is more likely it stood on Castle Hill, overlooking the Ness, and that the mound there is at least partly artificial. Macbeth was eventually defeated by Malcolm Canmore and his English allies at Dunsinane in 1054 and was killed at Lumphanan, in Aberdeenshire, in 1057.

During the reign of Malcolm, and about six years after William the Conqueror's invasion of England, Anglo-Norman influence had spread to Scotland. By the time of David I (who reigned from 1124 to 1153), sixth son of Malcolm Canmore's marriage to St Margaret, Anglo-Norman ideas of feudalism, trading burghs, and social organisations were being widely adopted.

Inverness effectively became a Royal Burgh during the reign of David I, and the town itself began to take shape. A new castle was built guarding the river crossing, and a street, now Castle Wynd and Church Street, connected the castle to the parish church and the harbour. Bridge Gait, now Bridge Street, came in from the west and East Gait, now the High Street, came in from the east. The new infrastructure was completed by the road from the south, Over Gait, now Castle Street. All these thoroughfares met to the north of the castle at the Cross, later called the Exchange.

The earliest known medieval charter relating to Inverness was issued during the reign of William the Lion (1165-1214). It granted to burgesses in the Province of Moray the right to limit their financial liability to their own personal debts. Another charter, issued early in William's reign, granted the Church of St Mary to Inverness. The church was situated on St Michael's Mount, the site of the present Old High Church. Given the tendency of the early Roman Church to build new places of worship on sites revered by their predecessors, it is possible that this is also the location of the chapel founded by St Columba. In either case, it is certain that there has been a church on this spot for over a thousand years. The church granted by William survived until 1769 when, owing to its ruinous condition, it was demolished and replaced by the building that stands there today. Further charters during William's reign gave burgesses the right to hold weekly markets, exempted them from paying tolls and, most valuably of all, gave them exclusive rights to trade within the burgh.

It was in the 13th century that the town began to flourish. Many fishermen operated from Inverness, and from this time a small shipbuilding industry was attracting attention around Europe. In 1249 the French baron Hugh de Chastillon, Count of St Paul, came to Inverness to have a ship built to take him to the Crusades. Inverness also developed a busy little port in the Middle Ages. The main exports were timber, wool, fur and hides. In the 1970s, excavations of a 13th-century dwelling in Castle Street produced finds of English pottery imported from Yorkshire.

There had been no building on the west side of the river until the 13th century, when the first bridge across the Ness is recorded. Around this time, the settlement of Baile na Faire (the township of the watch) grew just outside the town boundary; here watchers, or sentries, would look out for signs of danger approaching from west of the Ness. This place is now the Ballifeary district of the city.

The death of Edward I in 1307 gave Robert the Bruce an opportunity to realise his power in Scotland. In order to do this he needed to control the lands of his rivals in the north, the Comyns and their allies. Inverlochy Castle in Lochaber, one of the strongest fortresses at the mouth of the Great Glen, was taken after Bruce made a truce with John Macdougall of Lorn, the Comyn's main ally in that region. The castles at Inverness and Urquhart, by Loch Ness, were taken after a truce was struck with another of Comyn's allies, William Earl of Ross. Inverness Castle was destroyed, a policy frequently adopted by Bruce, as he did not have specialist siege weaponry and did not want to risk the castles being used against him again in the future. There is no record of when a new castle was built, but one existed in 1383, occupied on behalf of Robert II.

The size of the burgh increased again in 1369 when the lands of Drakies, along with its fishings, tolls, mills and petty customs were granted to it in exchange for the annual payment of 80 merks (old Scots currency). Revenue from these lands formed the basis of the Inverness Common Good Fund, which went towards meeting the burgh's obligations and expenses. It was also in 1369 that Inverness was confirmed as a Royal Burgh. From the time of David I the burgesses had paid rent directly to the king, making them his tenants or vassals. From 1369 the burgh paid its rent to the king as a single entity.

It seems that the town never had a stone defensive wall; instead there was a wooden palisade built within a ditch and protected by a ring of small motte castles. The burgesses were responsible for their upkeep and maintenance. The castle built by David I was a wooden motte and bailey construction, and the first stone reinforcements were not built until the early 15th century by Alexander of Mar, the Justiciar of the North.

The Reformation seems to have passed relatively peacefully in Inverness. The castle was under the command of Alexander Gordon in 1562 when entry to it was requested by Mary, Queen of Scots. Gordon, the Earl of Huntly's Lieutenant-Governor, refused her admittance, and Mary was forced to sleep in a house at the north-west end of Bridge Street. With the help of the Mackintoshes and Frasers she captured the castle, and Gordon was hanged. The Earl himself was defeated and killed at the battle of Corrichie soon afterwards. An unfortunate postscript to this story is the demolition, in 1969, of the house in which Mary stayed, although its vaults were incorporated into the council building which took its place.

In 1591 the town was granted a new charter by James VI. The Great (Golden) Charter confirmed all previous charters and defined the properties and privileges of the burgh. Inverness, now a busy port and market town, was also confirmed as the most important burgh in northern Scotland. One of the eight free fairs confirmed in the Great Charter was the Marymas festival (the feast day of Mary), first held on 15 August 1590. It was then held every year until its lapsing in 1850, but it was revived in 1986 and continues to this day. It begins with a horse and carriage procession from the cathedral through the city centre with participants in historical-style costumes. Later the Marymas Queen is crowned in the presence of her four ladies-in-waiting. The fair itself is held in the Northern Meeting Park. 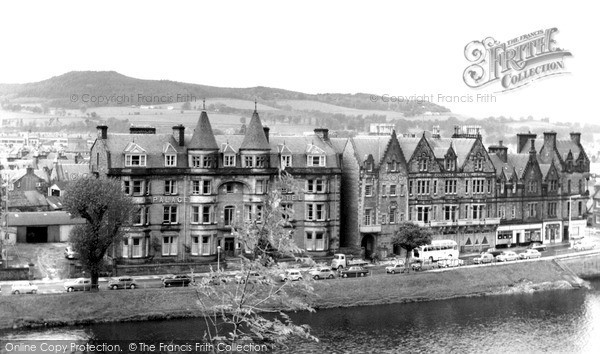 Inverness, the Palace Hotel and the Columba Hotel c1965 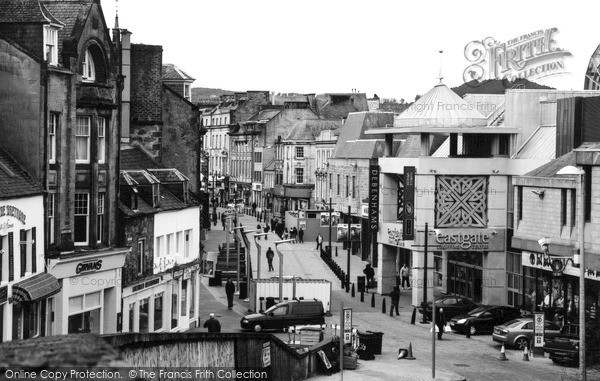 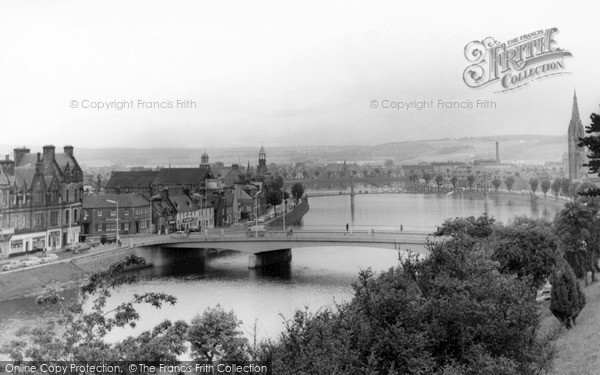 Inverness, the Bridge and the Ness c1965 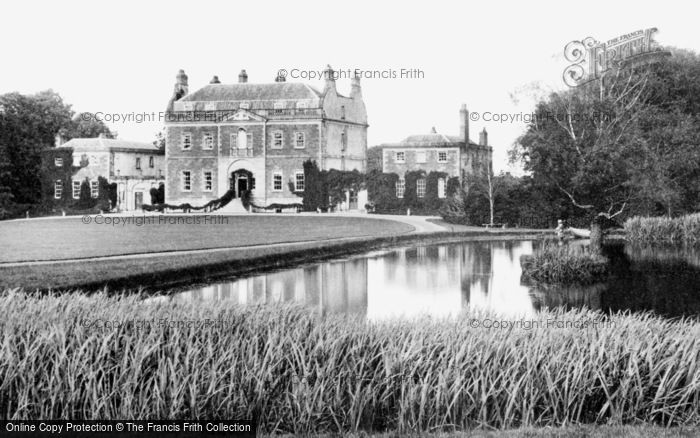 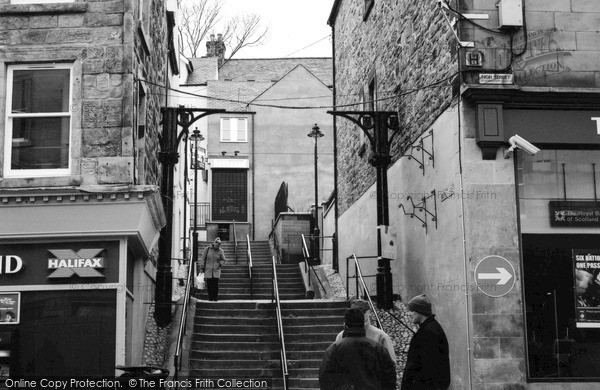 What you are reading here about Inverness are excerpts from our book Inverness - A History and Celebration by Jamie Gaukroger & Clare Maclean, just one of our A History & Celebration books. 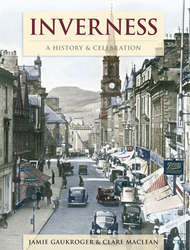