River Side Living - a Memory of Ironbridge.

As a child who was born in 1924 I lived with my family (name of Rogers) just down stream of the bridge I attended the "Blue School"and St.Lukes Church as did all my Brothers and Sisters climbing the 100 or more steps past the chuch to go to school twice a day belting home at midday down the steps three at a time home for something to eat. I would say that we had a happy childhood although we were very poor I remember Rector Roberts and Mr Wragg Headmaster at the school with great affection. Every year we all attended church anniversary all the girls dressed in frilly dresses made by my Mother who was a skilled dressmaker white socks ,black patent shoes,Straw bonnets (can you imagine kids today dressing like this)and in the summer we all entered the Carnival in which we won lots of prizes every year, I still have some of the Photo`s and one of the carnival King and Queen when my Sister and I were on the stage as attendants still dressed in our fancy dress costumes
My Father owned a Punt which is a flat bottomed boat in which he used take us all out on the River, he made small paddles for us and off we would go paddling like idiots up stream towards Buildwas no thought of the danger none of us could swim sometimes we would stop at a little Island that used to be near there ,I don`t know whether it still exists or the floods have washed it away.Remembering the floods living on the river bank was quite exciting at flood time we had to climb over my Auntie`s garden wall and through the gardens of neighbours sometimes through the house belonging to Mr and Mrs Wright in the end cottage, we had great fun then making paper boats set them off at the bottom of the back yard then tear through the house to catch the boats at the front door my Mother going mad with all the wet footsteps trailing through . My Father had a Coracle which he took out on the river sometimes to fish but usually to catch tree trunks and the like which were washed down with the flood water I have seen him showing off, spinning his Coracle round like whirling dervish (mad) because he couldn`t swim either
Summer evenings my Dad would take us for a walk ,more like an assault course,up Bower Yard then on to the old disused Lime kiln works at the bottom of Benthall Edge there we climbed up the old rail tracks which they used to send the lime down to do whatever they had to do to it ,this climb would have been ok as an SAS traing ground .Sometimes we would walk along Benthall Edge and through the fields to get milk from a farm up there we would pass Benthall Hall and the little Church where my Mum and Dad married and where my Grandmother was buried,on the way we would pass the cottage of an old lady we used to call Granny Wale I have recently found out through tracing my family history that in fact we were related to her through marriage She used to come to the garden edge to talk to us wearing long black clothes with a funny hat on her head and smoking a clay pipe
I have lots of memories of my childhood, playing top and whip, bowling a hoop , hopscotc,h making dolls houses out cardboard boxes all kinds of simple things which the children of today would think of as stupid but we were happier then than the bored children of today we didn`t get birthday cards and presents and at Christmas we had a sock with an apple and orange few nuts and sweets if were lucky but on when we got up our front room was like wonderland my Dad and Mum had been up for hours after we had gone to bed(and it was three in a bed then) decorating with chinese lanterns ,baubles which were many years old they were carefully put away each tear,the Christmas tree was made of branches of Firtree which my Father cut up Benthall Edge and decorated with sugar pigs,sugar mice,sugar birdcages and some chocolate fancies on New Years Eve Dad would hang the tree from a hook in the middle of the room and we would dance around it as it stopped spinning we could claim the nearest fancie to us,another treat was when the Gasman called to empty the meter we were given a penny to spend in Miss Roberts` sweet shop at the end of the bridge now this took a long time as there so many sweets I usually chose toffee which Miss Roberts would crack up with a little hammer,she must have had the patience of a saint waiting for us to make up our minds.
All of this may not be of any interest to anyone unless they happened to live in those times and there cannot be many of those left now
By the way the picture of the Ironbridge which you show here is one that my Mother loaned to the Museum many years ago I still have the original photo which was given to my Father by Mr Slater of THe Square Iron bridge 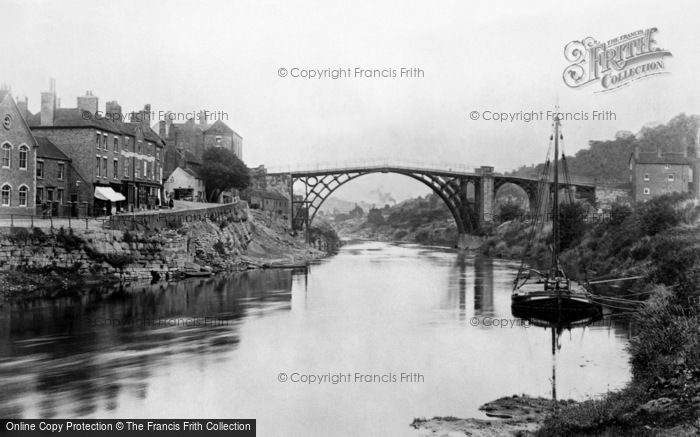 Ironbridge, Bridge from the River Severn 1892