It was indeed interesting reading Roger Barden's account of Lamberhurst, but feel he has left out a few salient points. Of course Curtis the newsagents and Avards the bakers with the ever inquisitive Mrs Avards were selling that delicious bread and sweets for the children going to school. But of course there was just up the hill Gurr's the butcher's complete with pony & trap to deliver his meat together with a very young Peter Sands who went on to have and maintain his own business in the village. Along from Avards, Fred Ashdown briefly had a barber's shop, and next to him was Reeve's the grocers and where the post office is now sat this little lady, whose name I never knew, who sold various materials and balls of wool. Next to that was Avard's Garage, selling petrol at four shillings and seven pence per gallon, and next to that was the Redman garage, which whilst also selling petrol was mainly concerned with the repair of vehicles. Next to that was the sweet shop, namely Fuller-Waters, where we all tried, mainly in vain, to buy our beloved Woodbine cigarettes, or if extremely flush with pennies then perhaps even a packet of Peter Stuyvesant – all the way from America. Across the road was of course the Chequers, which only a few years previous had been given up by the Beech family after one hundred and sixty seven years of tenure, now being run by Frank Pearce. Across the bridge was the George & Dragon; something of a snobbish place, because everyone who went there seemingly had large Rover type cars. Unfortunately, when the school dentist ‘hit town,’ it invariably parked in the George & Dragon car park, and put literal dread into every schoolboy and girl going to school. Next to the George & Dragon was of course the infamous Crown Chemical pharmaceutical manufacturers and distributors, complete with Bill Hayler who seemingly had been with that company since Noah was a kid. Back over the road was once again Avards, but this time it was Avards coaches, and how we used to look forward for an actual ‘day out’ at the seaside. The usual haunt would invariably be Hastings, but occasionally it was Eastbourne, and once as I recall even Margate. (Not many working people had cars in 1960.) A little way up School Hill was Evans the grocers, with whom my father worked as a van driver for many years. Again, there were not supermarkets in these salad days and the local shop really was worth its weight for local people. Then of course the school, complete with Mrs Motram who taught the infants, Miss Price the next age group, then the smack happy Miss Blackford and finally the ever drunk and in my opinion downright vicious Mr Black the headmaster. He really loved swinging that cane, especially after he had completed his ‘liquid lunch’ at the Chequers and had actually decided to return to class.

Suffice to say the village has undergone some serious makeovers since those seemingly far more simple days. We see the lahdy-dah and green welly brigade and of course those that felt a second home in the country was ‘after all desirable.’ No more Mr Farmer making ready for the village fete (as well as being the school caretaker), or Dr Woods taking exceptionally good care of his patients using his own made up (and incredibly bad tasting) medications, but not having to follow the endless red tape of modern times…

It is easy to reminisce at old Lamberhurst and see faces now in the churchyard, and we as scruffy children allowed to run wild and free. Even the local policeman (PC Hollands) gave me a clout around the ear for scrumping strawberries from Fermer’s farm, and threatened me with ‘prison’ if he caught me again. This put the fear of God into me and when I found a half crown right outside the police house (opposite Furnace Avenue) I rushed to his door frantically knocking because as a seven year old child I was convinced PC Holland was ‘setting a trap.’ When Mr. Holland did eventually come to the door and listened patiently to my tail of truth, he beamed a big smile, put his hand in his pocket, pulled out another half crown and gave it to me for being honest. Those acts (the clout for taking strawberries coupled with the policeman giving me the ‘reward’) have put me in good stead ever since.

Tue Apr 10th 2018, at 8:36 am
dianne.bedford commented:
Unable to find Roger Barden's post - Is it on this site as I would love to read as I remember
Roger and his family?? thanks in advance
Dianne Bedford 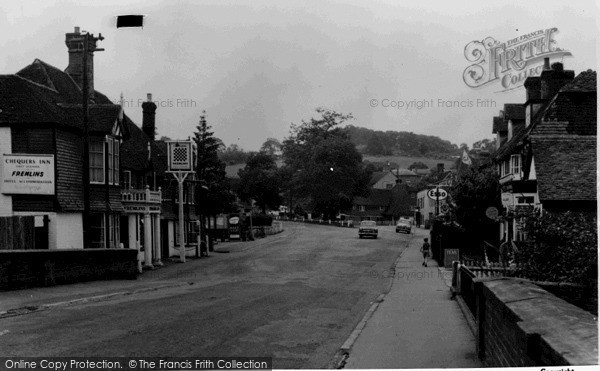 Lamberhurst, the Broadway from the Bridge c1960