My Grandad's Shop - a Memory of Langold.

On the very right of this photo is my grandad's shop. He had his name FV DRABBLE on the front, you can just see part of the name in the photo.
My grandad was Langold's only cobbler. The bottom half of the windows were painted some kind of horrible creamy yellow colour to hide all the machinery etc that was in the area to the right of the door. I have no idea when he first opened up the shop, but I understand that his business started with him making clogs for the miners. I remember helping him in the shop on many an occasion when I was in my early teens. My grandad and grandma lived in Carlton on the green in a house called Ivy Cottage, that had green iron railings round the front.
My parents moved to Langold from Carlton in 1956 when I was 5 and started at Langold infants school. There were three schools there on School Road then, plus the nursery, which adjoined the infants school. The other side of the fence from the infants school, was the larger building which housed the junior school and senior school. I went to all three schools in Langold, before leaving home at 16 to work away.
We first lived at number 6 Goldthorpe Close - which were those old post war prefab bungalows. When I was 7, we moved further up the road to number 7 Goldthorpe Avenue in one of the Airey houses. Three of my four brothers were born at home in Langold.
As a child growing up in Langold, my dad used to work as the maintenance man at the cotton factory. I used to go and stand by the gate every Friday which was his payday and he would give me 2s 6d pocket money for the week, with which I would go straight to Brothwell's toy shop and buy an Airfix kit for 2s and a tube of glue for 6d.
My mum used to send me to the Co-op store with a £5 note to get a week's shopping. How times have changed. I would also go to either Mr Harrison's or Mr Rigg's butchers shops to get "a nice bit of beef for Sunday dinner".
In those days, the bread man came round in a van delivering to his customers. I remember my mum buying us 'Weston's Wagon Wheels' which were considerably larger than the excuse for Wagon Wheels that are sold now. The fishmonger also came round in a van. Once a week Jimmy Padley would come round in his big blue van which was a mobile shop.
Somewhere between the garage (centre of photo) and the end of that row of shops was a little sweet shop. They used to have a machine outside on the pavement that you could put 6d in and get a bar of Cadbury's Dairy Milk Chocolate.
I also remember, next door to the cinema was Dutton's greengrocers, further to this end and out of the photo was another toy shop and next door, the last shop, was Shakespeare's newsagents. This side of Shakespeare's was the fire station and then the Hill Top Club. The fire station was not permanently manned and if there was a fire call-out, the siren would sound and the part-time firemen would come running or cycling to man to single fire engine which would race off with the bell ringing. Further to this side (south) of the Hill Top Club was the bridge over the railway line that serviced the coal mine. We used to sit on the bridge when the trains were going through and get engulfed in their smoke and steam.
As my brothers and myself all grew up we left home, either for work or, in Paul and Rob's case, to get married. My dad died when I was 13 and my mum brought us up with the help of my grandparents and an aunt and uncle. My mum became very ill with heart and lung problems and moved to a sheltered flat in Worksop, where not very long after, she died in the new Bassetlaw Hospital there.
Now, my niece, my brother Rob's daughter, Laura, lives with her husband and children in the Caretakers Cottage on School Road. The rest of us are scattered all around the country, me and my family in Essex, Charles and his wife in Lincolnshire, Rob and his Wife and son in Lancashire, Paul and his family in Derbyshire and David and his new wife to be in Nottinghamshire. 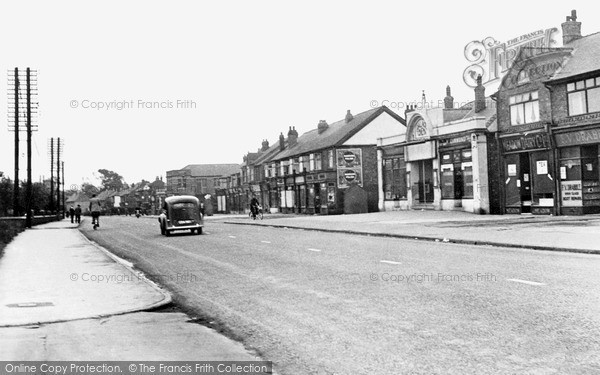