Langstone Memories - a Memory of Langstone.

I grew up in Langstone, living at 'Longleat' on Catsash Road from 1961-1973. I attended Langstone Primary School from 1964-1969 and then Caerleon Comprehensive from 1969-1973. 'Longleat' was one of the four semi-detached houses at the north end of the road and was the third from the end. Running behind the houses was a small stream that originated as a spring in the field north of the house and ended down at the A-48 where it merged into a larger stream running east-west. Prior to us an older couple, Mr & Mrs Coward, lived at Longleat and when they left they moved to a larger house on the south side of the A48 between Taylor’s transport café and the Coldra (there was no roundabout there then). When we arrived at Longleat in 1961, a very old couple, William and Carolyn Edwards lived in the very end house on the north end of the street. Mr Edwards had only one leg and he fascinated me when I’d visit, and he sat resting in his chair with his stump showing. Mrs Edwards used to gather watercress from the stream in the field north of the houses and sell it at the market in Newport. Mr Edwards died in 1963 and Mrs Edwards in 1970, and they are buried in Langstone churchyard. Between the Edwards and our house, Mrs Phyllis James lived. She had lost her husband Henry in 1960, just before we moved in and had two grown up children, Tony and Christine. Tony used to build canoes in her garage and Mrs James loved to garden and tend her rose bushes. Just south of us in the other half of our semi-detached unit lived the Reardon / Palmer family. There was Margaret Reardon, a widow, and her youngest daughter Kathleen, with Kathleen’s husband Arthur and their children Felicity, Faith, Stephen and Jamie. I played a lot with Stephen (who was slightly younger than me) and the twins Felicity and Faith, both about 6 years older than me. They often babysat me. Mr Palmer had an old car (1940’s I would guess) that sat in the garage they had, and Stephen and I would often play in it. It never left the garage and smelled very musty inside. South of the Palmers in the first detached house were the Jerwoods, Dorothy (Pet) and Frank. Frank was an avid gardener and grew some incredible peaches, which I loved eating. The Jerwoods had an Italian family that was somehow associated with them and I was great friends with Gianni, one of the children and we hung out together whenever they came to visit. Just south of the Jerwoods there was a small side street with a few houses and along here lived another Palmer family, Mr Alfred Palmer and his wife. I didn’t realize it at the time, but Mr Alfred Palmer was I think the uncle of Mr Arthur Palmer, and he somehow carried a great deal of weight on the street. When there were meetings to decide business to do with Catsash Road, the meetings often took place at this house. I remember one meeting where I was dragged along by my mother and he talked about the problems with the stream that ran behind the houses down the street, and how we needed a central sewer system rather than the then system of private septic tanks which overflowed into the stream. There was also talk about the growing unexplained problem of periodic flow stoppages in the stream. Little did the residents know that this was caused by my brothers and I building massive dam projects behind our house and thereby mastering the flow of the stream. Problems with the sewage system on the street finally came to a head in the mid-1960’s when several sewers, including ours, started to back up. My dad, together with Frank Jerwood, neither of whom wanted to spend the money to have the council come in and fix the problem, attempted a ‘home-fix’ and one night (to avoid notice by the council) dug out a large portion of the Jerwood’s garden (where the septic tank was located). Feeling that they’d dug out enough to find the root of the problem, they looked out the next morning to find their freshly dug hole a large pond now filled with sewage. Now we understood how the Jerwoods had always been blessed with such an abundant garden. Shortly thereafter the council came in and dug a trench up the entire west side of the road and connected all the houses to a central sewer system. Further down the road and on the opposite side lived the Wills and their market gardening business. Danny Wills and his wife Gladys ran the business which was mainly growing flowers for the market in Newport. I spent many days there working for him in his greenhouses and fields and learned how to drive a tractor. We sometimes went as far away as Chepstow to make deliveries. The Wills had a daughter whose name I forget but I do remember the Triumph Spitfire sports car she drove around. My favorite though, was ‘old Mr Wills’ (Danny’s father Sidney), who was in his 80’s and lived in a house in the north central part of the grounds. He was very generous and always had chocolate bars he gave to us, as well as an old organ in the front room which he let us play. Moving further down the street and back on the west side of the street was another market garden, this one run by the Airdries. They had a son David who was perhaps 6 years older than me. The Airdries had a substantial estate with lots of greenhouses and at the entrance a grove of majestic beech trees; I believe this is where the roundabout is located now.
(to be continued)

Thu May 11th 2017, at 8:38 pm
pjengineeringservices commented:
As is usually the case when my fingers hit a small key pad, I occasionally hit the wrong key, fingers too quick and not quite in harmony with ageing eyes - as just happened !!
I have enjoyed recalling, - where have the years gone eh ? Our perception of time changes with age. When I was a kid an hour (especially in a classroom at Langstone) felt like an eternity, - now in far later years an hour goes with the click of the fingers.
Down the timescale...... Porthcawl is a good place to be.......
More memories will definitely follow.

Add your comment
Report abuse
Thu May 11th 2017, at 8:21 pm
pjengineeringservices commented:
It's surprising what you find when you 'google' a place you knew because of the memories you have and the pleasure they give.
Why Langstone ? I moved there with my parents in 1967 having previously lived at Llanwern village. Both places contributed to having a very happy childhood.
What caught my eye about 'Memories of Langstone'?
Many things, - including the writer, - Michael Davis. I recall going to one of his birthday parties, - mainly because of the rope swing over the stream at the foot of the garden at his Catsash home.
Richard James ? His father was a solicitor (if my memory serves me !)- Llanbedr Hall a lovely big home 'behind the trees' next to the A48. His dad had a Bentley, - AND a ride on lawn mower !! Quite something for circa 1968.
Michael went to Langstone County Primary, - a lovely school, despite the aforementioned 'Gaffa Griffiths'. The highlight for me ? Weekly visits to Maindee baths, firstly 'Maindee Little' (hanging on to the bar and learning to kick) followed by 'Maindy Big' where the better swimmers went in the Fourth year.
Mr Jones was also my favourite teacher, he taught year three in the juniors, his classroom being before Mr Hammonds (last class on the right at the end of the corridor) who taught year 4. Mr Hammond also played piano at school gatherings and services.
What do I remember him playing ? 'Oh bla di oh bla da', sung by Stuart McCabe who was in the year above me, - in Michael Davis' year as I recall. - This was at the end of school year, 1969, and I was 10, - a hall full of children cheering and clapping at the end of Stuart's performance !
The school had two playgrounds, with lovely views over the countryside to the Bristol Channel, and a playing field at the foot of a large green bank. Football at play time was the order of the day. 'Picking teams from a line of boys at the foot of the bank' and away to go, two piles of jumpers forming the goals. Brill !! - untill the bell went for 'end of play time'!
On sports day the parents would sit at the top of the bank on two rows of chairs and watch, - looking out over the view, over the heads of the classes of children who would be sat on the bank below them cheering their team mates on. I wa in 'Tregarn Blue' (to those of you who may read, Chemys Yellow, Llanbedr Red, and Wentwiid Green) Junior boys, '2 laps' and David Davis was in a class of his own, - a 'Welsh Usain Bolt'!! After the first lap he took off ha. - David had lived opposite me at Llanwern Village. I had not wanted to leave Llanwern Village, - lovely times, - but Llangstone was a move up for my parents and so we moved to 'Malvern House', the third house up from the 'New Inn' end of Tregarn Road'. It's garden stretched from the A48 to Tregarn Road. I would walk up Tregarn Rd to the school, but would walk back down it far happier at the end of a school day !
Thank Michael for 'your memories' and for bringing back memories of my own.
My response could possibly be entitled 'Memories of Llanwern and Langstone, - Part 1'
Meanwhile perhaps 'Memories of Langstone Part 3' will follow the 'tone continued' above.

By the way Michael, - if indeed you read this, - I'm pretty sure you came to a birthday party of mine in about 1966 or 1967, served 'bangers and mash' by my Mum and sister. We also played at the park, - and you came back to Llanwern with me on the school bus with Richard James and other friends. Richards mum gave you both a lift home later.
Funny, - the warming effect that memories and pictures in the minds eye can have.
Hoping life has treated you well Michael, - 48 years since my 'long ago memories of you' and life at Langstone. 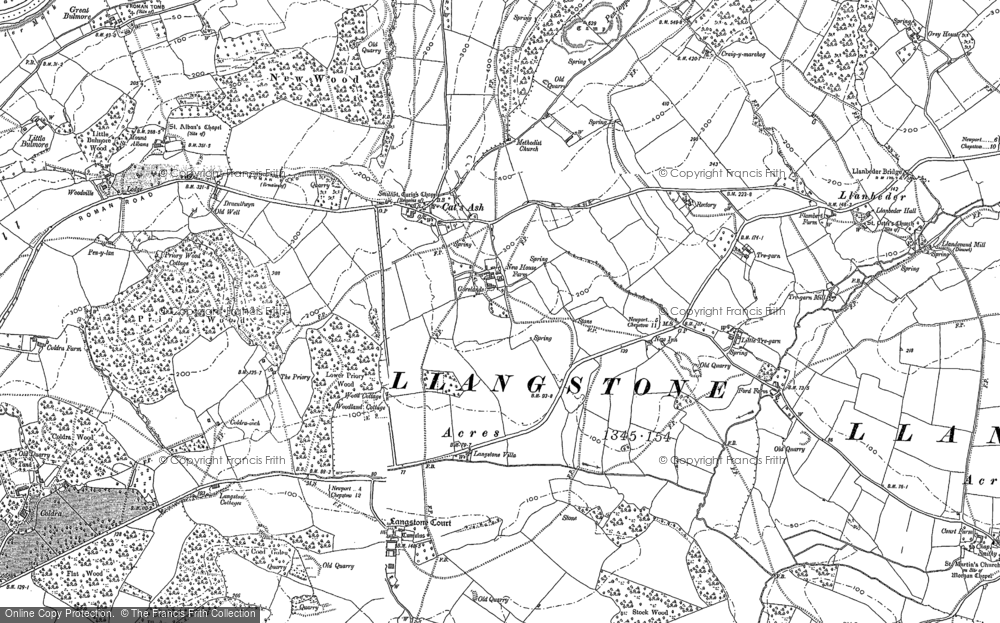