My parents bought the cottage furthest from the camera in the terrace on the left in 1957; at that time I recall Miss Ansell ran the tiny Post Office and County Library combined in the house nearest the camera with the single storey shopfront to its left. Next to that lived the Chinnery sisters, two ladies well advanced in years who had lived in the cottage since they were children. They had no electricity and kept a large, welcoming oil lamp lit in their front window on winter evenings. Between them and us were Mr and Mrs Ash who had moved recently from London. The other side, an overgrown garden stood beside the near derelict former bakery occupied by the Lennies, a couple in their 90's who kept hens, grew vegetables on a plot at the back of the house and seemed almost completely self-sufficient.
Mr Brasted, who sold the house to us, asked my father if he wished to keep the 'Baird Televisor' he had in the front room, otherwise he was happy to arrange to dispose of it. My father refused the set as it was of no use since broadcasts using the Baird mechanical television system had ceased before the war so the thing was of no practical use. In fact it was nearly ten years before we got a TV, but today Baird Televisors fetch thousands of pounds.
The terrace of three houses still stands but the Post Office moved in the late 60's to Boyce's Store which is just visible on the left in the far distance beyond the Lion pub, which was not the Red Lion in those days. Miss Ansell's house was demolished in the 70's to be replaced by large detached houses.
Opposite the terrace were allotments where the Butterfield Estate now stands; building started in 1963 but the homes sold only slowly, some stood half-built for many years. The estate was not finally completed for almost 20 years by which time the window frames had rotted in the incomplete properties and had to replaced, although still coated only in pink primer.
The road had no speed limit in those days and I recall being fascinated at the age of about eight to see a Ford Thames 6cwt van collide with the back of the stationary school coach parked almost opposite the cottages; I think the van driver broke his leg but fortunately no-one else was hurt although the bonnet of the old van was crushed to a triangle shape where he had swerved and struck the back of the coach side-on.
A little further up on the left was Shelford's yard, an old dairy which was used as a second-hand dealers. The ramshackle stables and cart-sheds were full of old furniture, some of which found its way to our house, including my first 'grown-up' iron frame bed and a pine wash stand with an asbestos top bought for use as a toy cupboard! I seem to recall that it cost 4/6d which my mother thought extortionate.
Fifty yards or so beyond Boyce's Store, which became a 'VG Superstore' in the mid 60's an operation later bought out by Spar, was Latchingdon Garage where the now sadly departed Robin Simpson ran a workshop and sold National Benzol petrol at 5/6 a gallon; opposite that was the Bluebell Cafe, a rest stop for lorry drivers and on Summer weekends mods and rockers; the first place I remember seeing a juke box; on that site now is a Shell garage.
Latchingdon was then and still is a place were Londoners move to to be in the countryside but it has gone considerably upmarket from the time when the most prosperous people in the village were those who worked for the CEGB at Bradwell Power Station which opened in 1963; there were not enough homes in the village of Bradwell-on-Sea and workers moved into the new council houses in Lawlinge Road behind the Church. The School opposite the Church was extended from just two classrooms to five to cope with the influx of primary age children also added at this time were a large cloakroom and indoor toilets all with shiny marble-look flooring throughout.
The Street is no longer the racetrack it once was and every last inch of open land has been built on along its length; whenever I go back it seems now to be almost a small town when compared to the village I grew up in.

Sat Aug 18th 2018, at 7:19 pm
Mike Fawcett commented:
Thank you for sharing your memories too. I do remember seeing your father riding his bike about the village.
I'm sure you're right that the name was Shelfer. I had always assumed it was 'Shelford' but I don't think I ever saw the name written-down. They did seem very elderly and I think the sister was called Ivy and was rather eccentric.
I also recall when quite young my mother threatening to take me across the road to see your father for an official Police telling-off if ever I refused to do what I was told!
Add your comment
Report abuse
Fri Aug 17th 2018, at 10:49 pm
jascottbrining commented:
My family moved to Latchingdon when I was about 8 - 1959. My father was the village policeman - PC Bill Lemon. Our house was opposite the Shelford’s (although I thought their name was Shelfer - but I must have misremembered). They were (to me) an old couple and the spinster sister of one of them lived with them. I loved rummaging around their shed and Mrs Shelford often gave me bits of Goss china to take home for my mother. The Baker familes - two brothers - llived next door to us and ran the farm. Rosemary Baker was my age and we played everywhere on the farm together. We performed plays in the stables, mucked out chicken sheds, helped on the hay bailer, washed heifers before shows, collected eggs and helped Mrs Baker make butter. Idyllic times. Thank you for reminding me of gentler times. 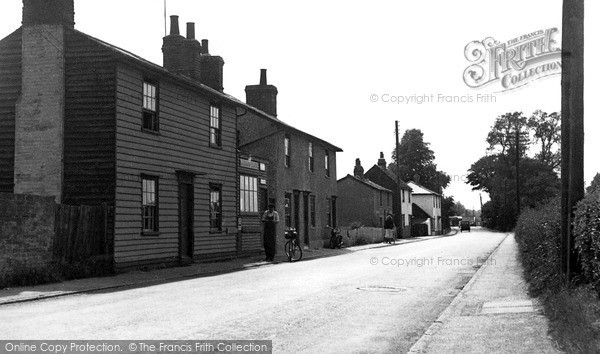