Moulds My Dad's Old Shop - a Memory of Leatherhead.

After the war Dad found work as an assistant in a long established family-run department store called Moulds. Situated in Leatherhead High Street, it was an imposing sort of place with double glass doors set well back from the street and flanked by large curved glass windows displaying everything from three piece suites to sharpening stones. Above the doors on the first floor there was a large arched window where the toy department was located on eye level with passengers on the top deck of passing buses. I remember as a small kid going to the shop to see Dad at work and sitting on a rocking horse in the window looking down into the street as I rocked to and fro. It was pure heaven, or it was, until one day I rocked so hard that I made myself ill and threw up all over the place.

To a small child Moulds was a wonderland. The toy department of course was always a great attraction but I remember finding the hardware and ironmongery areas just as interesting. I would wander about staring in fascination at the tools and implements, cutlery and saucepans, sandpaper and sticky tape - strange sort of kid really. The worrying thing is, I can still do the same today. Now how sad is that?

However, the single most fascinating, and I thought just so modern thing about Moulds (and this really does make me wonder what sort of kid I was) was the cash transfer system. Told you I was odd.

Most people my age will recall how some shops had a centralised cashier’s office connected to various sales departments by a sort of overhead wire system that was used to shoot little shuttles containing money to the cash office which were then returned with change and the receipt.

Moulds had an updated version of this that operated on a twin pneumatic tube system. The cash was popped into a small cylindrical cartridge that was inserted via a sort of spring-loaded gate into the suction side of the system at the point of sale. From here it whizzed around the ceiling clattering like a miniature Bakerloo line to arrive at the cashier from whence it returned in a couple of minutes via the other tube crashing out of the valve into a metal basket.

To me at the time, it was pure science fiction but of course they were actually quite common and remained in use until the 1960’s. After that I guess they perhaps started to trust shop assistants enough to let them use the tills.

The love affair with this old shop started before I went to school because Mum would sometimes take us kids into Leatherhead and leave us with Dad while she went shopping. However, after I started at St Peter’s, I sometimes used to walk into town after school and come home with Dad, perched on the crossbar of his bike.

Actually it was more than a bike – it was a’Cyclemaster’. This was an inventive kind of motor-assisted push bike that had a special rear wheel with a small two stroke petrol engine built into it. It was quite a toy really and whilst it took a lot of the drudge out of pedalling uphill, if you opened it up a bit going downhill it could really fly. Made me crow with delight at the time but thinking back on it now the bike still only had normal cycle brakes so it was probably quite a risky thing to be doing.

Perhaps it was because my uncle Frank was an upholsterer that I also used to enjoy wandering into the upholstery workshop at Moulds. It occupied a corrugated iron shed behind the main shop; in fact it was perched on the edge of an old quarry into which most of the High Street waste seemed to get deposited. The workshop was freezing in winter and the three or four men that worked there used to keep a little pot-bellied cast iron stove burning in the centre of the room. I found my way down there whenever I got the chance.

The big aluminium kettle boiled up quickly on a single gas ring connected by a length of perished pink rubber tube to the gas tap in the wall. A complete health and safety nightmare in today’s terms but it worked fine.

I’d make the tea in a blue china teapot with a spout so chipped it used to pour at an angle of 45 degrees. Then the teapot had to brew.
This meant at least ten minutes simmering on the little stove until it was strong enough to take the skin off your teeth.

“Just the job son.” they’d say and I’d sit there snuggled down into a pile of fabric off-cuts, once again drinking tea with the big boys. The only difference from my experience with the builders was that these chaps didn’t swear or at least not in my hearing.

Sun Jun 4th 2017, at 8:48 pm
Brian Simmons commented:
Hi. Yes you are quite right. I should have remembered the smell. Even today you sometimes get it in the older hardware shops - a very typical and evocative aroma.
Add your comment
Report abuse
Sun Jun 4th 2017, at 3:29 pm
rboychuk7 commented:
What Brian does not mention was the wonderful smell of the hardware dept. This department was situated downstairs and as you went down the stairs the great warm oily/paraffin richness of a smell met you. They had all the things you could want - nails supplied by weight - nothing was pre-packed and they were happy to supply 'I want one of these please' requests. A lovely shop, an adventure to a young lad sent on an errand.
Add your comment
Report abuse 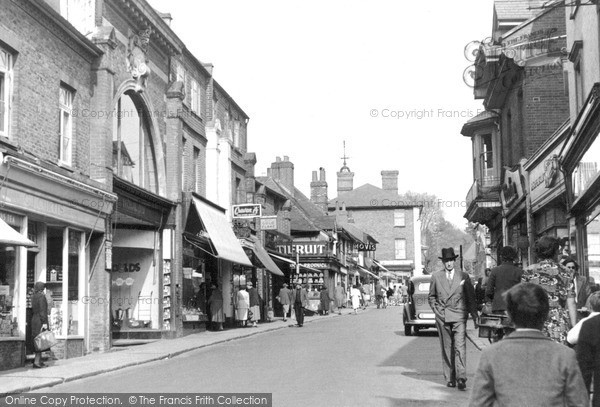