Horror! - a Memory of Limpsfield.

I have very unhappy memories of this school, particularly of Miss Pedly, the matron, and the head of the boys side, My Williams. It was a cold heartless place. Fortunatly my parents removed me after four? terms. A very clear memory is of Williams beating the whole dormitory on their backsides after Pedly had reported us for talking after lights out. Our screams filled the vast forbidding building. Williams ketpt a supply fo his canes behind his study door in a room that smelt of the footballs that he kept on a high shelf down one side of the room. Even looking at the picture of this spooky building sends shivers down my spine!

Sun May 10th 2015, at 12:49 pm
john.foad commented:
We lived at the top of Pollards Hill, and along the road towards Limpsfield was St Michael's. Mostly it was a school for girls, under the formidable Mrs Butler. A few boys, housed quite separately at the far end of the imposing ornamented brick buildings, were looked after by Mr Williams. He gave my mum a grand tour - the chapel, the bell tower, the dormitories, the basement art rooms, the playing fields, and lastly the swimming pool. This was surrounded by a high fence, and the door was locked. Mr Williams searched his pockets for the key. 'Never mind, I can imagine what it's like', said my mum. 'No, no, I must show you' said Mr Williams, and produced a screwdriver from an inner pocket, unscrewed the bolt, and escorted her in. This entirely sold the school to my mum, and Mr Williams could do no wrong for her.
I started in the junior school, Thornhill, in 1944. They read Professor Branestawm to us out of doors in the hot summer, and took us on nature walks through the sandy woods where every oak sapling was hung with tiny lime green caterpillars, each on a long thread. When I moved up the hill to the big school, I loved it all, especially the short walk from home each day.
Three years later, there was a long white winter, bright with deep blue skies. The birches prickled with frost and one morning, melted for a moment and then frozen into clear encasing ice, they gleamed and chimed, acres of trees of glass, glittering in the sun while the air stung the nose and the long lain pillowy snow crunched beneath our boots. Happy Valley became public property then, and Mr Williams took the whole school there in our coats and wellingtons, to toboggan down the steep sides.
By the time I left the senior school in 1948, we had started Euclid, and *, and I think simple simultaneous equations. There was so much time. Even summer afternoons stuck indoors chanting amo, amas, amat, were a thrill. I was boarding by Summer, in preparation for moving away to another school, and there was always time to be out on the grass in the sun, never ending Saturdays and Sundays watching the clouds above the high buildings, and insects in the grass, and I did not grudge the hours spent in the high cool old scruffy class rooms.
On Saturdays we walked in a long line down past Thornhill and the Rugby pitches to Oxted. We browsed all afternoon in Brockes, the stationers-cum-toyshop at the bottom of the hill, opposite the bike shop, and spent our pennies on transfers, or round boxes of caps. On Sunday afternoons we had a 'quiet hour' after lunch, ostensibly to aid digestion, but no doubt really for the benefit of the staff. We sat and read in one of the big class rooms, usually National Geographic magazines, though there was a big book case of classics, and boy's adventure stories. Next door one tune was played week after week in violin practice, a beautiful phrase that I have never been able to identify.
One summer ritual was a joy and a terror. We rolled the cricket pitch with what should have been a horse drawn roller. It had long shafts, and a ton of concrete blocks. A mass of small boys grabbed the shafts, and a mass more scrambled on top to add weight, and off we went. The reason for the terror was that it was back-heavy, and if the shaft boys let go, the top boys crashed to the ground along with the concrete. This happened more than once, but amazingly nobody was killed.
The dormitories were large lofty rooms, cool and airy. The young matron used to read Biggles to us before we slept - it was high summer and the lights were never on. When at last I left, it was the end of the school. Mrs Butler had finally taken over, and it was girls or nothing. By then, we were more senior, only six to our dormitory, and we marked the occasion with a late night expedition down the fire escape to the pool and back. Next morning we were summoned to Mr Williams' room - the French master had seen us and reported us. Mr Williams was if anything rather amused, but discipline had to be seen to be done, and we were given a gentle beating. On the final night, we had a film show, in a blacked out sitting room high up in the tower, where I had never been before, on an old and noisy projector - The Ghost of St Michaels! It was even then an old film, with Will Hays, but I am sure we all believed it had been made for us alone.
The school had a peace about it. It started in 1820 as The Church Missionaries Children's Home, and changed its name to St Michael's during or shortly after the Great War. Some boys' parents still were missionaries, and some stayed there through the holidays because they could not travel to their families. Many lived abroad. 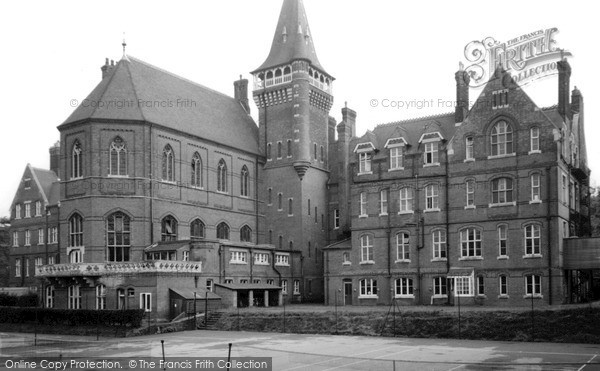