Falling In The Pond - a Memory of Lingfield.

Rod Swift remarked about falling in the pond - well I was one of these. Rod must be my cousin's son, as my aunt and uncle lived in the house referred to. Around 1953 on an icy cold day in winter, a crowd of us were going home after school. On passing the pond we knew there was thick ice so decided to skate on the ice. We did not take into account that it was beginning to thaw and around the outside you could see ice had melted. Quite a number of us went on the ice and most were fine, but I was in the rear and suddenly the ice caved in. I don't remember how many were actually in the water but I was very lucky as a bus inspector waded in and pulled me out from under ther ice. Fortunately no-one was injured, and I only had hurt pride as my mother made me undress outside in the cold. I wish we could have thanked the bus inspector, but we never knew who he was.

With regard to the the old oak tree, I remember many a time standing inside the trunk, and we used to throw knives (holding the blade) to stick in the trunk. Nobody ever came to harm with knives in those days. We were always climbing trees and playing in the fields, making dens anywhere there was cover. We played with fag cards and marbles and five stones (chucks they were called where my mother came from in the north-east, and where we spent most of the summer holidays.)

My sister was fortunate not to be killed by the bomb that landed on Lingfield school on February 9th 1943. A few minutes later and the school would have been filled with 280 children and their teachers. Two teachers and two 11year old girls plus a caretaker were killed which included Mrs Lumsden a teacher, and the wife of Mr Lumsden one of my school teachers. I guess our whole family was lucky as an unexploded bomb was found at the bottom of what was our garden only in 2002 when builders were digging foundations for an extension to a house. It is said that the bombs were for the Monotype factory which was a munitions factory at that time.

My cousin and I used to shop for our grandparents who lived in Plaistow Street, facing the prison which we called the 'Old Cage'. The house can be seen in one of the photos of Lingfield. Grandma used to send us to the local garage to get the accumulator recharged for the radio. We had to be very careful as it was acid. At Christmas all aunts, uncles and cousins visited here for a good old sing-song, while Grandad played the accordion. 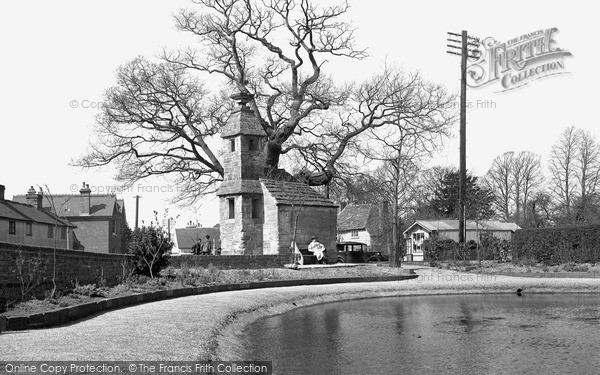 Lingfield, the Old Prison and the Pond c1950