I Might Have Been An Undertaker - a Memory of Linton.

Throughout the first half of the 1950's I would spend every school holiday at Linton, with my maternal grandparents. Initially my mum would accompany me from our home in Trumpington to Drummer Street bus station, where she would place me in the care of the nan would meet me as I got off the bus at The Swan; but I was soon doing the whole journey, including the change of buses, totally unaccompanied. ‘Stranger Danger’ hadn’t yet been invented - and any concerned adult, of either sex, could give assistance to a lone child without the risk of being called a pervert and having their home fire-bombed whilst they slept.
As I gather together my childhood memories of Linton I’ll start with a little provenance. From sometime in the 1800's my maternal great-grandfather, Edwin Burgess, owned a firm of builders and undertakers in the High Street. He had six children, but I only ever knew two of them personally; Philip (my grandfather), and Edith his sister. From all accounts, being from a relatively well-off family, my grandfather had a pretty easy time of it as a lad and so got up to all sorts of mischief. During what would have been the first decade of the 1900's he decided to go boating on the river. He didn’t have a boat - but that didn’t stop him. With the Linton Union Workhouse in the parish there was always a stock of rough, but pitch-sealed pauper coffins on stand-by in the company storeroom. With a bit of plank as an oar these coffins apparently made excellent canoes!

My grandfather’s sister, Edith, I knew as Aunt Edie. When visiting her house, at 88 High Street, my nan and I would often combine it with a call to drop off or collect shoes at Ben Cottage’s cobbler shop nearby. Whilst my nan was being served I would surreptitiously breathe in deeply on that heady blend of freshly tanned leather and pungent adhesive. Come to think of it, all the shops in Linton had their own individual smells. One had a sinus-clearing mixture of paraffin and mothballs; another: the salty aroma of the freshly boiled ham-on-the-bone sitting there on a white china pedestal atop the counter; whilst another, dark and dingy, that you stepped down into, always smelt musty and damp. You just don’t get those sorts of olfactory memories walking round Tesco’s.

With none of my Great-Grandfather Burgess’s children showing an interest in the Building and Undertaking business, it was sold-off upon his death and became Messrs Paintin’s. A board bearing that name was still at the entrance to the yard for all my childhood and beyond. Once I was old enough to contemplate such things, I used to gaze at that board and wonder how different my life might have been if my mother’s side of the family had stayed in the Undertaking business. Mind you, black isn’t a good colour for me. It would have cost me a fortune in Head & Shoulders! Nearby was Sneezum’s bakers shop and I remember one of my aunts working there, trying to keep the wasps off the cakes before the days of electric flying-insect zappers.
A few years ago I drove past my maternal grandparents’ old house on Back Road and it looked rather different from the late 1970's when my Nan, then elderly, frail, and living alone, fell and broke her hip whilst getting undressed ready for bed on a cold winter’s night. Somehow she managed to get herself downstairs, but having left her warm bedding behind she was then worse off; and spent the night alone, in agony, shivering with cold, and unable to summon help. Fortunately, my uncle drove past in the morning on his way to work and seeing the curtains still closed called to investigate. After a stay in Addenbrooks she returned to Linton as a resident at Symonds House, a Council run Care Home; but she would have remembered the building when it was the Workhouse. Ironically, she was virtually within sight of her own former home, but was never to set foot in it again.

Both my Grandad and Uncle Ted worked at Crawley’s Garage near the top of the High Street - later to become the premises of McKenzie & Hayward’s Car Sales. In those halcyon days, before the Health & Safety Police deprived children of any insight into what work was all about, that is where I’d be found most weekdays during my school holidays. If bored with ‘helping’ in the garage I would sit out the front and collect car numbers as they passed - writing them down in a little notebook - a common ‘hobby’ among young lads at the time - and in those pre-by-pass days it was often a job to write them down fast enough to keep up with the flow. Occasionally I would hear the fire siren go, and I’d run like stink to the (old) Fire Station at the bottom of Symonds Lane, behind The Swan pub. As the firemen arrived from their various places of work in the village they would open the (from my perspective) huge doors and drive out the shiny red fire engine. To my eternal disappointment, and in spite of my heart-rending appeals, not once did they let me go with them as they drove off with that high pitched whining growl that HGVs made in those days. I could have at least rung the bell for them!

Before Flaxfields was built the residents of Back Road, via their back-garden paths, could go directly into Symonds Lane, roughly opposite where the Police House stood. Turning right would take you to another footpath over the narrow bridge into the ‘Rec’. The local council had provided a good selection of things to go on: a roundabout, a slide, swings, a see-saw and a bucking-bronco. All set in concrete of course. The thought of suing the council if your child was silly enough to fall off would have been laughable. If the weather was sunny, a nurse from The Union - by that time an asylum for the mentally disabled - might come by, pushing an inmate in a wickerwork-bodied wheel chair; or even more intriguing to a gawping child: pushing what looked like a giant old-fashioned pram frame, but instead of the normal pram body it had a waist-high flat wickerwork platform, with wickerwork sides about 7 inches high all the way round. Recumbent upon this flat trolley would be the contorted, drooling body of another poor soul from The Union. Also on the Rec I remember a carnival procession and fete, in 1953, to celebrate the Queen’s Coronation. One of the floats featured my two uncles depicting the recent conquest of Mount Everest by Edmund Hillary and Sherpa Tensing. The only other thing I remember about the fete was that Pye’s, the local electronics company, had a working display of the very latest thing out: Closed Circuit Television. I actually saw a very fuzzy, shades-of-grey, moving picture of myself on television!

On one occasion my nan took me to visit some relatives at Grip Farm (now covered with houses) on the Hadstock Road. The farmer was Claude Burgess, one of my grandfather’s nephews. My one abiding memory of my visit there is of being absolutely fascinated - as only an innocent child could be - at seeing the lady of the house openly breast-feeding her baby whilst we partook of afternoon tea. Adjacent the farm was a railway bridge, as in those pre-Beeching days there was still a railway service from Cambridge to Colchester, and on to the seaside at Clacton.

In my early teens we moved to Hitchin, in North Hertfordshire, as my dad had a new job there. With no family car, that was the end of my holidays in Linton. They really had been some of the happiest times of my childhood. 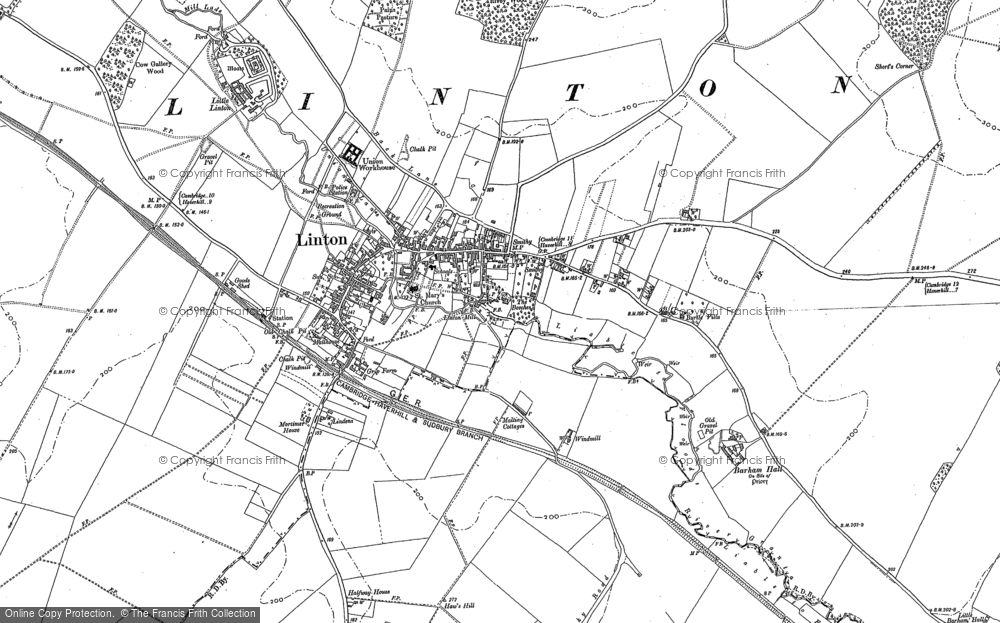