This picture is of Queenie Shuttler's cottage. She used to keep a cow and made the most delicious cream. Her brother, Les Shuttler, drove me to and from the bus stop, about 4 miles away at the White Hart, Poulner, to go to school at Brockenhurst (1968 - 1971). My father arranged this with the local Council, so that I could continue in Grammar School education, despite living in an isolated location. The Post Office was up the lane behind Queenie's cottage (now lived in by Mr Deacon) whose father (?) Farmer Deacon kept his 'happy' cows - they always looked joyful and well cared for. Further along the road lived Gladys Haynes, who left some land. Also, Betty Foden who lived near the monkey puzzle tree had a glass window in the floor of her front room, from where you could observe badgers in their sett. Further up, on the same side as Queenie's cottage, lived Eric Ashby, who made wild life films of foxes and badgers especially. There is a memorial bench to him in the forest near Abbot's Well, not far from Juliette de Bairacly Levy's Pink Cottage. His widow, Eileen - a specialist in bird song, still lives nearby in sheltered accommodation in Ringwood.
Our home nestles between the Red Shoot Inn and the High Corner Inn, on the opposite side of the road. Two books recount living at Roe Cottage: Keeping the Forest by Jack Humby and The New Forest in Colour by my father, Robin Fletcher, former Head Forester. In those days, there was a plantation of larch trees, with foxgloves. At night, glow-worms twinkled green. Nearby, the New Forest cicada was found to be breeding. Down our drive and out on King's Garn, beekeepers put their hives, and local Keeper Gerry Barrell would occasionally drop by with some venison and chat. It was quiet, so the only sound was of the ponies chewing grass or gorse, once the electricity generator was switched off at night. Sometimes Freda Harding (nee Sambers) would call by. A local Commoner, living near Burley, she sometimes worked for Sir Dudley Forward (former Equerry to the Duke of Windsor) at the New House. Both her sons, Eric and Martin worked in the Royal Mews for a while. Freda formerly lived at the Tollbar Cottage near where the Reptiliary is now with her parents Rose who worked for the Duchess of Westminster at Bank and Bill. They recalled the 'cat's eyes' being installed in the road, when Bill shone a torch and saw the gleaming lights, mistaking them for a real animal and asked Freda to fetch his gun for him, until he realised there were too many, in regular formation! At that time, (1952-54 approx) we lived at Holiday's Hill, before moving over to the wooden houses - a gift from Canada - at Clay Hill, Lyndhurst (1954-1962) which had electricity and running water and a copper in the scullery - all 'mod cons'!. My father's 'office' then was a shed - still extant, just, beside the forester's cottage along the Ornamental Drive to Rhinefield House to which he used to cycle. On Fridays he counted out the money there to pay the men and fix their 'stamps' - for National Insurance/Pension etc. At Holiday's Hill there had been a telephone, in case of fire, but water was pumped from a well, and sometimes a dead baby bird would be included. In those days, Freda rode a motorbike, and took her sons in the sidecar. With Bill and my father, I went out to visit the local gypsies. Somewhere, we have photographs of the grannies making bee skeps and smoking a pipe, presumably to pacify the bees. Also of the charcoal burners. After that, we moved to the Isle of Wight for 7 years at Bouldnor, in a bungalow near the Fort with 'ferries at the bottom of our garden', before returning to Linwood. On Boxing Day we would go to watch and follow the Point to Point, a race on horseback, whose destination was only revealed at the start that day. Afterwards, we often ended up at the pub at Emery Down. Nearby lived the film director John Boorman. In Southampton, televison, was a newly developing area. Ken Russell was then also making a name for himself there, particularly with his biographies of musicians, and especially of Delius. My father, who trained at RADA before National Service and joining the Forestry Commission was the first Presenter of Country Ways series by Meridien TV. R A Fletcher 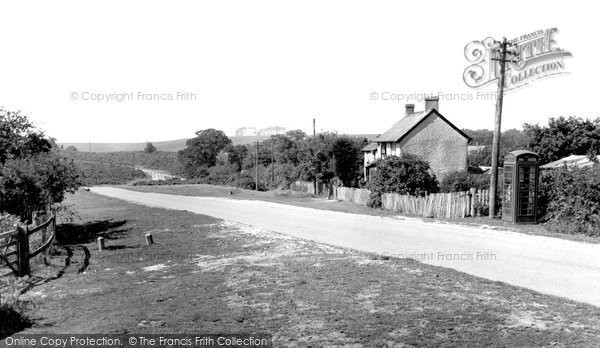