I'm thinking this photo is from around 1968. The new bus station is to the right. That was built beneath the M1 motorway bridge and it and is clearly finished in the shot (the final southern extention of the M1 was finished late 60s. I recall walking over Lilly Lane footbridge - a few hundred yards from this pic - circa 68 and seeing nothing but mud and stranded machinery alongside the railway.) I remember Station Road, before and after the motorway. It was very quaint and countrified before. The massive development was a shocking change (Opposite Station Road was a second parade of shops that came off the main Broadway - Callaces, the Bicycle Repair place was one - but all were demolished to make way for the bridge), but it did stop the regular flooding that used to take place under the railway, and Mill Hill was still a lovely town to grow up in.

Fri Nov 30th 2018, at 6:04 pm
john.rimell commented:
I lived in Burnt Oak between 1957 (when I was 4) and 1976, and one of my strongest memories is walking to Mill Hill swimming pool (along with hundreds of others from the Oak), through the subway under the railway line.
Add your comment
Report abuse
Sun Oct 2nd 2016, at 10:03 pm
scafkat commented:
I lived in Oldberry Road - the less posh side of town! But my grandparents, aunt, uncle & cousin lived in Hale Grove Gardens, so I was very familiar with Mill Hill.
The wartime V1 that came down locally hit Langley Park, & demolished a couple of houses. I remember a choleric Irish porter at Mill Hill Broadway, named (of course) 'Paddy' who always threw kids off the platforms if they were unaccompanied train-spotters. The cycle-repair shop almost opposite the end of Station Road was run by Mr R.N. Callis, & it was an indescribable tangle of bike-parts. I used to go there to get second-hand bits for my home-built machine, & he'd be there in his overalls & flat cap. I watched him put a wheel in his vice, held by its spindle. Then he spun the wheel, & when the buckled part came round he'd clout it with a club-hammer! I used to go to Glover's towards the roundabout for my haircut, & further up was the model-shop, which was H.A. Blunt's in my time. The 'Payantake' near the barbers' was an early supermarket, where customers went round with a basket & picked their own items off the shelves. That was quite a novelty when compared with the old Sainsbury's, where you paid at a little kiosk after going to each counter. There were sides of bacon hanging up, & they used to pat your butter from a large block, & wrap it there & then. The Macfisheries shop on the other side of the road had a tank of eels on the slab - a source of fascination for small children!
I did a paper round from Smiths, which took me up Hammers Hill via the Weavers' cottages, & to the Convent at the top, a Prep School & along to Mill Hill public school. It was a tough round, especially on a Friday, when the Catholic 'papers were published, & someone at the Convent had a braille copy of the Radio Times, which weighed a ton. My bike had no gears, so my legs were like tree-trunks! It was a lot easier going back to the Broadway. For all that effort, I got paid the princely wage of 9 shillings a week (45p) & the only two days in the year that the 'papers weren't printed were Christmas Day & Good Friday.
I go back occasionally, because I visit my cousin, who moved all the way from Hale Grove Gdns to Millway, but most of the shops are completely different now.
Add your comment
Report abuse
Sun Mar 15th 2015, at 8:58 pm
rsarge1012 commented:
My name is Ron Sargeant and I lived in Mill Hill from 1939 until 1964 when I married and moved to Harrow. That photo brings back many memories and yes you are right about the flooding under the old bridge which was pretty low, not allowing normal height double decker buses to pass. My main memories are from the days of steam and the Thames Clyde EXpress thundering through the station heading south to St Pancras.
Unfortunately the station has porter who did not like train spotters and who used to chase us off frequently. Yes I remember the cycle repair shop and all the bikes outside.
I also remember walking with my mum under the old bridge
to the site of where a flying bomb had landed in the Second
World War. The shops in station road never appeared to
be busy as the main shopping area in the broadway was in
in the centre of ths street itself. with Woolworths the Post Office and Sainsburys 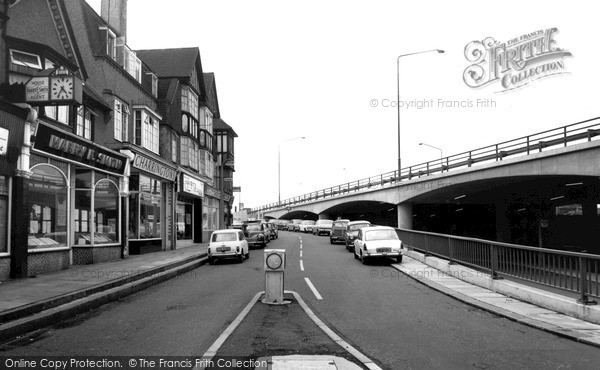