Schooling - a Memory of Radcliffe on Trent.

We moved from Chelmsford to Radcliffe in 1968 - I was 2 years old. I went to Lorne Grove Nursery and my memory of that was the Rocking Horse Toy. I hated sharing it!! I was about 3 or 4 and I remember being so upset at being taken off it I was given a dilute orange and a rich tea biscuit - not a good exchange in my book!!

We lived on Clumber Road backing onto Betts Farm - which I adored - Prince the Lion Woke us up and we went to sleep to his low growling - not so PC in todays animal welfare conditions. I went to Mrs Betts funeral - a very sad day for me as so many stories I could tell.

I used to get a large penny to spend in the newsagent/toy shop next to the Co - Op, and the bank which you entered by the side door, or if in the shop, you went through the internal door - Its was beautiful - full of boxed games, Mechano, Lego and the toys we couldn't afford. There was a rocking horse I dreamt of having - I never got it - but I bought plastic farm animals and anything horsey from the glass topped counter.

I belonged to the Brownies and we had jumble sales in the same hall we met each week - the Methodist Church we went to. My fondest memory of the Brownies was going to the Broadlands Care Home at Christmas and singing - lots of treats too! We moved about in the Brownies as we did a stint next to the pet shop and then next to the Boys Brigade - all lovely Halls.

I used to love kicking through the leaves on the junction of Shelford Road and Queens Street and if I was allowed would go 'the long' way around the path meeting back up with Mother at Shelford Road again - it was the council houses set back and a green at the front. The tree was a Horse Chestnut and collecting conkers was a treat - further up was a sweet Chestnut tree and collecting the fruits to put in the oven was good too.

We used to walk up Cliff Lane to the Memorial Park to see the squirrels and listen to the cuckoo whilst enjoying the lawned areas and shrubbery - I found it so peaceful even as a child. For a treat we would pick the nettle buds and suck the nectar! Pigs were kept up the path and I loved to see and smell them lol.

A visit to the Trent was always an adventure leaping down the steps to be the first one down - or struggling back up with tired legs and having to carry something to help lighten Mother's load. A real treat was being allowed to bring back a froglet!

The Viaducts next to the Rec always allowed me to indulge in the ponies owned by the Lambs and other people on that lane. I craved to have a pony but it was never to be. I envied them dearly - I now have 9 horses and ponies - I never grew out of it!

Old Ken - he was the original Ronnie Barker's 'Open All Hours' character - Arkwright. No more than 1 child in at a time was his sign- hee hee. And Cavendishe shop opposite the Chestnuts Brewery (I think) had steps going up to a more grown up shop - Caroline had super horses .

I remember both the modern infant school that had a super pond, a visit from a Polar Bear that stood in our assembly hall - I was fascinated with its claws that were huge and its wiry white coat, and at Christmas we all were given a small bag of treats - including a tangerine! We went down to the old victorian school (the annexe) to do cooking classes - my turn was making bread and butter pudding - YUK!

We used to watch the boys including my brother who was 2 years older than me play football, British Bull dog or cricket and one of my brother's friend looked like Elvis - so we whistled him lol. The toilets were outside and brick with horrid paper.

My teachers I remember were Mrs Lowe - loved her - Junior School - Mrs Deville - Music Teacher - strict but fair. Mr Terry Waite was our Headmaster and a super man - he forgave me loads for being a wild child - although made me stand up in assembly for writing my name on the Banks blotting paper pads! He also dressed up as Santa - we indulged him - he moved to Canada I believe. He was a really theatrical man so we had lots of singing, plays and he loved being a conductor - my mother and her friend Sheila used to dissolve into giggles once he started lol. Mr Sinclair or Simpleton (I think) who introduced me to theatre by putting on Christmas Carol - no leading roles for me though. There are others I remember but not their names. Mrs Goodacre or Goodyear (something like that) read Watership Down to us - I have never been the same since - I was about 10! I also bought a rabbit from our pet area - she was called Holly and she sadly died in Betts field - I never got over that either!

We did line dancing in Junior School and Simon Cherry was my partner and first boyfriend - we kissed under the sycamore tree when the drought was on and I had ankle socks lines - but I preferred to play at being a horse on the school field! I loved Sports day and always returned with a prize.

Growing up in Radcliffe was the best thing I could ever have had as it was rural life on the edge of Nottingham - sadly it wasn't to last and I had a dysfunctional childhood behind the doors of our house - so I have very emotional and mixed feelings of my childhood - but not of the beautiful village where life was peaceful and rich in many things.

Fond memories of the pet shop and the churches that I did school or Brownie events at and nothing better than us all on parade through the village whilst people waved flags and cheered or were sombre depending on the event.

The Silver Jubilee brought out the tables and food and a token coin given to us children - no idea where it went though. I was a tomboy and had to wear a party dress - which I wore to the Junior School Christmas Party - and bagged a few dances off the boys - I hated the dress - but the food was always enjoyable lol!

I never got over the feeling of loss moving away, but I couldn't afford a home there when I was growing up - I miss the days of my childhood deeply. Radcliffe of the 1960's, 70's and 80's were the days I hold onto - and with a broken heart I see Old Bett's farm being built on. No one would believe the animals that came and went there and the times I sat in those fields trying 'to catch me a rabbit'. Radcliffe was a unique village - now it has lost that village quality, and once my old school was demolished on Bingham Road I knew I had finally grown up.

We moved when I was 11/12 - a move I never got over - and went to Newark, and I enjoyed similar good memories whilst struggling with a not so conventional home. After my parents split returned to ROT to live on Queens Road. This came with happy times and the beginning of my teenage years and young adulthood - my first disco at the Chestnuts - but that can wait for another day lol. 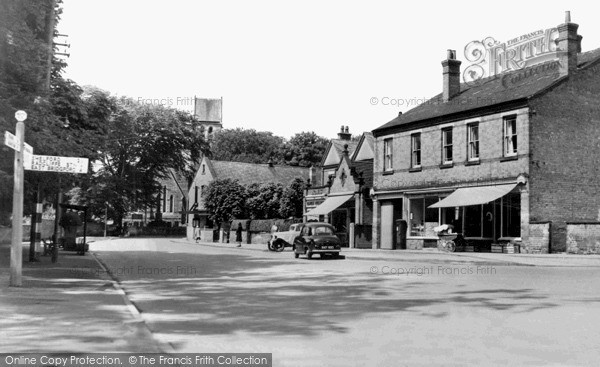