Summer Days In Mary Stevens Park - a Memory of Stourbridge.

As a young boy from 1943 to 1960, I lived in Heath Lane, Stourbridge and I think I spent almost all my free time playing in Mary Stevens Park.
The area where the playground still stands would be where all the children would meet up, then decide what the game for that particular day would be. Quite often it would involve a ball. Coats or jumpers would be thrown down for goal posts if we played football, or one of the trees became the wicket if cricket was decided on.
Whatever the game we all had great fun.
When it snowed we would take our sledges to the top of the hill, near the Love Lane entrance and all speed downhill as fast as possible until the snow disappeared.
As very young children we fished in the lake for 'tiddlers' with homemade nets and a jam jar to carry home our catch. As we got older we'd fish 'illegally' with rod and line in the hope of much bigger fish. There was a bit of a myth at the time about a 'massive' pike that was supposed to be in the lake. (I don't think it could have been true, as there were always plenty of smaller fish.)
Tom O'Dwyer was the Park Keeper for many years. He was a big tall and very gentle-natured Irishman, He'd tell us off when necessary, but I never heard him raise his voice. I was recently in touch with one of his daughters, Maureen, and she told me he lived to the ripe old age of ninety two before he died 'at home'.
I have only visited Mary Stevens Park a few times since I left the area and sadly it has lost a lot of its former self. There were always fantastic flower beds and lawned areas and everyone in those days respected the 'Keep Off The Grass' signs. There was a cricket pitch where local league games took place, with tea taken in the pavilion. The bowling greens and tennis courts still exist, as does the bandstand where brass bands would play on summer Sunday afternoons.
The Annual Flower Show and Fete was always special to us as children. As things were being set up for the opening, you may have been lucky enough to earn sixpence or a shilling 'carefully' helping to carry someone's things back and forth from car to marquee.
As the years went by and boys' thoughts turned from running around chasing each other, girls began to be seen in a different way and many of us boys had our very first kiss in Mary Stevens Park, and off we went on a totally different life.....
I've never forgotten my days as a boy, Mary Stevens Park played a big part in my life and I've never forgotten it. I hope I never will. If youngsters today can have half the fun that I did nearly sixty years ago, without harming anyone .... Good luck to them
John Smith 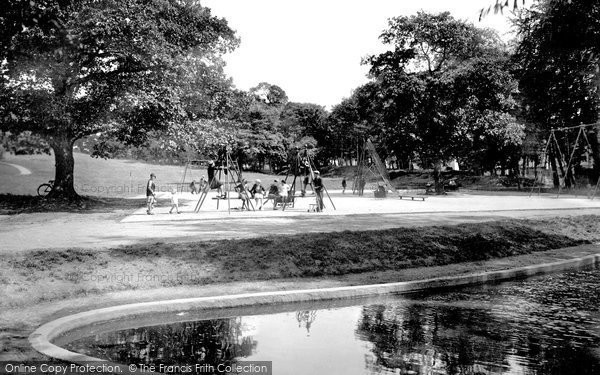