This photograph shows Tideford prior to 1961, a quiet village on the road between Trerulefoot and Saltash. That was all about to change when the new Tamar road bridge was opened connecting Saltash with Plymouth in 1961. What had been a minor road now became the main road out of Cornwall into Plymouth. Previously the main route had been via Torpoint and the car ferry. If that happened today, it is likely the village would have had a by pass. But, in 1961, they just put the new road right through the middle of the village and the houses on the left of the photo were demolished. The new A38 split Tideford in two and, as traffic levels increased through the 60s and 70s, it became increasingly difficult to cross the road from one part of the village to another. At the time of writing the village is still split in two, a monument to the failure of planners to foresee the increasing volume of road traffic

Mon May 1st 2017, at 9:16 pm
Gill Bowen commented:
I am so amazed to see my auntie's house on the 1960 photograph of Tideford. I thought I had lost all connection with my childhood holiday house. I spent many many happy hours in Tideford. The house is the first one behind the Tideford sign . The doctor used the front room as his surgery one morning a week. And my uncle Walter had worked on the Barges that came up to Tideford. Before they demolished my aunties house she wallpapered all the rooms so that when the roof was taken off people could see how well she maintained her house. I loved it there and can still remember the horse and cart that carried the cut hat from the field by the Church. oh so many wonderful memories. Do you have any more 1950-60 photos.
Gill Bowen. 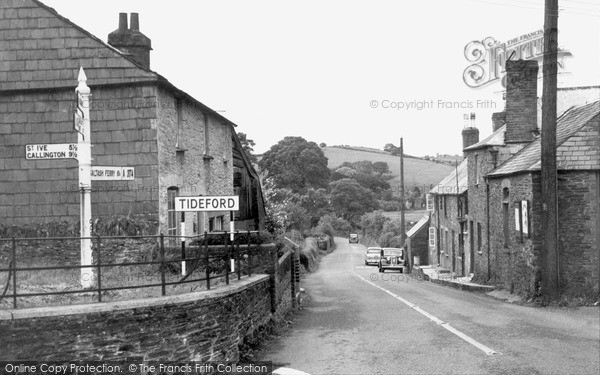