The Castle Lawn - a Memory of Tonbridge.

I have a clearer copy of this photo in the book on Sevenoaks and Tonbridge and have studied it with a magnifying glass.
I was one year old in 1951 (and according to my parents, already walking at 9 months). The posture of the man beside the child (me), leads me to believe that it is my late father Reginald Warrener, Dental Surgeon of 50 High Street, Tonbridge.
The dog would appear to be our Labrador, at the time, Bruce. The two women at the top of the steps I believe to be my mother Stella (on the right) and either her sister Jose or my Godmother, Mrs Lilian Budd who lived at 16 Hilden Avenue, Hildenborough, on the left.
During the Second World War my father was Head Observer in the Tonbridge Division of the Royal Observer Corps and they were based on the Gatehouse of the Castle in the early war years, until they moved to the better premises in the tower of the old Capitol Cinema.
He was well known to all those at the Castle, and that is probably why Bruce appears to be off his lead - which my mother has in her left hand, or else it was my walking reins! In those days we were less neurotic and more animal friendly anyway!
During the 1960s I often went with school friends to the top of the "Motte" where the well is covered with an iron grill. On the wall facing the car park are our initials put there in the summer of 1965. I found some of them about three years ago.
Oh for those halcyon days here in Tonbridge and Tunbridge Wells when there was a bus service up until midnight between the two towns!! 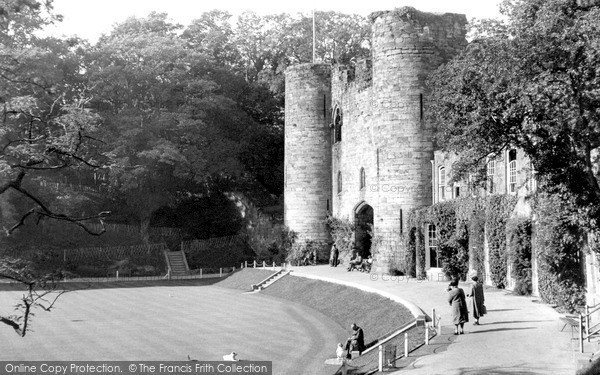