A Memory of West Norwood.

Just out of shot on the left is the turning for Hamilton Road, where my wife, Angela, and I both lived for many years. Some way down Hamilton on the right hand side just before the junction with Clive Road was a small row of shops, including my dad’s newsagents. Neighbouring shops included: Bennetts, the greengrocers, next to a bomb site on the corner of Clive; a hardware store last owned by a Mr Bonner and, briefly, a drapers belonging to my sister and her husband. Further along was a butchers and then The Crown pub, although separating the butchers from “our” shops was Graces’ (the Graces were brothers) wood yard, where my father-in-law, Ted, worked for some years.
Ted’s family (which included my wife, of course, until we married) lived nearer the bottom of Hamilton, not far from the junction with Carnac Street. Whereas I lived with Mum and Dad (and older siblings during my early years) above / behind Dad’s shop, my wife’s family (six in all at one time) occupied a large Victorian house, with three floors and an area. Further down towards Carnac stood an enclave of prefabs. Facing down Clive was a ruined (bombed?) church, between more prefabs on one side and a laundry on the other, opposite Bennetts. Further along, where the road turns sharply towards Carnac Street, was St Saviour’s College (“the College”), a quaint square of alms houses run by Southwark Council. They were known for their beautifully tended gardens and merited a visit from the Queen Mother in the mid-50s.
Much has changed, of course, in the years since we moved away. The row of shops became a string of small houses around 1970 - prompting Mum and Dad to retire to leafy Dulwich. The wood yard has gone and seems now to be Berry Lane, a name known to us only from a map. The College is now Tannoy Square, which looks like an upmarket residential complex (the College chapel remains). The prefabs have long gone, needless to say, replaced by sizeable council blocks at the Carnac Street end of the road and by a single tower block near the site of the ruined church. My wife’s house has disappeared too, along with several similar older properties. The church site itself and that of the laundry have - along with a small industrial complex that was there in our time – become Hamilton Road Industrial Estate.
But some landmarks remain. The Bricklayers Arms has survived on the corner with Carnac Street; and Eaton Court, a squat, sad looking block at the very top of Clive Road, is still there. My brother lived on the third floor for a while just after he married. The Crown is no more.
Angela and I both went to Kingswood Primary (known as Salters Hill when I started school in 1949). Angela was then part of the initial intake of pupils to Kingsdale, whilst I went elsewhere.

This memory is written about West Norwood, Gipsy Road c1955 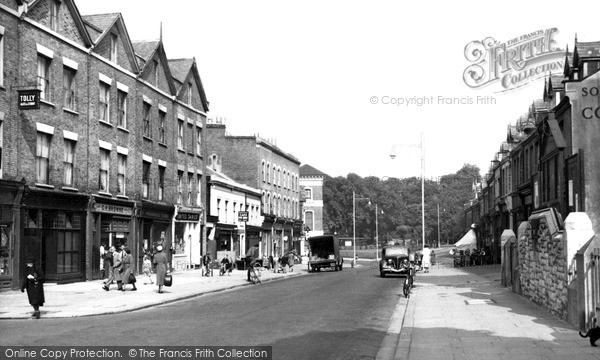