This picture brings back many memories. I was born in 1953 and lived in Coney Hall until 1972, attending school at Wickham Common and then Hawes Down Secondary.
The view from where this picture was taken is not dramatically different today. The parade of shops that can be seen on the right included the newsagent and confectioners, Butts ( for whom I did a paper round for 2 years) and a pet supply store (Pearson's??). The Coney public house ( a place of exotic mystery when I was growing up) is just out of view. On the far left can be seen the rather stylish garage and petrol station. I remember using this facility to put a pounds worth of petrol into my first car, a Hillman Imp. The last time I was in Coney Hall this was a DIY store.

Out of view on the left is another parade of shops, one of which was the Harry Minting music store from which I bought my first ever record, and , my first guitar.I also attended guitar lessons conducted by Harry (ably supplemented by Bert Weedon's Play-in-a Day instruction book). This would have been around 1964 when nearly every kid wanted a guitar in a quest to emulate the beat-boom stars of the day.

To the left of the garage from this view was another parade of shops. Amongst these was Maison Frederick, the local barber and ladies salon, where I was subjected to some hideous examples of the craft of hair-dressing ( I still have the photos to prove it). However, the indignity of being given a hair style that made me look like a convict ( or lunatic) could always be made up for by being treated to a new Dinky Toy from the Wool Shop alongside!

I did later on once venture into the Coney and can reassure you that you didn't miss anything - any exotic charms that it may once have had had long since departed.

I had forgotten about the fish and chip shop. I used to get 4d worth of chips on the way home from cubs ( we used to meet at the Assembly Halls Gates Green Road).

Add your comment
Report abuse
Tue Jun 21st 2016, at 10:53 pm
Jenny Rose commented:
I can remember all those shops in Coney hall and for years have been trying to find out the name of the shop we called The Wool Shop - or maybe that was the name?
Never did get to go in The mysterious Coney - or the hairdressers thankfully after reading report on here:) Horrific memories of my first trip to the dentist!
Nicer memories of the Wool shop, fish shop, sweet shops (three in all - one in each parade). The pet shop where we used to buy tortoises, in the days before we knew better. Remember when sweets came off ration I thought it meant they would be free and my dad telling the shopkeeper, everyone laughing and me feeling painfully embarrassed
My cousin lived in the maisonettes on the left of the photo further up.
Add your comment
Report abuse 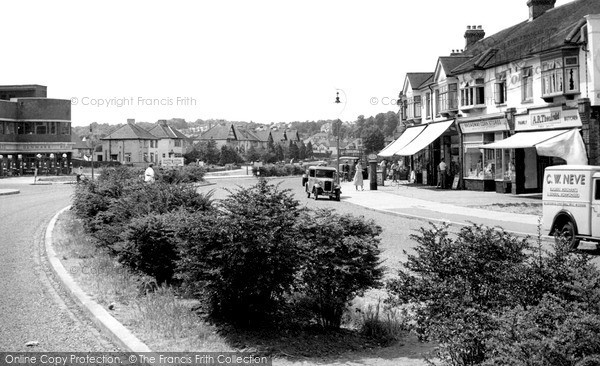