It's a few minutes before 8.30am, and I've just returned with the newspaper for Dad bought from the Riviera Hotel next door. I have to rush downstairs again in time to ring the gong for breakfast - Mr Lacey, the owner of Westhaven Guest House, always lets me ring it before breakfast and dinner, so I mustn't be late. After the other guests have appeared, I dash into the dining room and take my place on the window seat as usual. Looking behind me, the sea is shimmering brightly in the morning sunlight, and the Isle of White is just a grey shadow in the haze.
Breakfast always took too long. I wanted to be out and about, whether it was ambling into Westbourne or Bournemouth to spend some of the holiday money I'd been saving all year, or going straight down to the beach hut near Alum Chine. Even the walk to the beach was filled with anticipation as we passed hotels with names you simply didn't find at home in the Midlands - "Alum Dene", "Riviera", and "Studland Dene" which appears on the 1918 photograph just to the right of centre, off Alumhurst Road. Walking down the steep hill, the exotic-looking foliage of the Tropical Gardens appears and above, the white rocky outcrop below West Overcliff Drive where the yellow open-top No.12 bus ran. Then, just as the sea comes into full view, there's that familiar smell again. For years I had no idea what it was, but eventually found it to be privet flowers. Most people find it a fairly unpleasant odour, but just one whiff and I'm whisked back over 40 years in an instant to that spot at the end of Alum Chine looking out to sea. Perhaps time travel isn't always as difficult as Einstein imagined!
The morning would be spent on the beach - in and out of the sea, playing on the golden sand with my older brother and before we knew it, Mum would be calling us for lunch. A quick climb up the lumpy wall onto the prom (well you don't use the steps when you're nine do you?), followed by a perfunctory hand wash under the tap between the huts, and it was inside for a delicious snack and freshly brewed cup of tea.
"Can we go in the sea yet Mum?" was the next thing to be heard. We were always made to wait for at least an hour before it was considered safe to do so, then it was off with a mad dash to the waves - small though they usually were. Later, warmed-up and soggy trunks swapped for dry, we might run down to the kiosk at the bottom of the zig-zag to see if there was anything different from yesterday, or seek shade in the tropical gardens. There was always that smell of warm plastic at the kiosk from the sun-baked lilos and inflatables. Sometimes we might go for a round of crazy golf - there was once a small one half-way up the Alum Chine zig-zag, but the best was in the lower gardens near the pier - at least that's still there.
As the cliff begins to cast a shadow over the front of the beach hut, there's a general exodus of red-skinned bodies from the beach and we know it must be time to climb back up the hill to the 'digs'. On Westhaven's literature it always said "3 minutes to the sea", but my Dad always added "...but 15 minutes back again" and he was right - steeply up-hill all the way! Once there, a quick glance at the barometer promised another fine day tomorrow, then it was over to the in-out board to slide the covers for rooms 1, 4 and 10 - we always holidayed with an aunt and granddad. Any last remains of the beach were scraped off before putting on our posh clothes - we always 'dressed-up' for dinner, but then everyone did in those days. Having to put on a 'proper' shirt always seemed particularly uncomfortable after wearing just trunks all day, not to mention that it was always too hot at that time of day - pity really or I could have worn my new jacket sporting a 'World Cup Willy' badge on its breast pocket - well it was 1966! If I was ready soon enough, there would be time to let my 'slinky' loose on the stairs before gong time - this was much more fun than at home as the stairs were much wider with a short riser, and it would 'ching' all the way to the bottom.
Bong-bong-bong-bong, and all the guests ambled into the dining room. My view from the window was now of a glowing Totland Bay and The Needles on the Isle of White caught in the dazzling glare of the low sun. The food was always wonderful (except for asparagus soup which I hated, and still do!), and was consumed to the accompaniment of Mantovani, and Jim Reeves to name just two. After dinner there would be a stroll into Bournemouth or perhaps watching the sunset over Brownsea Island in Pool Harbour, before pulling those white sheets over sun-tingled arms.
Has it all changed? Well, the sky is still blue, the sea green and the sand golden. Westhaven has been converted to flats and the toddlers' pool at the end of the chine came and went - it's just been replaced by more beach huts being shoe-horned in. However, much stayed the same until the 20th century disappeared and with it went most of the hotels along Studland Road including the wonderful Studland Dene in the photograph, to be replaced by the ubiquitous luxury apartment. At least the contemporary style in architecture is a little more pleasing on the eye than the Le Corbusier-inspired concrete monoliths which still blight the East Cliff.

Mon Sep 19th 2016, at 12:48 pm
sandradavies77 commented:
I have just been looking at the photos of the County Gate which unfortunately now is a roundabout. My mother, her brother and family used to live there. This would have been about 1914 onwards. They then moved to London and used to go back in the holidays. I believe the grandparents were still there. My mother's granny was called Rose Davis. My mother loved it down there.She used to tell me some lovely stories about things that they got up to i.e. her and her brother used to lie on top of the wall which bordered the road, it was covered in thick ivy and when anyone walked passed, they used to drop their hands on to people's heads and literally terrify the daylights out of people!! She said it was a most wonderful place with thick walls and a lovely enchanting atmosphere. 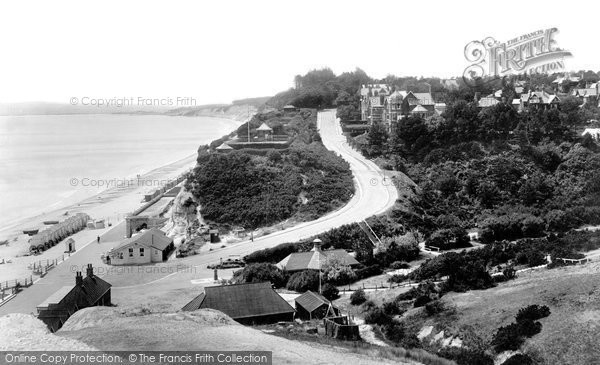