Living In The High St. - a Memory of Wheatley.

The lady on the left is Mrs Bowen; I am the youngest daughter of Mr and Mrs Bowen, and mum and dad owned the shop until about 1961, I think. I have many memories of the square as it was known, here the Hunt would meet up sometime before Christmas, the hounds mingling with the horses and their riders rigged out in crimson...made an awful din. I also remember walking up the High Street in the winter with snow spilling over the tops of my wellie's, to attend school. Miss Wren being the Mistress, and Miss Flood, the only other infant teacher as I recall. The school in Bell Lane was so pretty with chestnut trees overhanging the playground where we would play at playtimes with hoops, skipping ropes and balls, all of us shouting and screaming until the hand bell was rung and then silence. Nobody would dare to move or make a sound, Miss Wren could be quite a tyrant but Miss Flood was a sweetheart. Looking at the picture again, does anybody remember the advertisements? Most were well known products at the time but my dad used to write on blackboards, comical quips such as, 'give him sausages today', people would come out of their way to read them, something different everyday. It all seems like yesterday, if only it were. Leslie Bowen.(now Vullo) 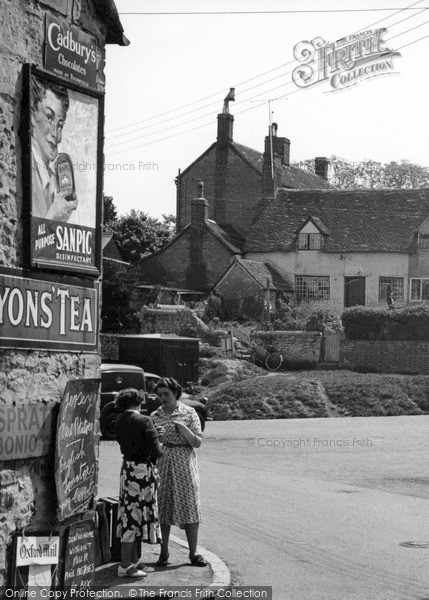