Fire And Ambulance Station - a Memory of Whitland.

The Grosvenor was used as a fire (station 8 then became station B10) and ambulance station until the lease ran out in the late 1970s. The ambulance station was the first to move out, followed 12 months later by the fire service, the new station has been at its current site in west street since 1980 (then called Dyfed County Fire Brigade.). The main building was converted into 4 or so flats for fire brigade personnel, the ambulance (full time manned) and fire watch rooms (retained) were situated through the window directly behind the black and white post in the photo. On top of the roof was a large air raid siren housed in a red covering, the last time I heard this working was during the heatwave of 1976 to call out the fire pump, the siren could be heard for many miles. I remember whenever the siren was set to go all ornaments, cups etc had to be taken down off shelves before the vibration shook them down. In the back yard was the drill tower, the base of which can still be seen to this day.
I moved to the Grosvenor in 1975 and have a lot of happy memories as a group of us playing football /cricket and tennis in the backyard with the ambulance crew in between calls .... those were the days.
On 16 September 2009 at approx 17:45 Mid and West Wales Fire Service received a call out to the Grosvenor, on arrival the roof was well alight. Four fire engines (Whitland/Narberth/Crymych and Carmarthen) and an aeriel rescue pump (ARP) from Swansea West station were in attendance. Fire crews remained at the scene for in excess of 24 hours. The Grosvenor was severely damaged by the fire. It's ironic that what was once a fire station building, and is still a landmark building, has now been severely damaged by fire.

Fri Sep 16th 2016, at 3:14 am
morgansteve818 commented:
my parents John and Sheila Morgan bought the farmers arms public house in 1969,which was opposite, you can see it on the right of the photo,I was 3 my bedroom was the window above the door,I remember after hearing the siren sitting on the window sill waiting to see the men running up the street from all directions and watching the fire engine leave with the ding a ling of the old bell. I had a school friend who lived there in the top flat,spent a lot of time watching the firemen rolling up hoses and washing the engine,great memories
Add your comment
Report abuse 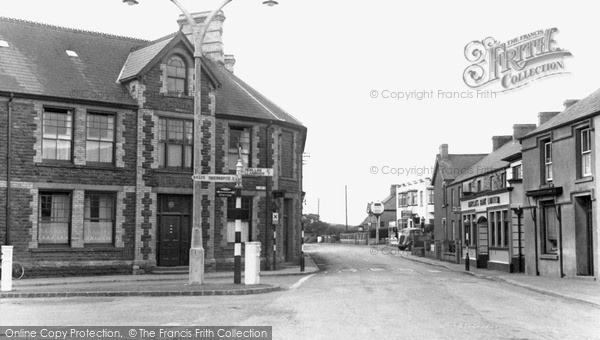