Spanish City And That Very Old Car On The Links - a Memory of Whitley Bay.

This is an iconic picture for me in two ways. First it shows the Spanish City somewhere near its heyday (spring/summer of 1955), bringing back memories of the great band of Harry Atkinson (the Ted Heath of the Bay), who played there. I went to Longbenton C of E primary school with his son, Joss.
But kindly lower your gaze to the lone car. It is a Vauxhall 14 and it is parked outside 7 The Links, my old home. Despite being 16 years old it was the coveted company car of my dad, Eric, works manager for a firm that made concrete lamp standards at the old Cramlington Airship Shed. Despite its age and wartime experiences, the Vauxhall was a good runner, regularly taking my dad, and sometimes myself, to the company's HQ in Hertfordshire. The journeys were epic 12-hour spectaculars, such was the state of the A1. The car would be full of blankets, picnic boxes and torches for use in the event of breakdowns or snarl-ups. The only major drama was when we once went on into London on a Saturday afternoon in summer and the brakes failed. My dad, who with a microscope can be seen in the photo leaning across the front seat, drove on slowly, using only the handbrake, for help. At about 6pm, after much searching, we found a back-street garage in Tottenham that was just about to close. In a sign of the times, the Spurs-supporting mechanics were more than happy to help two distressed Geordies and talk about Jackie Milburn as they bled the brakes. As twilight descended, we were on our way. Sadly, the Vauxhall, with possibly 150,000 miles on the clock, and my dad, parted company in August 1955. He got the sack.
For many years 7 The Links was the Gordale Guest House. My mum, Connie, and dad took it over in June 1951, retiring in the early 1960s. In the school hols my sister, Janette, and I were often 'adopted' by guest families who insisted we joined them on the beach, on walks to St Mary's and to the great impromptu evening concerts in the Panama Dip (where a very young Lulu once sang on an orange box).
Back in 1951 a week's full board for an adult cost 4 15s (4.75). Two years later the average rate was 5 guineas (5.25) but only after a lot of soul-searching among landladies in the boarding house association, who feared they might price themselves out of the national seaside holiday market!
Naturally, I own a Francis Frith print of this very picture. It hangs alongside a painting of St Mary's, mementoes of a very happy time. You couldn't beat Whitley Bay during the Glasgow Fair Fortnight! 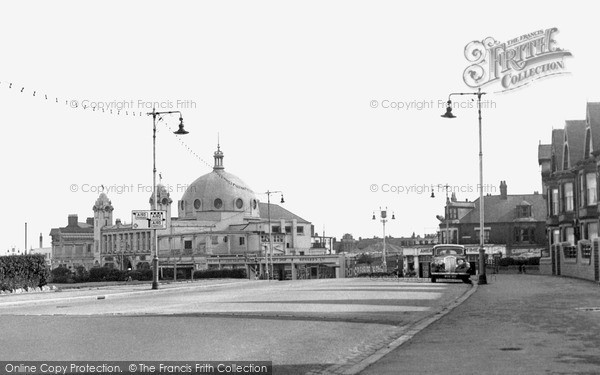