Assistant Matron - a Memory of Wickham.

I was there with Miss Glenday the headmistress, there were three assistant matrons and one matron. My name was Moira Dibben and I was one of the assistant matrons , I am now 80. I remember a girl called Angela Porter who had asthma..I was in charge of the little ones and many of these children had fathers who were in the services and many miles away.I felt it was a very sad life for these little ones.I can remember the tennis court punishment in all weathers made to walk around. I also remember the food was terrrible ..not enough by far .I stood it for two years and then just walked out !

Fri Aug 14th 2020, at 6:36 pm
sandra.deighton commented:
Yes yes, remember it well with dread too. I was a day pupil from 1948 to 1950 From 5 to 7 years of age, my name was Sandra Warren. I recall the fearsome Miss Glenday, Not happy memories! I was in fear most of my time there, I also remember the dreaded tennis court punishment Metres out to me on several occasions. I also recall being denied entry to the brownies because I could not recite the brownie code from memory . I recall the naps we had to take after lunch in the dorms. A teddy bear belonging to one of the boarders was taken and we were all punished by having to sleep on the floor of the dorm instead of the boarders beds.

I still have the 1950 photo of The whole school and staff.
I recall the ugliness of the grey cement render on the bullying, it made it Look and feel very foreboding . I am glad I moved School to wykeham house in Fareham . I am now 76 and the memories are still vivid!
Add your comment
Report abuse
Wed Mar 7th 2018, at 4:06 pm
lamonbusch commented:
I just retired from among other things, 28 years in child welfare. I'm now re-reading my darling mother in law's autobiography, which she wrote in the 1990's following her retirement. She's now 90 and lives with me and her son, my husband. She attended Rookesbury Park from 1935 until the War. Here's what she wrote about this school and it's headmistress Miss Glenday:

"The headmistress was Miss Glenday, a hearty, healthy, horsey woman who appealed to parents as a good, sensible sort. In fact, she was a bully, and in that school she had total power. I believe she was as hard on her staff as she was on the children. The mistresses were a dispirited lot of older single ladies without a teaching qualification among them. School was a "home" lacking warmth, humour and fun. Even friendships among the children were discouraged. Miss Glenday used criticism and ridicule to divide loyalties ... Punishments were frequent, both for misdemeanours such as making your bed without the proper "hospital corners", and running in the corridors, and for poor school work ... We didn't get the strap, but we were sent to sit alone in "the dark room", where school supplies were kept on rows of shelves, and the only light came indirectly from the hall outside. I found it necessary at those times to pretend I wasn't there and try not to think of the ghostly presences which I knew were waiting in the shelves. Later my mother wrote to Miss Glenday forbidding her ever to use that punishment on her children again - and to her credit, Miss Glenday stopped the wretched practice altogether ... On Sunday evenings we sang hymns in the school chapel, miss Glenday at the piano. I should have enjoyed that, but it seemed to bring my homesickness to breaking point ... The awfulness of those days and nights at school was relieved by holidays. It was like going from darkness into sunshine".
Add your comment
Report abuse
Sun Feb 19th 2017, at 8:50 pm
penelopeholt1 commented:
I was there as a day girl aged 7 in 1946 and lasted a year. I was terrified of Miss Glenday who would come up behind us and toss us over her shoulder. There were terrified children who were made to stand in the corner for punishments behind huge pillars or stand behind chairs at mealtimes and try and eat. Memories lasted me a long long time.
Penny holt
Add your comment
Report abuse
Sun Nov 27th 2016, at 11:35 am
Wendy Castle commented:
Thanks for all your comments especially Moira's. It was good to hear about the abuse from one of the staff and to know we weren't alone. I was only 8 years old when I went and only lasted a year before persuading my parents to move me to another school, so I don't remember very much. But I do remember I was always glad to be in sick bay at the odd times because I was well looked after. I especially enjoyed Thursdays when we had figs and custard which I hated and could flush them down the loo when no one was looking! Does anyone remember the sour milk we had to drink for tea because it had been left in plastic mugs in full sunlight for hours? I heard many years later Miss Glenday had been prosecuted for child abuse. Has anyone else heard this?
Add your comment
Report abuse
Fri Apr 15th 2016, at 11:01 am
shume commented:
I was there in 1957, walking round the tennis court all day, standing in the corner in the dark at night,learning Latin verbs as punishment,subjected to bullying from Miss Glenday. Hated every moment, parents away overseas. Also remember Angela Porter.
Wish I could have walked out!
Add your comment
Report abuse
Thu Apr 14th 2016, at 12:32 am
tsacredart commented:
I was a pupil with my sister for 1 year, perhaps 1959. I am 65 now.
My mother had left and we were boarded there. I remember Miss Glenday and the assistant principal yes, I was 8. had to walk the tennis court round in all weather, was very unhappy, cried every night, was put outside in the dark hallway in a corner with a blanket round me.We had paper like cheques that were doled out, pink for good behavior, green for bad.
Found solace in the candlelit chapel, where we had prayers every night.Found myself in the Scottish dancing club when I had ballet shoes!! remeber the Sunday walk to church. Couldnt eat, Funnily enough my mother now in her 80s lives in Wickham. I will be visiting from the US next year.
Add your comment
Report abuse 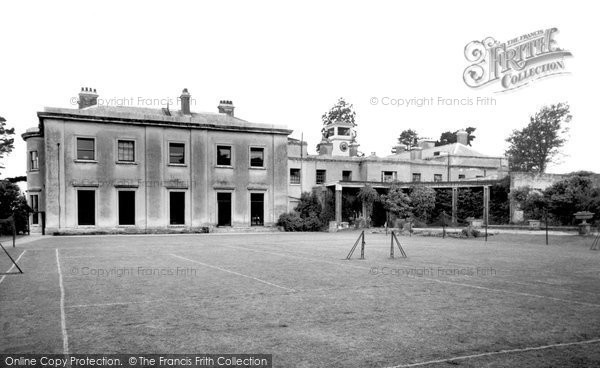