The Bungalow, Widmer End - a Memory of Widmer End.

I am writing in the hope that someone can shed some light on my maternal grandmother, Ethel Mary Wright.

Although William and Ethel lived together with their daughter, Jean Audrey Scott, they were not married as William was already married to Ellen Scott. Ellen lived in the family home with their 3 sons at 59 Wellington Street, Nottingham. Jean Audrey Scott was my mother, who died 3 years ago; hence Ethel Mary Wright was my grandmother.

When Ethel was admitted to St Peter's she was 36 years old. Her daughter (my mother) was just short of her 3rd birthday. Ethel had been admitted suffering from pulmonary TB, and she remained confined to St Peter's until she died in December 1927. She was buried in a common (unmarked) grave at Hampstead Cemetery.

I believe at that time my grandfather, Flying Officer William Scott, was serving as an RAF pilot at RAF Henlow. I do know that, for some time at least, William, Ethel and Jean lived at 12 Stanford Road, Southill, near Biggleswade.

On 10 April 1926 William was killed in a flying accident at RAF Henlow when the aircraft he was flying solo collided in mid-air with a larger aircraft being flown by Flying Officer Charles Lacey. All involved in the accident were killed instantly. William was 49 years old at the time - ie around 13 years older than Ethel.

The accident happened only 3 months after Ethel was admitted to St Peter's Home. My mother had just turned 3 years of age. Upon the death of her father my mother effectively became an orphan as her mother was slowly dying in St Peter'Street Home. Incredibly William's wife, Ellen, took my mother in and raised her as one of her own in Nottingham. It is possible that my mother's existence was known about prior to the accident as William and Ellen's oldest son (also William) apparently witnessed the flying accident in which his father died.

Although my mother was raised and cared for by her father's wife she was never given any information regarding her history. However she did have an inkling that she was born in Shirebrook (north Nottinghamshire) and that her mother (Ethel Mary Wright) was from Sheffield. Research that I have carried out since my mother's death tends to suggest that my mother was probably right in her belief.

I believe that in 1918 my grandfather was serving in the RAF at Northern Aircraft Repair Depot, Sheffield. It therefore sounds feasible that he met and formed a relationship with Ethel whilst in this posting. The result was the illegitimate birth of my mother on 20 March 1923. Her birth was registered in Mansfield District - mother: Ethel Mary Wright; father: Flying Officer William Scott. So it all seems to fit in.
NB: I have discovered that William also fathered another illegitimate daughter (Ivy Scott) to a woman in Nottingham in 1921. Seems like he was generous with his affections!

At some time following the birth of my mother and 1926 William was probably posted to RAF Henlow. Whilst posted there he, Ethel and my mother lived in Southill.

So far I have been unable to establish which Ethel Mary Wright was MY Ethel Mary Wright. It is a mystery to me why she was admitted to 'hospital' from The Bungalow, Widmer End when I thought they lived in Southill. Had she, William and my mother moved to Widmer End from Southill before she was admitted? Was The Bungalow some sort of staging post for sick people before being sent on for more intense care? Had Ethel and William separated and she moved to Widmer End?

I suspect that Ethel was buried in a common grave because there was nobody around to buy her a 'proper' funeral and grave. By the time she died her partner, William, had been dead for more than 18 months. Possibly her family (assumed to be in Sheffield) were unaware of her circumstances and did not know that she had died. Or maybe she had been disowned by her family for having an affair and illegitimate child with a married man.

If anyone is able to throw any light on The Bungalow, Widmer End and it's previous owners or occupiers I will be very interested in hearing from you. Contact details below. Any leads that could help me fill in gaps will be very much appreciated. 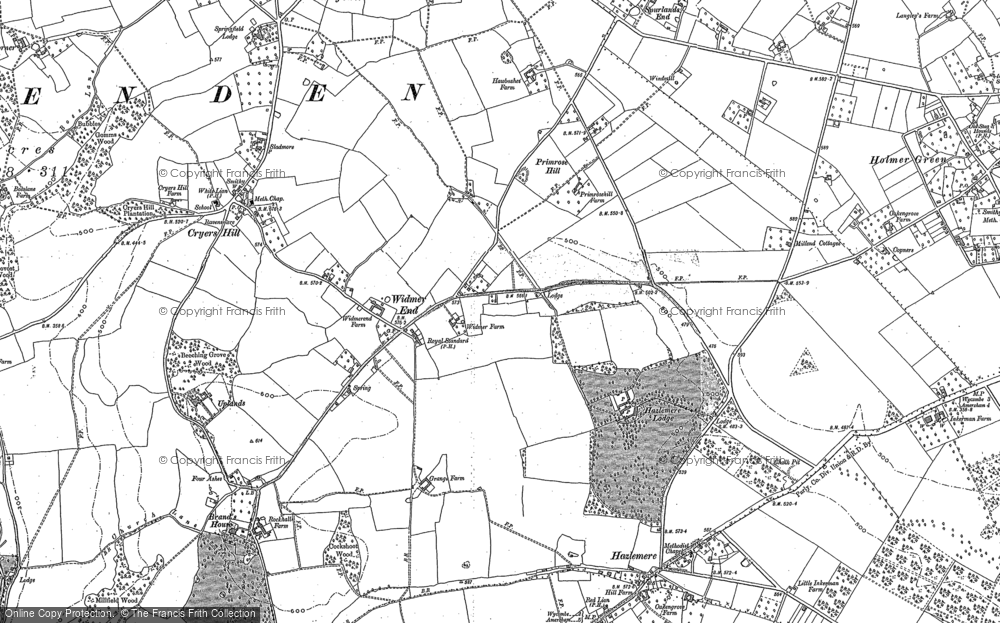