Willingdon Childhood - a Memory of Willingdon.

I was born and raised in Willingdon and lived two doors away from the previous correspondent Ian Friend. I also attended the school referred to as Willingdon Church Hall before a new school was built in Rapsons(?) Road, Lower Willingdon. I have very fond memories of my childhood days there and spent many hours playing and exploring the Downs nearby. The Chalk Pit above Willingdon was a favourite area where I explored for fossils and iron pyrites. One of the unique features of the Downs (I think) was the dew ponds. These were round concave excavations created at appropriate positions at or near the bottom of long slopes. These ponds were created for sheep to drink and accumulated water from dew that condensed when cold air moved down the slopes at night and formed droplets when it drifted over these ponding areas which had retained warmth from the daytime sun. These seemed a very effective idea with no running costs and I used to catch newts and tadpoles in these ponds. I do not know of any other areas where these ponds were created. Perhaps they were unique to the Sussex Downs.

Wannock Gardens and the Old Mill Gardens were also frequently visited and we (myself and friends) used to take short cuts through the gardens on our way to The Glen where we looked for eels in the stream that ran through The Glen and fed the water mill at the mill gardens. Unfortunately I was also remembered by Mr Wootton the garden's owner, as on one occasion on returning home through the gardens I was carrying an empty lemonade bottle from a picnic we had had. I was making the bottle move backwards a forwards towards a shiny globe known as the witches' circus which distorted the reflections when I accidently hit the globe. It shattered into a thousand pieces and I was promptly apprehended by Mr Wootton and the police were called.   Nothing eventuated from this however, as I was able to convince all concerned that it was an accident. The incident is recorded in a book called 'The Gardens at Wannock' written by Jennifer Wootton. (The bottle was confiscated and although there was a 3d refund on its return I never got it back - can't complain I suppose!

For several consecutive years a group of friends and myself used to pack up our lunches and take what we called our 20 mile walk. I don't know how far it actually was but it sounded good. We would walk from Willingdon over the Downs to Friston, from Friston to Birling Gap and then along the cliff tops into Eastbourne and back along the road to Willingdon. This was when we were aged about 9-11 yrs. I wonder how many kids could do that today or would in fact be allowed to.

I had an uncle who lived in Southdown cottages near The Triangle who kept ferrets and dogs and went rabbiting at week ends. The hills were alive with rabbits in those days (before myxamatosis) and he would come home with dozens of rabbits threaded onto poles over his shoulder. Most would be sold through the local butchers, but of course we never went short of a good rabbit stew either.

Two local characters kept the streets clean and the verges tidy around Willingdon - a Mr Lyons and a Mr Hyland. These two characters had a two-wheeled cart they pushed around the streets. They lived near each other in cottages opposite the recreation park (the rec). The rec was supervised by a My Easeman(?) who used to watch what was going on in the park from his top bedroom window. He had a thing about us standing on the swings and we used to do so deliberately when we knew he was watching. He would then hurry over to the park and we would climb the nearby trees and hide. The poor man must have been terribly tormented in his job but we thought it was all a great joke.

My mother worked for years at the bakery shop in The Triangle and dad was a bakery manager at Hovis Bakery in Polegate for some years.

I've been back for a visit a couple of times and have been astounded at the amount of building that has gone on since I left. Seems a pity that all those lovely fields I once knew have been built on, still ... I am very pleased to learn that the Downs have been declared a National Park.

Fri Jul 10th 2020, at 3:49 pm
pip58 commented:
I also remember playing by the Chalk Pits, I would have been under 8 years old. I was afraid when I heard the bull mooing in Chalk Farm below. We also played at the dew ponds and collected tadpoles and newts, who rarely survived. We lived just at the foot of Butts Lane. The tree is still there (over 50 years later) with large branch that I used to sit on because it resembled a horse. Lots of memories of Willingdon, including the thatched cottage which is in some of these photos, and must have been demolished in the 60's.
Add your comment
Report abuse
Sun Apr 8th 2018, at 6:20 pm
lucybeale.uk commented:
Lovely to read your comments. My !ate Great Uncle and Auntie lived in Tott Tree Road from 1968 to the late 1970's when they passed. William and May Miles where their names and William worked at a department store in Eastbourne.
Add your comment
Report abuse 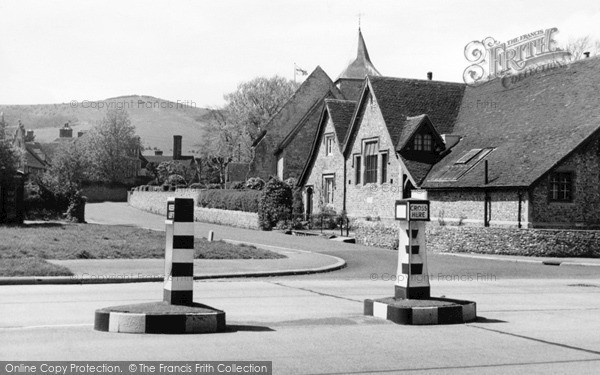