At the bottom of Willsbridge and Brockham hills, on a busy Bath to Bristol road, stands an unassuming little building called The Queen's Head public house.

Unlike other pubs in the vicinity, The Queen's Head has never been wrapped up in all the usual alehouse folklore of highwaymen, cut-throats, and kings, and very little, by way of fact, or fiction, has ever been written about it. What follows is fact, and research reveals a fascinating history that tells the story of an establishment that not only served up ale, but which performed a whole variety of other hamlet, and old Bitton Parish functions.

Willsbridge hamlet before The Queen's Head - The name 'Willsbridge' means 'the spring, (or well), by the bridge', and is Anglo Saxon in origin. In those days it was known as 'Wylsbrugge'. Now much extended, the original settlement was a hamlet at the Mill Clack Brook (now called Siston Brook) bridge - in other words the little bridge and immediate surrounding area where The Queen's Head is situated.

Roman remains have been found nearby at Oldland Bottom and Stout's Hill. It may be that the section of the A431 on which the original Wylsbrugge hamlet is situated is part of the Roman road, the Via Julia. It is possible that a house of refreshment has stood near, or on, the site of the present Queen's Head since Roman times.

The Goldwell was an important Anglo Saxon public well formerly situated at the roadside (near present day Oldbury Chase and Willsbridge Mill on the A431). It was still operating when in c.1779 the historian Rudder wrote of the water being 'reckoned very fine and pure. There is a pump erected, and a tin cup chained to it, for the use of travellers, to drink as they go along'.

The Rev. H.T. Ellacombe called the well 'a place lying on the south of Stout's Hill, near which place was a gate entering the forest. By the mid nineteenth century, however, this public well was no more.

Our story now begins: The present pub is certainly a c.1660 to 1670 building with eighteenth century, and later, additions. Its seventeenth century appearance was that of a simple three bay house with a central door and porch, made from locally quarried stone. A substantial building when compared with former neighbouring cottages.

It began its life as a private house whose occupier brewed using water from Mill Clack Brook or a nearby well. Then it opened up its kitchen and fireside to drinkers and became an alehouse. It is not clear at what date exactly this change occured but by 1719 The Queen's Head was a licensed house.

It was built upon the Common Field within the Manor of West Hanham. This was the field shared by the hamlet inhabitants for their animals, for crop growing, and for recreation. It seems inevitable that the most important house built on that field should acquire a communal function also. The Creswicks of Hanham Court were Lords of the Manor, and West Hanham Manor was served by St. George's Chapel of Ease.

In 1685 Francis Creswick described his West Hanham lands, making mention of 'divers common fields, common meeds and other fields which the owners have, know their own distinct lands.. .wastes, fields or inclosures.. .cottages, with gardens and Barn's and appurtenances'. One of these dwellings was the more substantial house owned by Mrs. Masters on the West Hanhan Manor side of Willsbridge hamlet.

Built for Mrs. Masters in c.1660 at about the same time as nearby Londonderry Farm, this house stood on half an acre of pasture and also boasted an orchard. Mrs. Masters also owned other small parcels of land in the vicinity including' shooting over Keynsham way near Doverley' and some arable land on Whaddon acquired from Richard Jones of Londonderry Farm. This house belonging to Mrs. Masters was very probably what would become The Queen's Head.

The pub is shown on a map of West Hanham Manor drawn by, or for, Francis Creswick in 'about 1670'. It is interesting that The Queen's Head seems to be the only alehouse noted on the map. This is not because there were no other alehouses within the large area of West Hanham but because it had the most important role to play in Manor life, and because members of the Creswick family knew the owners and attended meetings there.

And what of the queen of the name? At present a portrait of Victoria dangles in error from the pub. 'No queens who have far greater claim to a picture are Charles II's consort, Catherine of Braganza, who stayed at Sir Henry Creswick's Bristol residence, or, Anne, who came to the throne in 1702.

Farming was carried out at all levels down to the poorest form of pig and allotment husbandry. Much stone was quarried in the Southern-wood (flow called Willsbridge) Valley, and in West Hanham Manor. Coal mining, though not actually a Willsbridge activity, had long been an important industry in all the surrounding hamlets.

In 1716 Mr. and Mrs. John Pearsall, who were Quakers, settled in a thatched cottage by Mill Clack Brook in the area opposite The Queen's Head which, by all accounts, was largely un-reclaimed forest land. It was here, in about 1730, that John. Pearsall built his mills for the rolling and slitting of hoop iron, so extending Willsbridge and increasing its importance. Much of this iron was used for roofing buildings. A carpentry shop, smithy, and workers cottages were also part of this small industrial centre. It was the Pearsalls who built Willsbridge House on Willsbridge Hill, the forerunner of today's 'castle'. Their business would flourish until 1816.

In 1727 the River Avon was officially opened to water cargo between Hanham and Bath. Stone, coal and foodstuffs such as brewing ingredients could now be transported in this way. Another communications improvement was brought about at the same time with the setting up of a turnpike road with a tollhouse at Brockham Hill. This became known as the Willsbridge Turnpike and the superior quality of the turnpike road made travelling much easier for horse drawn carts, carriages, and coaches.

From its earliest days as an alehouse The Queen's Head became a venue for both Hanham and Oldland Vestry meetings. The Vestry members were parish administrators' ecclesiastical parish councillors. Usually the two Vestries met at their own chapels of St. Anne's (Oldland), and St. George (Hanham), but occasionally the chapel-wardens, overseers, and way-wardens who made up their number met at The Queen's Head. Here they discussed accounts, poor relief, and obstructions on the highway.

The Queen's Head was also the venue for the poor man's court, the Court Leet. These courts would probably have assembled in the larger first floor room upstairs, away from the drinkers gathered about the kitchen fire downstairs.

Each court had a jury of about twelve local men and the whole was presided over by a steward. Only minor offences, with the usual punishment of a fine, were dealt with. Cases that came up concerned unlawful pit digging; petty theft; the blocking up of roads; breaking of the peace and general trouble-making; the sale of bad ale or food; and unruly alehouses.

No one party, or manor, held Court Leets at The Queen's Head, but several. On 22nd April, 1719, for example, six held sessions. These were:

i) Dennis Rogers, tythingman, of 'Hanham, the second meadow.'

iii) The tythingmen of Upton Cheyney.

iv) The return of the petty constables of Bitton.

v) The return of the tythingmen of Oldland.

vi) The return of Roger Harding.

Another function of the Court Leet was the yearly appointment of constables and tythingmen, and also the way-wards who helped to look after animal pounds and common pasture lands.

It was traditional for a feast, and general merry making, with a song or two, to take place at the close of business. The Queen's Head Court House would have been filled with noise and baccy smoke whilst a child servant brought round bacon, and tankards overflowing with beer from the brewhouse. 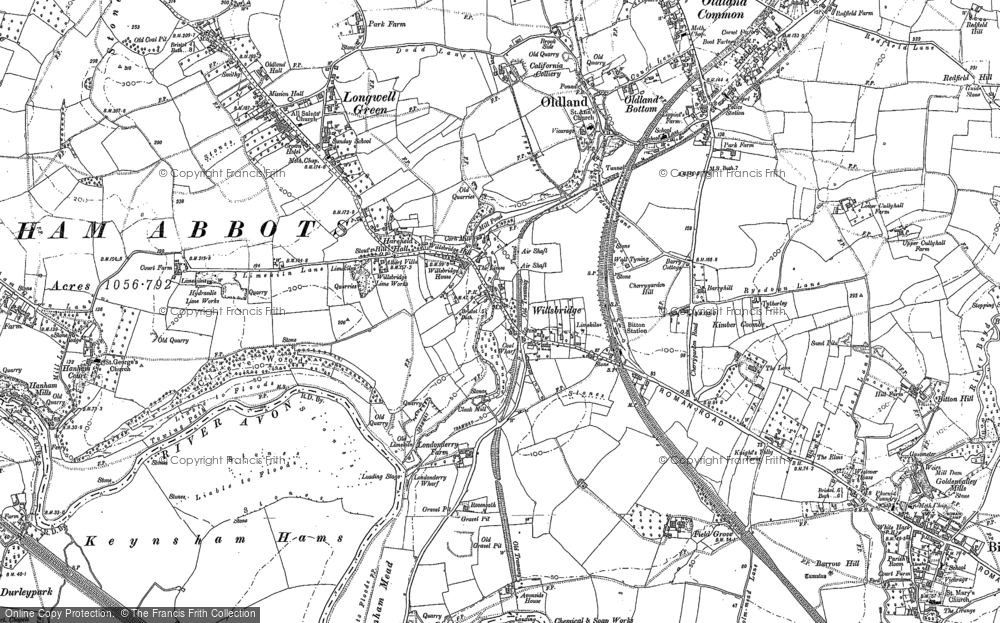