My Dad - a Memory of Windsor.

My dad's uncles purchased a horse and cart with their gratuity from WWI and travelled from Cippenham to the market in the Guildhall. They sold crockery they bought from barges on the Grand Union canal direct from the Potteries, you could order replacements for broken crockery. There was the usual traffic jam on Castle Hill and dad would jump off the cart and race up Kings Stairs(?) (they were open to the public then) race across the castle and out the gate, still beating his uncles to the Guildhall.

Sun Apr 15th 2018, at 6:07 pm
Dave Hill commented:
I know Harold had a daughter, my bro Pete and his daughter Susan helped clear the yard ( for housing I think) after Harold died (started off as a farmyard but Harold collected everything, ended as a junkyard-but very useful!) Pete died but Susan was still in touch with Harold's daughter but Susan's moved up to Stoke! We dumped some granite setts (cobbles to you) from demolishing the big hotel in Bracknell beside the duck pond in 1957, they were still there 40 years later but I bet people building all those twee shops in Windsor snapped them up!
Add your comment
Report abuse
Sun Apr 15th 2018, at 11:21 am
helencann commented:
My mum remembers Harold and his father Fred Bowyer who was her great uncle. They used to play on the farm when they were kids in the 50’s. My mum’s lost touch with that side of the family now and she wonders if you know if they had any children of their own...
Add your comment
Report abuse
Sun Jun 25th 2017, at 4:19 pm
Nigel Marsh commented:
Hi Dave sorry about the delay. The only thing that I can link with is a place that I think was called Bowiers (sp?) yard(near the site of Hawthorn Hill racecourse) which my uncles would take me to in order to obtain all manner of salvaged items
Add your comment
Report abuse
Wed Aug 26th 2015, at 6:54 pm
Dave Hill commented:
can't say I knew John Hill, there's a lot of us about! Did you know Harold Bowyer in Winkfield (Row), we did, wonderful character
Add your comment
Report abuse
Tue Aug 25th 2015, at 11:47 am
Nigel Marsh commented:
Addendum to last post

In the mid 1960s I think that John Hill and his family moved down to one of the semi-detached (?) cottages near Fifield which is situated approximately 3 miles from Maidenhead (to the north) and Windsor (to the east).

I am sending this message for two reasons.

I think my mothers family the Kirtland's may have known the Hills. The reason for this is because about 1960 we moved from Alma Road Windsor to Home Farm on the Drift Road near Winkfield. Next door to us (about 100 yards or so there was a man called John Hill. Judging by the way my late uncle spoke of him I imagine that the two families went back further.

Also
I have recently been sent a picture by a second cousin who thought that one of the boys in the picture was my uncle Roy (on the left). Though there is a resemblance, and, the boy to his right could be his older brother Kenny, I can not be sure. I wondered if there are enough Windsorians of sufficient age left who might tidentify anybody in the picture or say exactly where it was taken.
If the picture has my late uncle Roy in it, would take an educated guess that it was taken not far from Oxford Road or Spital.
Please excuse posting this link https://thekirtlandofwindsor.wordpress.com/ 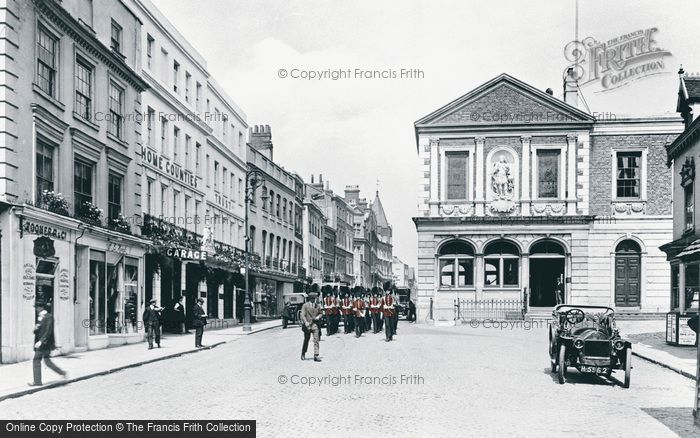