I was just 9 years old when my family moved to Wisborough Green in December 1951, where my father - John Edward Penney MA, LTh - was vicar until his retirement in 1976.      I went to Wisborough Green Primary school and can recall these names of other villagers: Pullen (I danced round the Maypole with Joyce Pullen at Primary School in 1952!!) Cooper, Cheeseman, Gent, Enticknap, Balchin (the builder) James (Jeff in the Handy Shop/ Maurice his brother, whose widow Pansy now lives in Slinfold) Puttick, Clark (the nurseryman, whose son Eric was still in WG, the last time I heard of him). There were 2 Butchers' shops - Knights and Peacocks - and 2 Grocery shops - Forest Stores and Grinsteads (now Wisborough Stores) plus a Bakery on the former site of the windmill, a Post Office and the Handy Shop (see above). In September 1953 I went on to Collyer's Grammar School in Horsham, travelling daily on the lumbering Southdown route 63! My summer holiday work from about 1958-1961 was picking apples at Capt Masters' farm (Amblehurst on hill out of WG on the way to Petworth - trees now all pulled up).    I moved from WG in 1967 to live nearer work in Croydon - and lost touch when my parents retired to Exmouth in 1976. This picture of the north side of the Church is very familiar to me - though I usually approached it (St Peter ad Vincula) from the south side, where the Vicarage was located: the "New" vicarage was built in about 1963 or 1964, funded by the sale of the "old" Victorian vicarage grounds as 5 or 6 building plots (the luxury houses cost about £12,000 then, as I recall!) 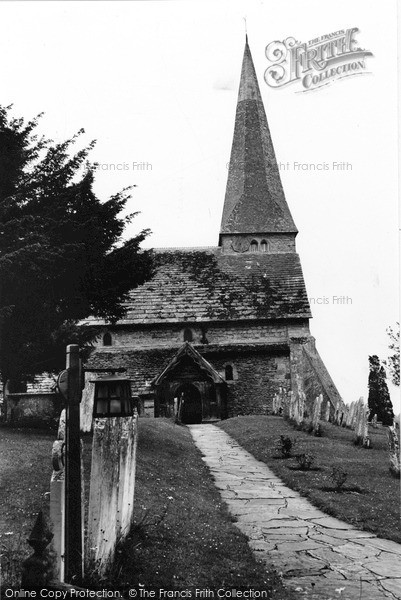