Sweetwater Lane - a Memory of Witley.

I was born in 1928 in the first house on the right on Sweetwater Lane. Still there, it was one of many "tied" houses occupied by those who worked for the Enton Hall estate of the Chichester family. They gave the Chichester Hall to the village in 1937. My father, born in a home at the top of Station Hill next to the Petworth road, had worked for Mrs Chichester (J and P Coats family) since the early 20's. Like my father before me, I attended Witley village school, opposite All Saints Church. The long-lived Harry Swallow was headmaster. He met my own children at a flower show in the village in 1980. Before WWII, we were so blessed, growing up in the beautifully wooded area around Sweetwater, going up to the Hall for milk, butter, cheese-fresh vegetables and fruit from our own and the Hall's gardens. Preparing the cricket pitch mid week, (the Izzard's, Chivers, so many other familiar names) then a match against another local village every weekend was a particularly enjoyable pleasure. When I was ten, I began to work on Sats. at Wooton's radio shop, connecting and charging the lead acid batteries used to power home radios at the time (no electricity in homes). Until 1943 I also delivered newspapers for Mrs Stent to the Enton area every morning before riding my bike to school in Godalming. In April of 1944 I left school, and home, to become a lab assistant to (Sir) Fred Hoyle in the radar labs of the Admiralty, which had taken over King Edwards School at the beginning of the war. Fred persuaded me to continue my education (nights at Guildford Technical School). Then in 1947, when the labs closed, I moved to London University graduating with a Physics/Maths degree in 1951. My 4 year younger brother Peter, fully apprenticed as a cabinet maker at Milton's, emigrated to New Zealand in 1952. I left for Canada in 1953, then my parents Archie and Eleanor moved to New Zealand in 1956. My career brought me back to Europe, Middle East and Africa many times. With my own family I lived in Herts in 1979-83, then again in 1986-89 in Ascot. In 1986 my brother Peter came from New Zealand so that he and I could attend the memorable candle-lit (no power 'cos of huge storm) 150th anniversary of the founding of Witley School. We met so many of our early friends again.
Now, as a happy old retired geezer, I live in Fort Myers, Florida, I am consoled by so many memories of the White Hart, the British Legion, Dr. Booker and life in Witley so beautifully prompted by the Frith collection. I have visited Witley, Chiddingfold and Godalming many times over the past years, and hope to do so again next year in 2015. Thanks to all--Michael Phillips 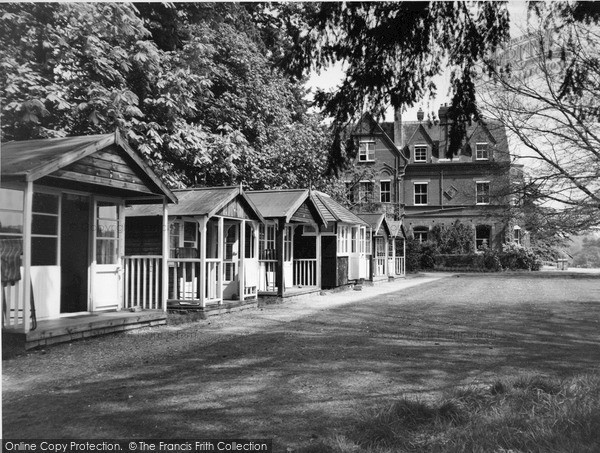