I remember being taken to Wiveliscombe as a young boy in my Uncle Jim's dark green Standard Vanguard, he ran the Rock Inn at Waterrow 1954- 1965. He would take me to the toy shop at Wiveliscombe Square called Richards and Lanes (later became Twiggers) to buy me a Dinky or Corgi car. I was only four in 1960. Our family had moved from Holbury near the New Forest in Hampshire to Somerset in the late 1960s. In November of 1967 we (the Bishop family) bought Upingtons, 6 High Street, a strange Georgian house (I think it was haunted) bought from the Maunders family. It had three floors and two cellars and full of dry rot and death watch beetle. My father (a very tall man) used to be in the merchant navy as a sea captain, Peter Bishop, being nearly 6ft 5 inches tall - my school new friends would say "Hi Julian, how's your 7ft dad?". There was a cake shop/restaurant next door run by the Rates family. I did a paper round delivering Sunday/daily newspapers for Mr & Mrs Goodings, the round took me to Rotten Row past Kingsmead School. Neil Monk taught me the round (son of Mr Monks off the Square). His brother Sven Morley was a school buddy along with John Stone, Steward Floyd, Donald Hanniford, Keith Lowe and Austin Maddock to name a few, I think he had 4 or 5 sisters? His dad Lester had a Ford Zodiac, but would let us drive his beat-up Austin A35 van around the farm. Mr Jones was the headmaster, there were two Knott brothers that I also remember. Malcolm Reid a fantastic music teacher and Sid Hill (the tester) and Mr Vickery to name a few. Mr Stenner worked in the co-op. there was Gadds Grocers, a county stores, a regular market and down the road was the end of the branch line to Barnstaple closed in 1966?
The bank manager and his two son Donald and Robert Wainwright had a fantastic train set and lived over the Westminster bank. May Bank holidays were celebrated with an annual Donkey Derby. the fire station had two engines and when the air raid siren went off everyone came a running. Wivey-wash came years later with a group of Iranians come to live above the the ex grocers stores (the name escapes me). There was two large general stores called Currys. We had our first colour TV in 1972 from Radio Rentals. Power cut were frequent and home-made lamps made from pickle onion jars filled with green paraffin would light the house (an accident waiting to happen). Wivey got the go ahead to have a bypass in the mid 1970s, the town being on the A361 was constantly gridlocked in the summer.
Wivey was buzzing with sports, Wivey Colts, Tennis Club, Swimming Galas in the 'rec, cross country running (catching a lift on the back of Tidballs farm trailer.. that's if Roger Masters didn't catch you). We used all the stores in Wivey, Muddochs butcher had sawdust on the floor. The Co-op used pink milk tokens. Furze's general electrical stores where you could order 45 RPM records, that's if you could be understood. Poor old Mr Furze, (God Rest his soul). I tried ordering 'Legends of Xanadu' by Dave Dee Dozy etc. neither me or Pete Hockin could be clearly understood. Petrol was bought from either the Jet Garage or from Peter Jones's father Rainer. When we first moved to Wivey the was a man in a dog collar who called himself the Right Rev Stickings. As an alternative to the regular St Andrew's Church. Rev Stickings (a Stanley Unwin look-alike) would organize summer days out. Colin Walker was the driver from Wivey Coaches. There were trips to Weston-super-Mare, we would stop past the Ross Chicken Factory just a few yards clear of the smell to say a little prayer before enjoying lashings of ice cream and Ginger beer - hoorah. Nobody told us we needed to bring with us any spending money? Lucky the two Blackmore brother gave us a few shillings and the Rev loaned us a 10 shilling note for Alex and myself. Austin, Sven and few other school friends went potato picking, I think I earned ten shilling and they earned £2. I don't know how that worked out? We would also pop over to Milverton on our bikes, passing the BP garage (Ralph family) on the way. My mum decided to get the first of many horses and ponies in the 1970s, the Bridges family that ran the vets practice were kept busy. John Treblecock from the stables at Tolland would give us riding lessons and help out with the shooing. The Brooeke family were friends of the family, they had a pretty blonde daughter called Michelle.
In 1972 I left school, my careers teacher Mr Maybe was told about my quest for the film industry, he said "I could get you a job a Ross Chicken Factory or perhaps you like to go to College at Taunton Tech". Part time I worked as a waiter with Julie Milton. I worked for two of the loveliest of the couple that ran the Court Yard hotel in 1972-75. The Biggs family, yes his name was Ronnie, just like the other famous one. He would play the piano in the restaurant and Eunice would sing 'W e Seem like Passing Strangers'.
Ron Gooding (local Newsagents) would rent garage space from us, there wasn't a week that went past when his beloved light green Austin A40 wouldn't get pranged.
In the Square (yes, cars parked there once) was Richard and Lanes (I went to school with Annie), Dobbs and three Co-op stores, four main banks that opened daily ,County Stores and the post office, heading towards the famous Adams shoe shop and tarpaulin leather emporium.
Walking to school we would pass a row of orange Nuffield Tractors, Jones suppliers Farm Machinery.
I hope these few names evoke a few memories. Any photos of wivey 1960- 1970 would be much appreciated.
Happy reading.
Julian Bishop videotraxjulian@tiscali.co.uk 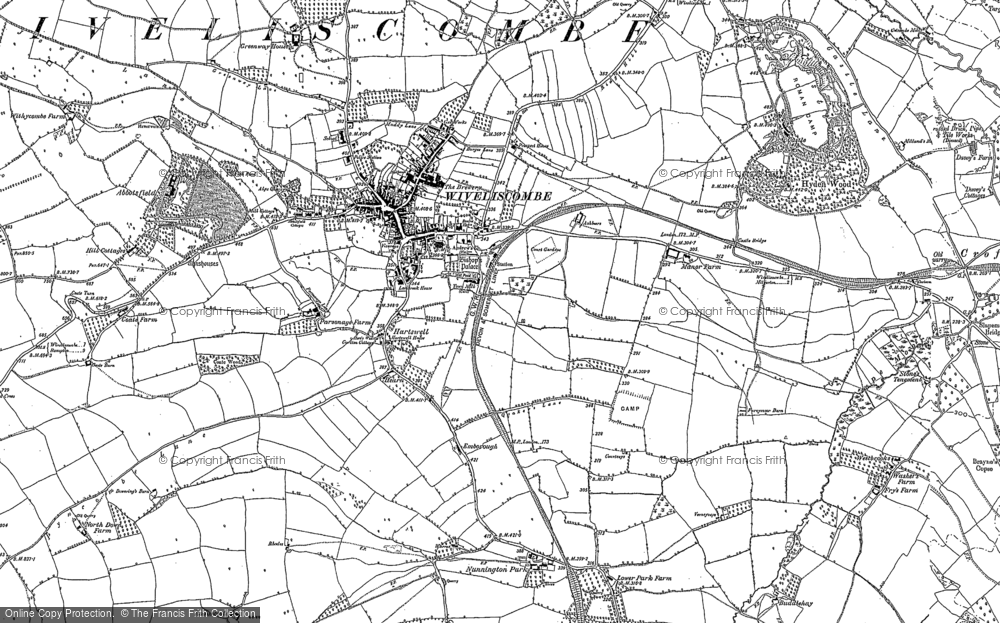