Woking County School For Girls - a Memory of Woking.

This is a picture of the main entrance gates of Woking County School for Girls, known as the Girls' Grammar School, at the corner of East Hill and Old Woking Road. Girls were never permitted to use these gates: alternative means of access were to the right and left of the gates shown in this pic. The bus-stop that pupils used to travel into Woking was immediately opposite this entrance, probably just about where the photographer would have been standing when this photo was taken.

Add your comment
Report abuse
Sun Jan 24th 2021, at 11:56 am
Jacqui Hemming commented:
I spent my entire senior school life at WCGSG, leaving in 1969. During those years I never used these gates. It was an excellent school and I was very happy there; the buildings were light, clean and well equipped. The doors in the photograph opened into Central Corridor where the school offices, including the office of Miss Hill, the headmistress, were located. We weren't allowed to run or talk in that corridor; doing so risked censor by the patrolling prefects. In addition to the modern library, I remember the language laboratory with its headphones and cassettes, quite an innovation for the time, science labs and an airy gym where we excitedly replicated the annual Boat Race. This took place on a map of the Thames marked out on the gym floor, on which lines of pennies, contributed by the girls, were laid end to end in parallel lines by the competing house teams to the sound of raucous encouragement. The pennies were donated to a local charity after the event. We benefited from extensive grounds with tennis courts, hockey pitches and an athletics track, although the rabbit and guinea pig club was more to my taste. We took it in turn to bring the animals home to care for during the holidays; not sure my mother shared my enthusiasm, she probably ended up doing most of the clearing out of cages. Happy memories.
Add your comment
Report abuse
Mon May 2nd 2016, at 3:50 pm
garnfach commented:
I remember the school being built and how excited we became as it neared completion. I was in the sixth form when we moved from the old army huts, and we had spent weeks packing up the library ready for its move. The new library was breathtaking, spacious, light and airy. The rest of the school was equally impressive, especially after spending the previous five years in Nissen huts, which often meant getting wet moving from one classroom to the next.
As a member of the Sixth Form we were housed on the upper floor, close to the library. I remember small seminar rooms, warm and cosy, but interlinked. If they were in use it meant a trip down the stairs, a stroll along the corridor, then up the next staircase to access the rest of the floor.
I spent only a few months in this "palace" but have good memories.
Add your comment
Report abuse 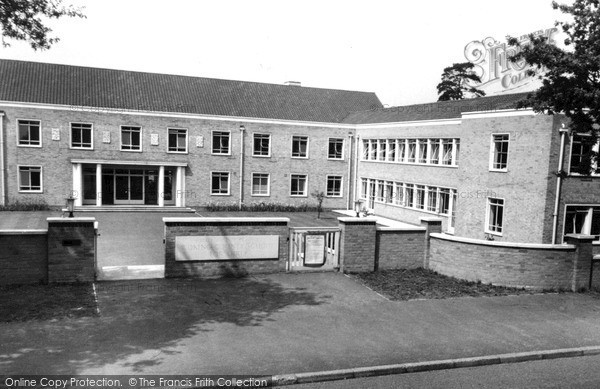